Looking to Get Cops Off Your Campus? Start Here. 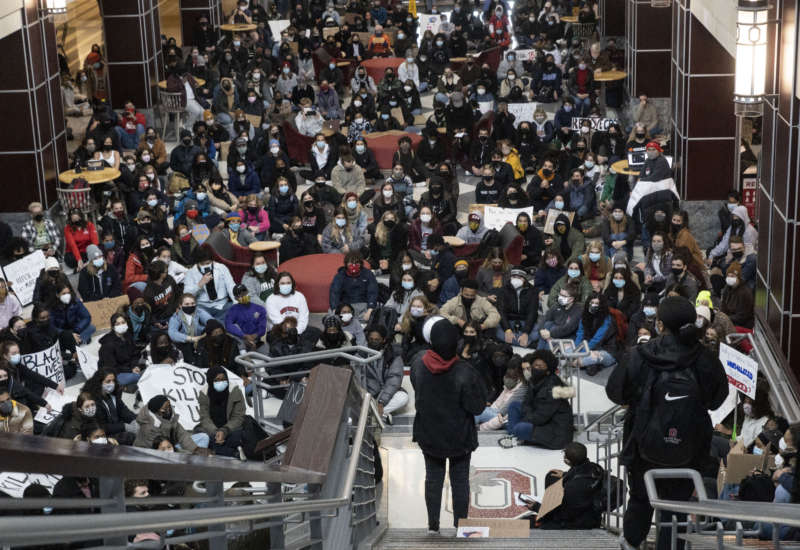 The police-perpetrated murder of George Floyd and the subsequent uprising in June 2020 galvanized campus organizing. Almost immediately, students at Hostos Community College named the racism inherent in policing and demanded their campus cut ties with the New York City Police Department. Students at Columbia University and Howard University launched tuition strike campaigns — a refusal to pay any tuition — demanding the divestment from Israel, the defunding of campus police departments, and the severing ties with local and federal policing agencies. A student-led coalition at the University of Minnesota successfully severed relationships with the local police. (However, simultaneously, the university almost immediately began to hire additional private security forces.)

With the fall 2021 semester seeing students filter tentatively back to in-person classes at colleges and universities across Turtle Island, assessment and study is overdue: What have we learned from a year of organizing? How are networks responding to emerging cul-de-sacs, or dead ends and false openings? What solidarities have been made possible? As two organizers and educators, in this spirit of study and movement-building, we share our reflections on the past year’s work — successes, challenges and experiments.

Many campaigns and projects produced potent materials that aimed to educate people about the long racist histories of policing, particularly on campuses, with concrete tactics for abolitionist struggle. The University of Oregon’s critical history of policing timeline Instagram account offers crucial examples of the racialized violence perpetrated by police on that campus, while Critical Resistance Abolitionist Educators’ “How to Grow Abolition on Your Campus: 8 Actions” provides entry points for abolitionist organizing, including starting abolitionist study groups and challenging discriminatory policies for college access. Timelines and tools like these not only continue to circulate and to support ongoing political education, but also often function effectively to archive crucial abolitionist campaigns and modes of resistance.

Over the last two years, campus-based unions have included demands to defund police in bargaining and also worked horizontally to push for police unions to be removed from wider coalitions and the network of organized labor. In 2018 in Davis, California, the campus-based labor union, UAW 2865, representing the Coalition of Graduate Employee Unions passed a proposal across the table calling for disarming and demilitarizing campus police. By 2020, other labor unions were taking up variations of these same demands: The striking Graduate Employees’ Organization at the University of Michigan in Ann Arbor demanded a 50 percent cut to the Division of Public Safety and Security budget and that the university “cut all ties with police, including Ann Arbor Police Department (AAPD) and Immigration and Customs Enforcement (ICE).” Similar organizing took place within the Professional Staff Congress at CUNY and the Graduate Student Organizing Committee at New York University. More widely, organized labor is struggling to engage abolition, and campuses are one site to push this analysis and these demands.

Those with a badge and a uniform are not the only entities regulating and punishing on campus. Most academic disciplines actively naturalize and expand policing: For example, at Lehman College in the Bronx, students seeking access to the campus food pantry had to be accompanied by campus police, demonstrating the intimacy of student affairs offices and campus police departments. Abolitionist organizing on campus extends beyond defunding the police and involves building forms of community and developing authentic responses to harm that meet people’s needs. Initiatives — often pushed by campus feminists — offer responses to sexual assault that are non-carceral: Brown University’s Transformative Justice Program — created before the summer 2020 uprising — offers survivor-centered abolitionist engagements to gendered and sexual violence. By providing free, fresh vegetables, the Kingsborough Community College Urban Farm works to meet the needs of students and community members, and positions the college as centered around care — or advancing a mission of what Ruth Wilson Gilmore calls “life-affirming institutions.” Dissenters, a newer national anti-militarization network, is supporting (and paying student staff members) to develop campus-based organizing infrastructure to challenge militarization. All of these initiatives, and more, are doing the affirmative work of building abolition.

People want to feel safe. While many readers may be involved in abolitionist organizing, for some audiences, these demands are new. Organizing must include opportunities for people to talk, build and strengthen practices of safety. Our understanding of safety acknowledges that many people are unsafe on today’s heavily policed campuses, particularly those that are non-white. Over the last year, multiple webinars, teach-ins and days of action unfolded that created dialogues not only about the violence of policing, but other ways to ensure that communities were strong and safe. Abolition feminists have proliferated discussions of safety, such as at the University of Massachusetts where students, outraged by the prevalence of sexual violence on campus and the university’s persistent failure to respond, pushed out and visibly occupied space on campus. At Columbia University, Black and/or feminist organizers have resisted the university’s definition of safety through policing, demanding instead 24/7 access to counseling and rape crisis services. Reimagining and redefining safety can be complex work that requires ongoing engagement — in community.

Make Visible the Tentacles of Policing

The landscape of campus policing is diffuse, with multiple public and private law enforcement actors sharing jurisdictions and creating borders well beyond the campus boundaries. The University of Chicago has one of the largest private police forces in the world, a trend among elite, historically white, private universities in predominantly Black neighborhoods and cities. Universities also create memoranda of understanding with policing agencies from nearby municipalities that both allow for non-university agencies to police campus and university police forces to roam off campus. Agreements like these led to the detention of Black Lives Matter protesters in the University of California Los Angeles’s Jackie Robinson Stadium by the Los Angeles Police Department in 2020 and also were behind the 2020 shooting of Stephanie Washington by Yale Police Officer Terrance Pollock in a New Haven neighborhood. For some campus police departments, such as the University of California Police Department, the entire state is within their jurisdiction. One key outcome of last year’s campus uprisings was highlighting the massive and multi-faceted infrastructures of policing that unfold on campuses and in adjacent communities.

Work Across Borders to Craft Coalitions

By necessity, defund campaigns clearly moved across the artificial on-campus/off-campus boundaries, and demanded the abolition of all policing everywhere. Collaborations across borders of all kinds are generative. For example, Abolition May, a Turtle Island-wide campaign orchestrated by the Cops Off Campus Coalition, and the intergenerational organizing by CUNY for Abolition and Safety and the Release Aging People in Prison campaign, create linkages between sites, institutions and people that may initially seem disparate. Solidarity, not borders, will move us toward the horizon of abolition and liberation.

Learn From Organizing at Other Educational Sites and History

Pre-K-12 organizing has more recent militant histories demanding (and winning) police-free schools. The Black Organizing Project in Oakland, California, struggled for almost a decade before successfully removing police from pre-K-12 schools in June 2020. Post-secondary educational sites can learn from these K-12 struggles and from our own histories of resistance and repression. For example, tuition strikes have historically made visible struggles against austerity and policing. In the wake of the student movements of the 1960s, both campus police budgets and college tuition increased exponentially, in order to manage dissent and privatize education. As Ronald Reagan noted without any irony, “Those on UC campuses to agitate and not to study might think twice before they pay tuition, they might think twice how much they want to pay to carry a picket sign.” It is always a good time to study.

Centering the analysis and demands of systems-impacted people (those who experience the violence of prisons, policing and related systems of violent control — a population overwhelmingly Black, poor, Indigenous and/or queer) surfaces other key ways that post-secondary education must shift. These networks have deepened the movement to “ban the box” — a demand that applications for admission or employment not ask about histories of arrest or conviction. In California, formerly incarcerated students founded and lead the Underground Scholars Initiative, an organization that creates a prison-to-university pipeline by providing support and community, and access to resources and members engage in organizing and advocacy to create a world without prisons. Centering the experiences and needs of these learners also renders visible other imperatives: From the need for paid child care, free tuition and gender-affirming and accessible bathrooms, to the importance of divesting from pension plans that profit from incarceration and resource extraction, the organizing of systems-impacted people presents an expansive challenge to the university as it is and a vision for the university as it could be.

Higher education administrations respond to these militant and organized campus-based abolitionist campaigns with too familiar tactics: cooptation and absorption and also swift repression. For instance, calls for abolition are met with institutional responses: the creation of hollow task forces and working groups charged with “studying the issue” or a hasty invitation to a high-profile (and usually highly paid) racial justice or equity consultant or guest speaker. Yet more task forces to research the problems and suggest the alternatives are not needed. Campus policing needn’t be researched further when the demand is clear: Defund and abolish campus policing.

Where Do We Go From Here?

While the fall 2021 pace of organizing feels like simmer rather than a boil on many campuses, we know not only is the work continuing, but the organizing from the previous year has reshaped the landscape. Campus communities — from undergraduate students and dining hall workers, to adjunct faculty and neighborhood residents — are joining forces to counter policing in and by universities. As we build coalitions, reflect on strategy and study together, we continue to build a movement, one that extends from the graduate union picket line to the mutual aid distribution site. Find your comrades, and join this beautiful movement to get cops off campus and build the spaces and places for abolitionist teaching and learning in our communities. Abolition now!