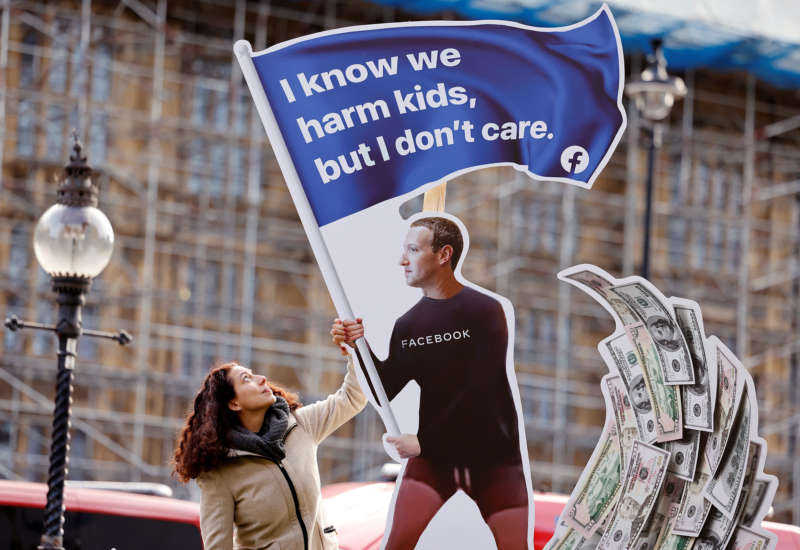 Internal documents dubbed “The Facebook Papers” were published widely Monday by an international consortium of news outlets who jointly obtained the redacted materials recently made available to the U.S. Congress by company whistleblower Frances Haugen.

The papers were shared among 17 U.S. outlets as well as a separate group of news agencies in Europe, with all the journalists involved sharing the same publication date but performing their own reporting based on the documents.

According to the Financial Times, the “thousands of pages of leaked documents paint a damaging picture of a company that has prioritized growth” over other concerns. And the Washington Post concluded that the choices made by founder and CEO Mark Zuckerberg, as detailed in the revelations, “led to disastrous outcomes” for the social media giant and its users.

From an overview of the documents and the reporting project by the Associated Press:

The papers themselves are redacted versions of disclosures that Haugen has made over several months to the Securities and Exchange Commission, alleging Facebook was prioritizing profits over safety and hiding its own research from investors and the public.

These complaints cover a range of topics, from its efforts to continue growing its audience, to how its platforms might harm children, to its alleged role in inciting political violence. The same redacted versions of those filings are being provided to members of Congress as part of its investigation. And that process continues as Haugen’s legal team goes through the process of redacting the SEC filings by removing the names of Facebook users and lower-level employees and turns them over to Congress.

One key revelation highlighted by the Financial Times is that Facebook has been perplexed by its own algorithms and another was that the company “fiddled while the Capitol burned” during the January 6th insurrection staged by loyalists to former President Donald Trump trying to halt the certification of last year’s election.

CNN warned that the totality of what’s contained in the documents “may be the biggest crisis in the company’s history,” but critics have long said that at the heart of the company’s problem is the business model upon which it was built and the mentality that governs it from the top, namely Zuckerberg himself.

“The latest whistleblower revelations confirm what many of us have been sounding the alarm about for years,” said Jessica J. González, Free Press Action co-CEO, on Friday following reporting based on Haugen’s disclosure.

“Facebook is not fit to govern itself,” said González. “The social-media giant is already trying to minimize the value and impact of these whistleblower exposés, including Frances Haugen’s. The information these brave individuals have brought forth is of immense importance to the public and we are grateful that these and other truth-tellers are stepping up.”

While Zuckerberg has testified multiple times before Congress, González said nothing has changed. “It’s time for Congress and the Biden administration to investigate a Facebook business model that profits from spreading the most extreme hate and disinformation,” she said. “It’s time for immediate action to hold the company accountable for the many harms it’s inflicted on our democracy.”

With Haugen set to testify before the U.K. Parliament on Monday, activists in London staged protests against Facebook and Zuckerberg, making clear that the giant social media company should be seen as a global problem.

Flora Rebello Arduini, senior campaigner with the corporate accountability group, was part of a team that erected a large cardboard display of Zuckerberg “surfing a wave of cash” outside of Parliament with a flag that read, “I know we harm kids, but I don’t care” — a rip on a video Zuckerberg posted of himself earlier this year riding a hydrofoil while holding an American flag.

While Zuckerberg refused an invitation to tesify in the U.K. about the company’s activities, including the way it manipulates and potentially harms young users on the platform, critics like Arduini said the giant tech company must be held to account.

“Kids don’t stand a chance against the multibillion dollar Facebook machine, primed to feed them content that causes severe harm to mental and physical well being,” she said. “This industry is rotten at its core and the clearest proof of that is what it’s doing to our children. Lawmakers must urgently step in and pull the tech giants into line.”

Happening now: we are outside UK parliament with a visual protest against Facebook’s treatment of children and its business model which puts profit before public safety. (1/7) #PeopleVsBigTech pic.twitter.com/37UA18PL3r

“Right now, Mark [Zuckerberg] is unaccountable,” Haugen told the Guardian in an interview ahead of her testimony. “He has all the control. He has no oversight, and he has not demonstrated that he is willing to govern the company at the level that is necessary for public safety.”