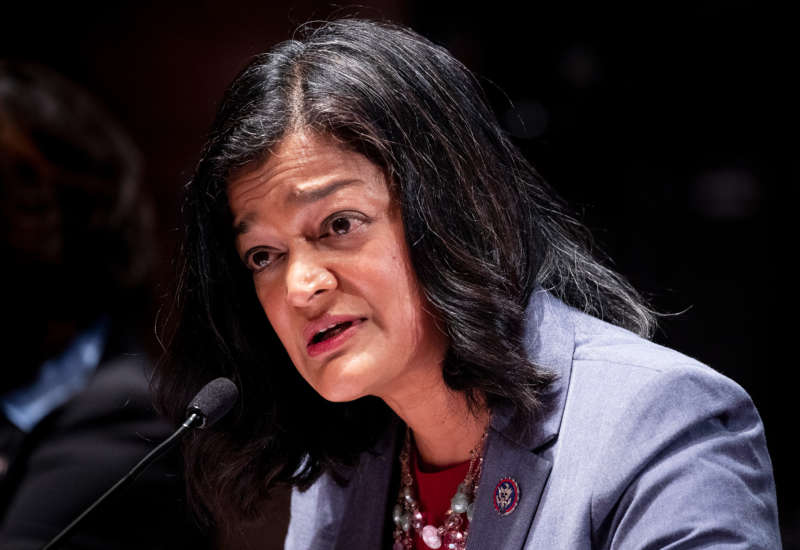 U.S. House progressives led by Reps. Pramila Jayapal, Alexandria Ocasio-Cortez, and Cori Bush dug in their heels Tuesday as right-wing Democrats attempted to salvage a $1.2 trillion infrastructure bill while sidelining the more ambitious Build Back Better package championed by the party’s left wing and President Joe Biden until after the weaker bipartisan legislation is passed.

Bloomberg reports House Speaker Nancy Pelosi (D-Calif.) and congressional Democratic leadership insisted that a framework agreement on the budget reconciliation bill would be sufficient for lawmakers to proceed with a separate vote on the $1.2 trillion bipartisan infrastructure legislation delayed by progressives earlier this month over concerns that their $3.5 trillion package would be sacrificed.

CNN chief congressional correspondent Manu Raju tweeted that after Pelosi “pushed back on progressives’ demands” that a “larger bill must pass [the] House first before they agree to vote for infrastructure,” Jayapal (D-Wash.) asserted that a framework was unacceptable.

“Our members don’t want to do that,” Jayapal said of the Congressional Progressive Caucus she chairs.

On whether there are still more than half of her caucus who hold this position, Jayapal said: “I haven’t made my way all the way through the list, that’s what I’m doing. But I would say we have several dozen.”

Pressed if she would vote against the infrastructure bill absent anything more than a framework on the larger bill, Jayapal told Raju that “at this point, there are dozens of our members who are in that place.”

Ocasio-Cortez (D-N.Y.) agreed with Jayapal, telling Bloomberg that “a mere framework is not enough.”

“We need to have a vote ready for the Build Back Better plan, not a framework,” she insisted. “We want to have both of these votes together.”

A resolute Bush (D-Mo.) also dismissed talk of a framework agreement, tweeting simply, “It’s not enough for me. And there are more of us.”

It’s not enough for me.

And there are more of us. https://t.co/QxBdgocrgg

The impasse came as Bloomberg and others reported Democratic leadership is working to reduce the $3.5 trillion Build Back Better bill favored by the president and progressives to less than $2 trillion.

Some progressives took aim at right-wing, corporate-backed Democrats — namely, Sens. Joe Manchin (W.Va.) and Kyrsten Sinema (Ariz.) — who have relentlessly worked to shrink the size and scope of the reconciliation package.