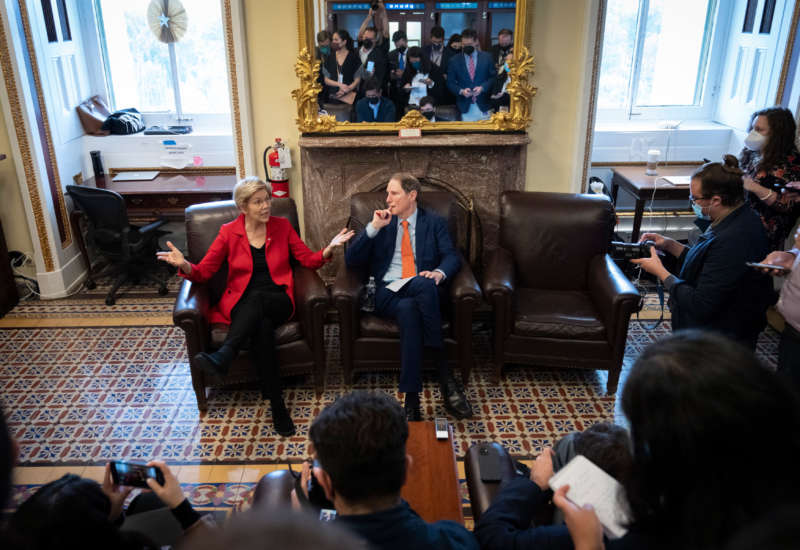 As Democrats run out of options for funding their shrinking reconciliation bill, key senators including Sen. Elizabeth Warren (D-Massachusetts) have introduced a bill that would ensure that large corporations pay a minimum tax rate. This would prevent companies from exploiting the tax system to pay a zero or negative effective tax rate.

The Corporate Profits Minimum Tax would levy a 15 percent minimum tax on profits over $1 billion based on profits that the corporations report to the shareholders, or book profits — rather than profits that corporations report to the government, which they often deflate to dodge higher tax rates. The tax would apply to about 200 companies and could raise hundreds of billions for the government over the next decade, the lawmakers say.

The statutory corporate tax rate of 21 percent, hacked down from 35 percent by Republicans in 2017, wouldn’t be affected by this proposal. Sen. Kyrsten Sinema (D-Arizona) has stood staunchly against raising the corporate tax rate, as she enjoys close relationships with conservative lobby groups and corporations.

“Giant corporations have been exploiting tax loopholes for too long, and it’s about time they pay their fair share to help run this country, just like everyone else,” said Warren. “The Corporate Profits Minimum Tax would end corporate double dealing and ensure companies pay something in taxes when they report billions in profits to their shareholders.”

Bill co-introducer Sen. Angus King (I-Maine) emphasized that corporations should play a larger role in funding the government. “In 1965, corporations paid roughly 4 percent of the nation’s GDP in state and federal income tax. Today, that rate is only 1 percent,” King said. “This massive decline has contributed to the nation’s rising debt and threatened basic public sector services Americans rely upon.”

The bill is similar to a proposal that Warren introduced earlier this year, which would create a 7 percent tax on every dollar of profit above $100 million that corporations report to their shareholders. That bill is slightly more expansive and could raise $700 billion over a decade.

This week’s legislation was introduced by Warren and King and Senate Finance Committee Chair Ron Wyden (D-Oregon). Wyden is a key figure in the reconciliation bill as he chairs the committee responsible for crafting the tax proposals in the bill. The proposal is cosponsored by Senators Michael Bennet (D-Colorado), Ed Markey (D-Massachusetts) and Sheldon Whitehouse (D-Rhode Island).

The proposal is similar to a proposal that the White House has advocated for in recent weeks, as Democrats scramble to find tax proposals that could pay for the reconciliation bill. With Sinema and Sen. Joe Manchin (D-West Virginia) opposing proposals to hike tax rates on corporations and the wealthy — and with Sinema opposed to the extremely popular, crucial revenue-raising proposal to lower prescription drug prices — Democrats find themselves having to propose increasingly obscure ways to raise revenue.

Sinema is surprisingly in favor of the corporate minimum tax. “This proposal represents a commonsense step toward ensuring that highly profitable corporations — which sometimes can avoid the current corporate tax rate — pay a reasonable minimum corporate tax on their profits,” she said in a statement.

Sinema’s statement is ironic considering that her opposition to raising the corporate tax is part of why corporations can avoid paying taxes, since the low rate makes it easier for corporations to push down their effective tax rate. Further, she’s shown little interest in closing loopholes that allow corporations to dodge the statutory tax rate, suggesting that her statement may be disingenuous.

Still, garnering the support of Sinema is huge in today’s politics, since she and Manchin are the Democrats’ biggest roadblocks to passing bills in Congress. The duo has already gotten their way with the reconciliation bill, succeeding in cutting it by nearly half despite objections from progressive lawmakers.

Although no Democrats have objected to the tax proposal, it’s unclear if Manchin supports it. Outlets reported earlier this week that Manchin was generally supportive of the White House’s proposals for a corporate minimum tax and a billionaire tax, but more recent reporting has found that Manchin may not actually be in support of the billionaire tax, which would only levy a tax on the investment incomes of the top 0.0002 percent wealthiest Americans.