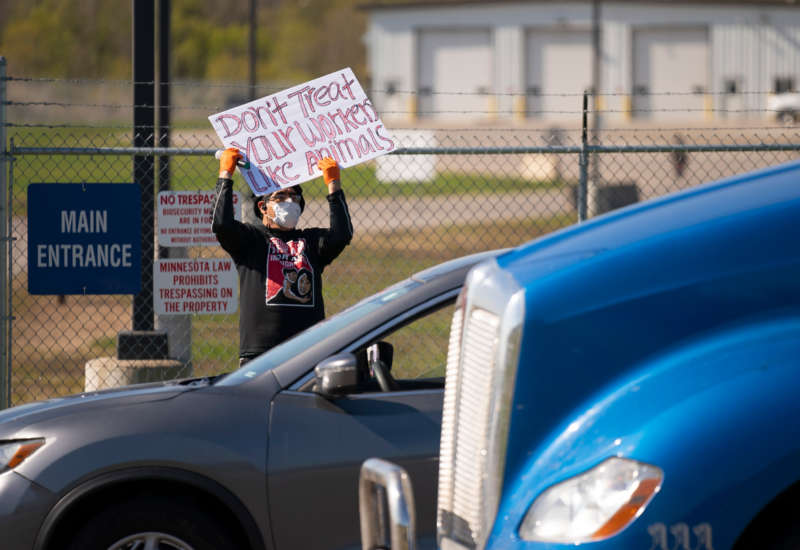 It was already clear that meatpacking plants hosted some of the country’s worst COVID-19 outbreaks. But a congressional investigation released in late October revealed just how dire the situation is. The COVID-19 infection and death toll in slaughterhouses run by the country’s largest meat conglomerates is now nearly three times higher than previously estimated. Considering the hazards cited by the report — crowded assembly lines, lax screening precautions, sweat-saturated masks and barriers made with “flimsy ‘plastic bags on frames’” — it’s little surprise that in some plants, more than half of workers have contracted the virus.

Emails obtained by the House Select Subcommittee on the Coronavirus Crisis investigation paint a picture of executives who aggressively pushed back against safety measures in the pandemic’s early days. The CEO of Smithfield Foods, for example, called the Centers for Disease Control and Prevention’s (CDC) recommendations “problematic” and lamented that touchless mask distribution would cause each employee to miss 30 seconds of work. Meanwhile, Smithfield workers were filing complaints that they were not spaced six feet apart, were denied breaks and couldn’t breathe through masks saturated with sweat. Others said their production line was so quick, they weren’t able to turn away to cough. “If you’re not in a casket, they want you there,” former Smithfield worker Sonja Johnson told The Washington Post.

“The lack of care and the lack of interest in providing workers with the most basic protections by the companies is shocking,” said Magaly Licolli, director of an Arkansas-based poultry worker organization, in a recent Food Chain Workers Alliance report on frontline worker organizing. “With this pandemic it’s about fighting or dying. There is no other option.”

According to October’s congressional investigation, the biggest meat conglomerates “prioritized profits and production over worker safety,” a practice that is unfortunately all too common in an industry that employs primarily BIPOC workers. Around 44 percent of workers in the animal slaughtering and processing industry nationwide are Latinx and 25 percent are Black, while more than half of frontline meatpacking workers are immigrants. And according to a CDC report, 87 percent of meatpacking workers infected with COVID-19 in summer 2020 were racial or ethnic minorities. In Iowa, another study found that only 18 percent of infected meatpacking workers were white.

Meat processing plants were dangerous places to work even before the pandemic. And while the Occupational Safety and Health Administration (OSHA) — the federal agency responsible for ensuring workers’ safety — acknowledges the presence of hazards like noise, dangerous equipment, slippery floors, repetitive motions, hazardous chemicals and exposure to airborne pathogens in slaughterhouses, it provides only limited protections from these dangers through its general standards that apply across industries.

When it comes to air quality, in particular, OSHA has failed to develop standards for any sector — even though meat-processing facilities are notorious for spreading viruses due to temperature and humidity levels that encourage pathogens to thrive. OSHA has also failed to adopt standards to protect workers from musculoskeletal disorders, a particularly severe problem in the poultry industry. Instead, OSHA has largely developed “nonbinding guidance” for employers or unsuccessfully attempted to invoke the OSHA Act’s general duty clause — which requires employers to ensure the workplace is free of “recognized hazards.” It has generally been understood as a backstop in the absence of specifically applicable standards but is difficult for the agency to justify when challenged.

OSHA also issued “nonbinding guidance” during COVID-19 when, as the congressional investigation argues, it should have issued an Emergency Temporary Standard to protect workers. As a result, meatpacking companies were left largely unchecked. Investigators describe this as a “political decision” by OSHA leadership under former President Trump. Yet even under the Biden administration, the agency has still not implemented those sorely needed safety rules — or so many of the others that could help to curb the health hazards and injustices facing workers.

On his first day as president, Joe Biden signed an executive order on advancing racial equity and claimed he would make racial equity and support for underserved communities “the business of the whole government.” Protecting marginalized workers must be central to this strategy for it to succeed. By implementing workplace protections in key industries like meatpacking, OSHA now has the chance to address the disproportionate impact of health hazards and promote racial equity in industries employing BIPOC workers long left unprotected due to the nonexistence of binding regulatory standards.

Fortunately, there are signs of progress. In September, the Biden administration announced new initiatives at OSHA to address heat hazards in the workplace — a dangerous issue that disproportionately impacts immigrant farmworkers, and for which OSHA has never had an enforceable national standard. OSHA launched a rulemaking process on October 27 to finally create such a standard, which will replace its previous “nonbinding guidance.”

This is a significant step in the right direction. It will save lives. But when it comes to remedying the disproportionate impacts of hazardous workplaces, it is just the beginning. Meat-processing workers deserve protection, too.

For years, slaughterhouse workers and their advocates have been calling for a slowdown to increasing factory line speeds, which crowd workers closer together and raise their risk of injury. They’ve asked for strengthened inspection programs that address not only food safety, but worker safety, and allow workers to designate a representative to accompany inspectors. And they’ve demanded that their basic rights — to bathroom breaks, to leave from work due to medical and other emergencies, and to protection from retaliation when filing complaints — be respected. Federal legislation could address many of these longstanding issues to protect workers over the long term, in addition to compelling OSHA to create emergency pandemic standards.

Advocates are also calling on OSHA to keep a record of pandemic-related infections and deaths, including the racial demographics of those affected. Because — as October’s congressional investigation shows — lives are lost when companies aren’t held publicly accountable for protecting their workers. As long as these companies continue to prioritize profits over people, the federal government can no longer stand aside and must step in to uphold safety, equity and justice for the workers our food system depends on.

US Buys $290M of Anti-Radiation Drug For “NUCLEAR EMERGENCY” While Nord Stream Inspection is BLOCKED!!!

US Buys $290M of Anti-Radiation Drug For “NUCLEAR EMERGENCY” While Nord Stream Inspection is BLOCKED!!!