Trump-Allied Lawyers Ordered to Pay $187,000 in Fees for Their Election Lawsuit 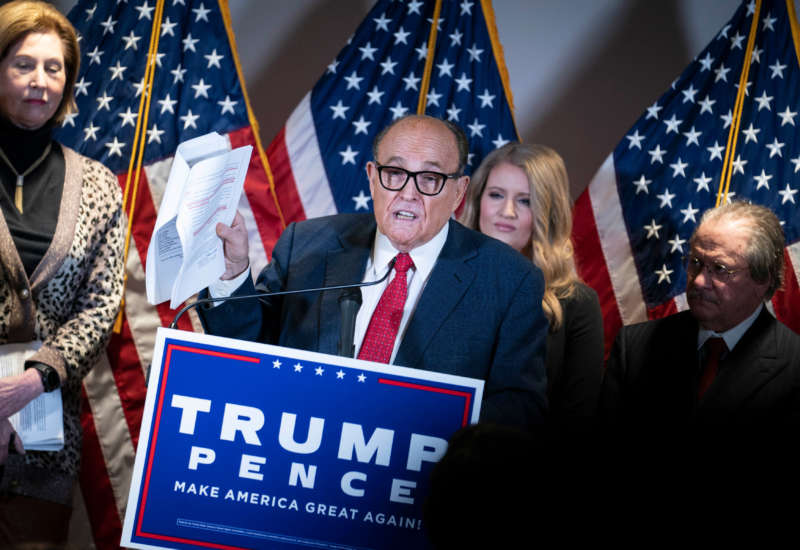 A federal judge in Colorado has ordered two Donald Trump-allied lawyers to pay a hefty fee for a lawsuit over the 2020 election that the judge had panned — and dismissed.

The December 2020 lawsuit, which was dismissed in April, was brought by two Colorado lawyers as a class-action case on behalf of the nearly 160 million people who voted in the 2020 election. They alleged that Dominion Voting Systems, Facebook and several elected officials had been involved in a plot to steal the election from Trump, even though there is no evidence for this claim. The lawyers sought $160 billion in damages.

The judge panned the lawsuit, reports The Washington Post: “Albeit disorganized and fantastical, the Complaint’s allegations are extraordinarily serious and, if accepted as true by large numbers of people, are the stuff of which violent insurrections are made.”

He ordered the duo to pay $187,000 in legal fees in order to deter similar cases from being brought in the future. The two lawyers, who were sanctioned by the judge earlier this year, will have to pay $50,000 each to Facebook and $62,930 each to Dominion and Center for Tech and Civic Life, a Facebook-affiliated organization that was also named in the case.

“[T]he repetition of defamatory and potentially dangerous unverified allegations is the kind of ‘advocacy’ that needs to be chilled. Counsel should think long and hard, and do significant pre-filing research and verification, before ever filing a lawsuit like this again,” Magistrate Judge N. Reid Neureiter wrote. “I believe that rather than a legitimate use of the legal system to seek redress for redressable grievances, this lawsuit has been used to manipulate gullible members of the public and foment public unrest.”

The two lawyers had attempted to appeal the order, dubiously claiming that the lawsuit had nothing to do with Trump. In their original filing, the lawyers quoted a Trump tweet falsely claiming that Dominion “deleted 2.7 million Trump votes nationwide.”

There is no evidence for this conspiracy theory that has been largely embraced by conservatives due almost solely to attempts by Trump, his team and sympathetic media outlet to sow doubt in elections.

According to The Washington Post , this ruling is one of the first attempts by a judge to put a price tag on a punishment for the dozens of lawyers who filed election lawsuits over the past year. Trump and his team had filed many lawsuits in attempts to overturn the election, all of which failed.

Earlier this year, a judge sanctioned Sidney Powell, Lin Wood and other lawyers who had worked on Trump-allied lawsuits and ordered them to pay attorney’s fees in a Michigan case brought over false election fraud claims. Trump’s top lawyer, Rudy Giuliani, was disbarred in June by a New York court for his role in perpetuating the former president’s election lies.

Though the strategy to file lawsuits over the election didn’t work out for the Trump team, the overall strategy paid out in spades, opening avenues for Republicans to openly skew elections in their favor by rewriting local laws and engaging in more aggressive gerrymandering.

Republicans in key states like North Carolina and Ohio are charging ahead with racist district maps that give the GOP an edge in the 2022 midterms.

GOP electeds have filed and passed law after law in nearly every state to suppress voters as an extreme and alarming reaction to Trump’s loss in 2020.