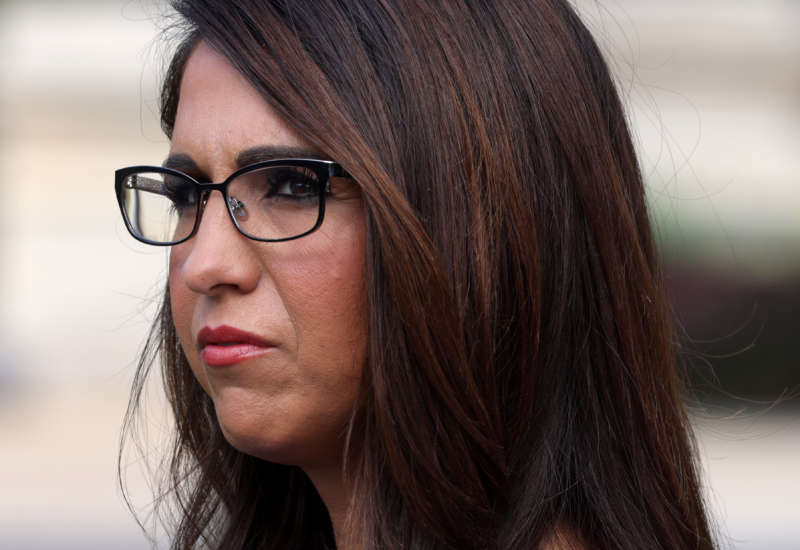 A group of Democrats is waging a campaign to get far right Rep. Lauren Boebert (R-Colorado) removed from her committee assignments after it was revealed that she made Islamophobic comments about Rep. Ilhan Omar (D-Minnesota) at a recent event.

According to Politico, the Democrats are seeking a punishment for Boebert similar to ones that have already been levied on Representatives Marjorie Taylor Greene (R-Georgia) and Paul Gosar (R-Arizona) after the extremist right-wing lawmakers made hateful and violent comments toward Democrats.

A video posted on Facebook showed Boebert recounting a story about a Capitol police officer running to an elevator that Omar and Boebert were standing in. According to Boebert, the police officer thought that Omar was a terrorist, to which Boebert allegedly responded, “Well she doesn’t have a backpack, we should be fine.” She also referred to Omar as part of the “jihad squad,” a bigoted insult waged toward progressive lawmakers by Republicans.

Omar has said that the entire story was fabricated. But Republican officials have applauded the story for supposedly reflecting the bigoted fears of the American public.

The Minnesota lawmaker condemned Boebert on Twitter, saying “Fact, this buffoon looks down when she sees me at the Capitol, this whole story is made up. Sad she thinks bigotry gets her clout.”

“Anti-Muslim bigotry isn’t funny and shouldn’t be normalized,” Omar continued. “Congress can’t be a place where hateful and dangerous Muslims tropes get no condemnation.” She then pointed out that normalizing Islamophobia in Congress can also endanger the lives of Muslims across the country.

Omar later rebuked Republican leaders for repeatedly ignoring the Islamophobia that has been waged against her, noting that on her first day in Congress, Republican Rep. Steve King (Iowa) implied on Twitter that she was a terrorist because of her faith. “These anti-Muslim attacks aren’t about my ideas but about my identity and it’s clear. [Minority Leader Kevin McCarthy,] your silence speaks volumes.”

Progressive lawmakers also condemned Boebert for the incident. The Congressional Progressive Caucus wrote that the “Anti-Muslim bigotry” expressed by Boebert “has no place in Congress or anywhere. It is past time [McCarthy] respond to the dangerous rhetoric from his caucus.”

In lieu of McCarthy punishing Boebert for the move, which is unlikely, Democrats could take action similar to what they did for Gosar just weeks ago: filing and passing a resolution to censure Boebert and remove her from committee assignments. Gosar had posted a video on social media depicting an anime version of him killing Rep. Alexandria Ocasio-Cortez (D-New York) and moving in to attack President Joe Biden; in censuring him, Democrats sent a rebuke to Republicans.

The House also voted in February to remove Taylor Greene from her committee assignments, stripping her of much of her voting power in the chamber. The Georgia extremist had supported violence toward Democrats online and spewed baseless conspiracy theories denying 9/11, sprinkling in virulent racism and anti-Semitism along the way.

It’s unclear if Democrats have the momentum to take similar action against Boebert, who has apologized — disingenuously, as critics have noted — for her remarks. Her apology was likely politically motivated, however. Gosar stood behind his video even after it was taken down and never apologized for it, even as he was being censured. Making a small concession, however deceitful, could help Boebert avoid a similar fate.