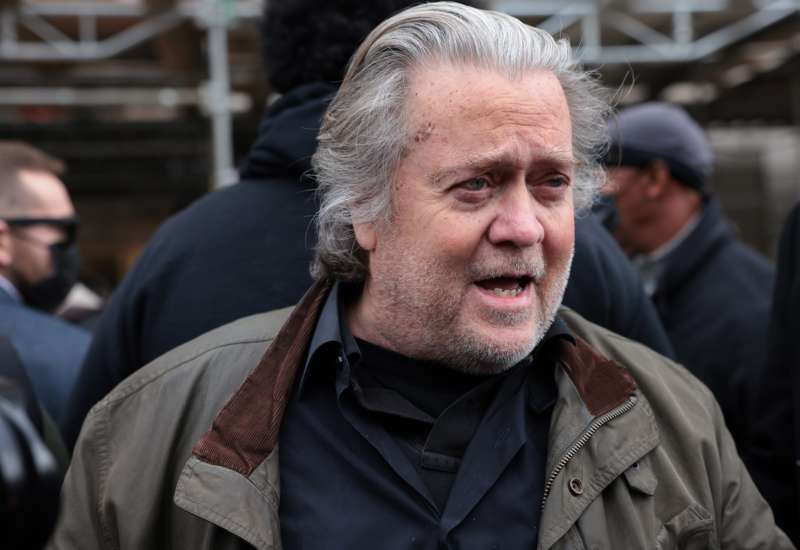 On Sunday night, the United States Department of Justice (DOJ) filed a 10-page briefing accusing Steve Bannon’s lawyers of trying to issue “frivolous” complaints to stir up public support for their client from Trump supporters.

Bannon, who is a former Trump advisor, faces contempt of Congress charges for refusing to adhere to subpoenas filed by the January 6 commission earlier this fall. While justifying his refusal to cooperate with the investigation into the Capitol attack, Bannon made dubious claims of executive privilege, asserting that he was unable to share relevant documents with the commission because it would violate Trump’s purported rights.

Legal experts say that such an argument rests on flimsy ground at best.

Bannon faces a year in jail for each of the two contempt charges.

The DOJ is currently seeking a protective order against Bannon and his lawyers to limit what he can say in public through the revelation of discovery documents provided to the defense team by the U.S. government. The department noted in its briefing that Bannon “has indicated he intends to publicly disseminate the materials for an improper purpose: to make extrajudicial arguments about the merits of the case pending against him and the validity of the Government’s decision to seek an indictment.”

The DOJ made clear that Bannon’s defense strategy has nothing to do with winning in the courtroom; rather, his strategy is to stir up trouble and gain support among the public.

“The defense’s misleading claims, failure to confer, unexplained wholesale opposition, and extrajudicial statements make clear the defense’s real purpose: to abuse criminal discovery to try this case in the media rather than in court,” the DOJ legal brief read.

The Justice Department noted a number of occasions where Bannon has made extraordinary comments to the media after being charged.

“I’m telling you right now, this is going to be the misdemeanor from hell for [Attorney General] Merrick Garland, [Speaker of the House] Nancy Pelosi and [President] Joe Biden,” Bannon said to reporters earlier this month, adding, without evidence, that Biden had ordered Garland to prosecute him.

Bannon’s commentaries also appear to be aimed at promoting himself to Trump loyalists. Shortly after Bannon surrendered to the FBI, he said in a promo for his radio show that he and his lawyers were “taking down the Biden regime.”

The DOJ added that the protective order is necessary because allowing Bannon to make such arguments outside of the court “will have the collateral effect of witness tampering” as his doing so will “expose witnesses to public commentary on their potential testimony before trial and allow a witness to review summaries of other witnesses’ statements recounting the same event or events.”

Bannon was subpoenaed back in September by the January 6 commission to provide evidence and give testimony relating to his involvement with the Trump campaign on the morning the Capitol was attacked. On his radio program earlier that day, Bannon had said that “all hell is going to break loose” when Congress met to certify the 2020 presidential election, which Trump lost to Biden.