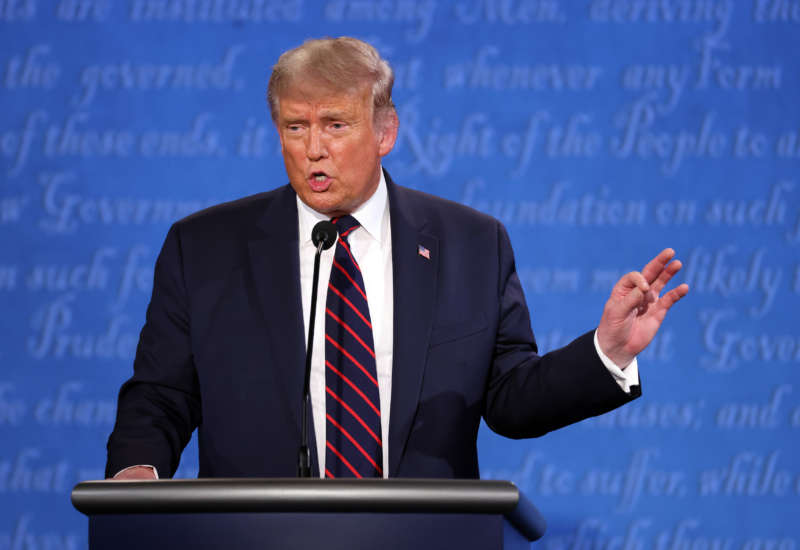 Details from an upcoming book reveal that Trump tested positive for coronavirus just a few days before his first presidential debate with Joe Biden.

The book is written by Mark Meadows, who served as chief of staff to former President Donald Trump during his final year in office. In response to reporting on the excerpt from Meadows’s book, Trump described the anecdote as “fake news” — a term he frequently uses to describe negative reporting on him, despite the fact that such reporting often turns out to be true.

Meadows’s book, titled The Chief’s Chief, offers an inside look at the Trump White House from the former chief of staff’s perspective. In the section detailing the days surrounding the first debate, Meadows recalls how Trump found out that he had tested positive for COVID-19 while on his way to a campaign rally in Pennsylvania on September 26.

The positive diagnosis shocked White House staff, Meadows wrote — even though the White House had just hosted a ceremony for then-Supreme Court nominee Amy Coney Barrett, an occasion that was later described as a “super-spreader” event due to the number of people who tested positive for coronavirus shortly after attending.

Sean Conley, Trump’s White House doctor, called while the former president was en route to the rally. “Stop the president from leaving. He just tested positive for Covid,” Conley said.

According to the former chief of staff, Trump responded to the news by saying expletives that rhymed with, “Oh spit, you’ve gotta be trucking lidding me.” (Meadows is a devout Christian and doesn’t swear.)

While still on his way to the rally, a second test using a different method was conducted with Trump’s sample. This test came back negative, a pronouncement that Trump interpreted as meaning that he had “full permission to press on as if nothing had happened,” Meadows wrote. However, Meadows “instructed everyone in [Trump’s] immediate circle to treat him as if he was positive” during the trip to the campaign rally in Pennsylvania.

Meadows also noted that in the days between Trump’s negative/positive test results and the first presidential debate, Trump looked tired and somewhat ill. Although Trump suspected he had a slight cold, he went to the debate anyway.

Trump avoided testing rules for that event, as he had arrived late and was unable to have a test conducted before the event began. Instead, debate officials took Trump at his word that he had recently tested negative for coronavirus.

Days later, Trump tested positive for COVID again, and soon after was admitted to Walter Reed National Military Medical Center for treatment. The former president blamed Gold Star military families for his infection, claiming they spread the virus at an event that took place after his initial positive test in late September.

In response to reporting on Meadows’s book, Trump didn’t explicitly deny that he had initially tested positive for COVID-19, but did imply that it was a false portrayal of events.

“The story of me having COVID prior to, or during, the first debate is Fake News,” Trump said in a statement. “In fact, a test revealed that I did not have COVID prior to the debate.”