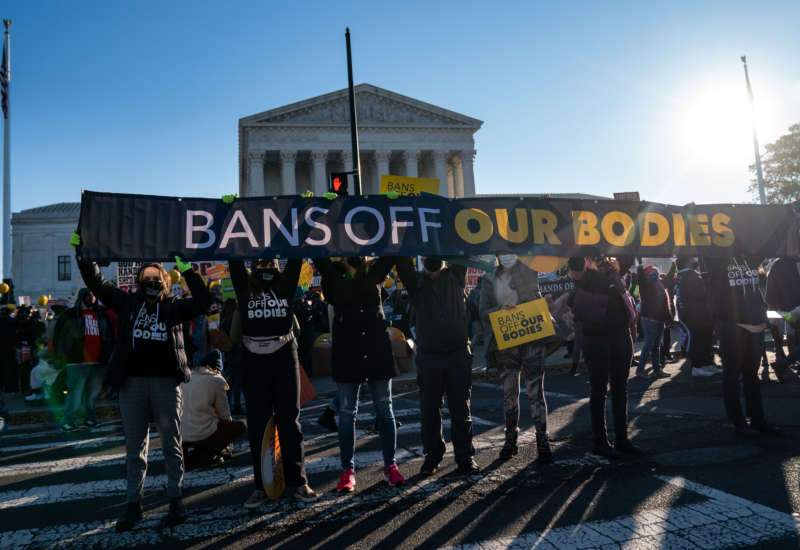 The U.S. Supreme Court this week heard oral arguments in Dobbs v. Jackson Women’s Health Organization, a high-profile case about the constitutionality of Mississippi’s ban on abortions after 15 weeks of pregnancy. The state’s Republican-controlled legislature passed the law, which has no exceptions for rape or incest, in 2018, with the intention that it would take effect if Roe v. Wade were overturned. That landmark 1973 case set out a legal framework that protected the right to an abortion until fetal viability at 24 weeks of pregnancy.

The Jackson Women’s Health Organization, Mississippi’s sole abortion provider, sued the state over the law, and the case ended up at the high court. As the Dec. 1 arguments unfolded there, the majority of justices on the conservative-dominated court appeared sympathetic to the arguments of Mississippi Solicitor General Scott Stewart, who rejected the idea of a constitutional right to abortion and said the issue should be left to the states. Katherine Kraschel, a lecturer at Yale Law School and a reproductive health policy expert, told the nonprofit newsroom The 19th that she previously thought Roe would be incrementally gutted but after hearing the oral arguments is now “more convinced that there are five justices poised to overturn Roe v. Wade.”

Abortion rights are already severely limited in the South, and 11 of the 26 states likely or certain to ban abortion should Roe fall are in the region, according to a Guttmacher Institute analysis from October: Alabama, Arkansas, Georgia, Florida, Kentucky, Louisiana, Mississippi, South Carolina, Texas, Tennessee, and West Virginia. Ten of those 11 Southern states already have on the books what are known as “trigger bans” — laws or constitutional provisions outlawing abortion that would take effect automatically if the Supreme Court overturns Roe.

Only three states in the South — Florida, North Carolina, and Virginia — do not currently have such abortion bans on the books. Facing South spoke with reproductive rights advocates in those states about how they’re preparing in advance of the Supreme Court’s ruling, expected in June.

Drumbeat of Resistance in Florida

In Florida, people can now seek an abortion up to 24 weeks into a pregnancy. However, they must attend state-directed counseling designed to discourage it and have an ultrasound performed beforehand with the option to view the image, and the parents of minor patients must be notified in advance. But its abortion laws are much less draconian than in neighboring Alabama, for example, which — in addition to having a trigger law on the books — imposes a 48-hour waiting period for people seeking an abortion, bans abortions 22 weeks after the last menstrual period, and requires parental consent for minor patients.

“[Given] the restrictions that exist in our neighboring states, we have been seeing patients coming here for care for quite a while,” said Amy Weintraub, the reproductive rights program director for Progress Florida, an organizing nonprofit based in St. Petersburg. “When you compare Florida to other states we also have a much larger number of providers.”

A recent attempt to effectively ban abortion in Florida failed. In September, state Rep. Webster Barnaby, a Republican who represents part of Volusia County, introduced HB 167, a copycat version of the controversial Texas law that enforces a ban on abortion after six weeks of pregnancy by allowing anyone to bring a civil lawsuit against anyone who assists in the abortion — from a doctor to an Uber driver — and collect a $10,000 penalty from them. Unlike the Texas law, though, the Florida bill added exceptions for rape, incest, or a life-threatening medical emergency. But state House leaders grew skeptical of the financial payout component, as the Florida Phoenix reported, and the bill did not advance.

Historically, the Florida Supreme Court has safeguarded the right to an abortion. In 1989, for example, it ruled that a pregnant minor’s right to privacy outweighed protecting an embryo or fetus, and it reaffirmed that decision in 2003, as Slate reported. But since taking office in 2019, Gov. Ron DeSantis (R) has appointed five conservatives to the court, which has gone on to issue 14 decisions that directly or indirectly overturned precedents on various issues, according to Slate’s analysis.

Weintraub expects a 15-week abortion ban bill will be introduced during the 2022 legislative session, which begins in January. In anticipation of that, her group and Floridians for Reproductive Freedom, a coalition made up of over 70 advocacy groups, have planned a Jan. 12 march at the state capitol in Tallahassee to support abortion rights. Organizers are providing bus transportation and meals to make the demonstration accessible to more Floridians.

“We need to keep that drumbeat of resistance against abortion bans going throughout the legislative session,” Weintraub said.

Reproductive rights advocates in North Carolina faced a major policy victory and a setback this year. In June, a federal appeals court ruled that a law banning abortion after 20 weeks, which has been on the books since 1973, remains unenforceable. But then last month, Gov. Roy Cooper (D) signed the into law the state budget passed by the Republican-controlled legislature, which included funding for crisis pregnancy centers — nonprofit organizations that discourage people from getting abortions.

“There’s a lot of money allocated for these pregnancy crisis centers, which may not seem on the face directly related to abortion care. But it really is, because these are fake clinics that are getting state funding, and their goal is to lead people away from abortion clinics,” said Justine Orlovsky-Schnitzler, director of engagement at the Carolina Abortion Fund, a nonprofit that helps people pay for and access abortion services in the Carolinas. She pointed out that crisis pregnancy centers are often not staffed by medical professionals and exist to “run down the clock” for pregnant people seeking abortions.

The Carolina Abortion Fund reports that, since Texas passed its draconian abortion ban, it has helped two people who needed funds to travel from that state to North Carolina for abortions.

Orlovsky-Schnitzler said her organization is undeterred by what’s happening at the Supreme Court. “People need procedures every single day and will continue to need procedures, regardless of what happens with the court system,” she said.

She noted that the biggest challenge the abortion fund faces is raising awareness of their services to help low-income people who cannot afford the full cost of abortions, followed by funding, which primarily comes from individual donations. The organization is particularly focused on reaching rural Carolinians in need of abortion care, given that most clinics are clustered in urban areas.

Virginia currently has the South’s most liberal abortion laws. Last year the Democratic-controlled legislature passed the Reproductive Health Protection Act (RHPA), which ended a 24-hour waiting period for abortion along with mandatory ultrasounds, biased counseling, and requirements that clinics have standards similar to hospitals and that only physicians can perform abortions.

“RHPA did do a lot to lift those barriers for people across the board, but especially for some of the most marginalized people in the commonwealth,” said Tarina Keene, executive director of NARAL Pro-Choice Virginia.

Abortion rights advocates are now pressing state lawmakers to pass the Reproductive Health Equity Act, which which would establish comprehensive insurance coverage for reproductive health services including family planning, abortion care, prenatal and postpartum care, and routine cancer screenings for all Virginians, regardless of income, immigration status, gender identity, or type of insurance. RHEA would overwhelmingly help low-income people of color, said Carlota Arias, interim manager of the Virginia office of the Latina Institute for Reproductive Justice, a national organization headquartered in New York that also has offices in Florida, Texas, and Washington, D.C.

“I think every Virginian should have the full range of access to reproductive care regardless of their income, background or immigration or migration status,” said Arias.

But the recent elections in Virginia dramatically changed the state’s political landscape, with the election of anti-abortion Republican Glenn Youngkin as governor and the GOP’s capture of the state House. Only the state Senate remains under Democratic control. However, exit polls conducted last month showed that most Virginians support legal abortion in most or all cases.