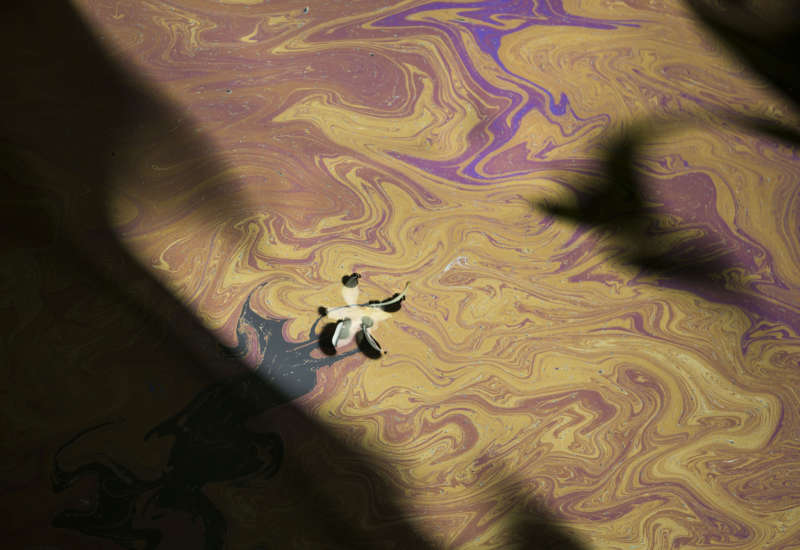 Barely one week before top military brass, veterans and Hawaii government officials were to mark the 80th anniversary of the bombing of Pearl Harbor, families living in military housing around Joint Base Pearl Harbor-Hickam on Oahu noticed something was wrong with their tap water. They smelled gasoline and saw a sheen on the surface.

Complaints and questions were soon followed by sickness. Infants developed bright red rashes, people and pets vomited, and children and adults were rushed to emergency rooms with sores in their mouths, headaches, stomach cramps, nausea and bloody stool.

Initially, U.S. Navy officials dismissed concerns and said they had been drinking the water themselves without problem. On November 29, the base commander said in a statement, “[T]here are no immediate indications that the water is not safe.” But three days later, Navy officials reported that tests found that Navy drinking water lines had been contaminated with volatile hydrocarbons like those present in JP-5 jet fuel used for aircraft carriers.

Each tank holds 12.5 million gallons of fuel which is used for the endless stream of naval vessels and military aircraft that operate from Joint Base Pearl Harbor-Hickam and nearby military installations at the heart of the U.S. military presence in the Pacific.

The Red Hill facility has a history of spills and leaks, dating back as far as 1948. Since its construction, the nearly 80-year-old tanks have leaked more than 180,000 gallons of fuel, according to Sierra Club of Hawaii estimates.

Built vertically in porous volcanic rock, the tanks sit roughly 100 feet above a key aquifer that provides water to more than 90,000 military service members and their families, as well as the greater Honolulu metropolitan area, home to some 400,000 people.

Infants developed bright red rashes, people and pets vomited, and children and adults were rushed to emergency rooms with sores in their mouths, headaches, stomach cramps, nausea and bloody stool.

Speaking at a town hall meeting on December 2, Rear Admiral Blake Converse, deputy commander of the U.S. Pacific Fleet, said a test found petroleum products just above the waterline in a Red Hill well. Wells in other parts of central Oahu, Converse said, did not show signs of contamination. He said that the problem would be resolved with “significant additional flushing … with a good water source.”

However, that same day, Hawaii Congressman Kaialii (Kai) Kahele called the situation a “crisis of astronomical proportions.” Kahele, an Iraq and Afghanistan war combat veteran and Hawaii Air National Guard pilot, described visiting the home of one impacted Navy family who took their daughter to the emergency room for a headache and throat irritation where she was diagnosed with “chemical burns in her mouth.”

Holding up a plastic bottle filled at the family’s home, Kahele said, “If you smell this water, you would know that there is something wrong with this water.”

According to a Honolulu Star-Advertiser report, petroleum contamination in the Navy’s water supply was present as early as last July.

The current crisis follows a November 20 leak due to operator error in which 14,000 gallons of fuel spilled from a drain line near the Red Hill facility, but contamination concerns and accidents go back decades.

Wayne Chung Tanaka, executive director of the Sierra Club of Hawaii, told Truthout that his organization has been monitoring Red Hill for years. A 27,000-gallon leak in 2014 should have caused alarm, but Tanaka said Hawaii’s political leaders have continued to defer to the Navy for years.

“Concerns have been raised for decades. I think the 2014 was just another wake-up call,” Tanaka said. “For many people, it’s a worry that this is a harbinger for the future for a much broader segment of the population.”

Since its construction, the nearly 80-year-old tanks have leaked more than 180,000 gallons of fuel.

In 2017, the Sierra Club of Hawaii successfully sued Hawaii’s Department of Health to ensure underground storage tank regulations were applied to Red Hill. An additional lawsuit was filed in 2019 to stop permit applications from being automatically approved. Additional litigation is ongoing in relation to the Navy’s permit application itself, which may not be extended after whistleblower allegations of failure to disclose an active leak into Pearl Harbor.

According to Tanaka, eight of the fuel-filled tanks haven’t been inspected in between 20 and 60 years. The construction and location of the tanks makes direct manual inspection difficult or impossible. Tanaka pointed out one tank damage analysis with a 40 percent error rate.

Calling the Red Hill storage tanks “museum pieces” that have outlived their usefulness, Tanaka said the Navy should close the facility permanently and store fuel in a more secure location. “Just get [the fuel] away from the aquifer immediately before something even worse happens.”

“This last week’s events have illustrated [that if] the local Navy leadership simply cannot guarantee the safety [and] protection of their own service members and their families, we cannot trust them with the safety of our groundwater and drinking water supply,” Tanaka said.

In Hawaii, Water Is Wealth

Kawenaulaokala Kapahua, a Native Hawaiian land activist with the group Hawaii Peace and Justice, noted that Red Hill facility was built on land taken by executive action during World War II. He pointed out that while “Hawaiians have lived on these islands for thousands of years and existed without polluting our natural resources, the military has been here for less than 150 years and already our water is seeing the detrimental effects of their presence.”

Kapahua notes that the word for “wealth” in Hawaiian is the repetition of the Hawaiian word for water twice (waiwai). “In Hawaiian culture, wealth is not an idea of dollar signs and stocks. Having a lot of water means you are wealthy — it means you are resource-rich … it means that the land is healthy.”

Kapahua told Truthout that he sees Red Hill as part of a larger pattern of U.S. military environmental destruction throughout the Pacific, from Okinawa and Japan to Guam, the Marshall Islands and across the Hawaiian Islands. He points to the Hawaiian island of Kahoolawe, which the U.S. military bombed so hard it cracked the water table and where unexploded ordnance remain in Oahu’s Makua and Waikane Valleys.

“The military has a long history of land mismanagement in Hawaii — pollution and the mismanagement of public resources that end up damaging and threatening the health of the public, so this is no surprise,” Kapahua said. He wants the military to take money from what he called its “massively over-inflated budget” to pay reparations and help restore water purity and cleanliness while also vacating the Red Hill facility permanently and paying for environmental remediation, health impacts and repairs associated with Red Hill.

Trust Has Been Broken

While some military service members and their families have been reluctant to criticize, many are speaking out. One of those is Mai Hall, the wife of an active-duty Air Force enlisted airman who lives in privatized off-base Navy housing. On November 28, Hall noticed her tap water smelled strange — “like a gasoline station when you pump gas.” Her neighbors also reported their water smelled like fuel.

That evening, Hall and other residents received an email from the housing management company which read, “The Navy is investigating reports of a chemical smell in drinking water at several homes in some military housing areas.… There is no immediate indication that the water is not safe.”

Eight of the fuel-filled tanks haven’t been inspected in between 20 and 60 years.

By November 30, Hall received a third email which said, “Navy and Department of Health test results on water samples from various locations on Joint Base Pearl Harbor-Hickam, including military housing, have not detected petroleum constituents in initial testing.” But by then Hall, her husband and their 9-year-old son, along with thousands of others had cooked, bathed and consumed contaminated water.

Hall told Truthout that soon after they noticed the gasoline smell, she, her husband and their 9-year-old son began to suffer headaches, nausea, diarrhea and stomach pain. Some of her neighbors, she said, had it far worse, describing an infant covered in a painful-looking bright red rash. Others developed blisters in their mouth caused by chemical burns, vomiting and headaches.

“Why did [the Navy] wait so long to tell us not to drink [the water]? The Department of Health told us not to drink it before the Navy did,” Hall said. She feels that trust has been broken. “We don’t know who to believe.”

Hall wants the Navy to apologize for what she called “mistreatment and miscommunication of this whole ordeal,” and she wants the Red Hill facility shut down permanently. Her message to the military is: “Make it right. Take care of your people.”

Unlike the U.S. Army, Navy and Marines, which were taking care of the impacted families of those enlisted with direct reimbursement checks, Hall, a Native Hawaiian, said she was told to apply for a grant through the Air Force to cover costs incurred due to the disruption of running water (dining out, paper goods, laundry). “It’s not equitable access to resources compared to other branches.”

Unlike some Hawaiians who want the military completely removed from Hawaii, Hall said she believes there is a place for the military in Hawaii. “We can’t totally be independent from the military because they do provide some support for us… I know that. I’ve learned to live with it,” she said. But she hastened to add: “The military has to realize, this is not their land. They’re on stolen land … so you have to respect it, clean up after yourselves, and make reparations, or at least pay your fair share to sustain the environment in which you live. That has never happened.”

Drinking From the Same Glass

This week, Hawaii’s Gov. David Ige and the state’s four-person congressional delegation called for an immediate suspension of operations and the removal of fuel from the tanks at Red Hill, but stopped short of demanding permanent closure.

The Navy has said it will contest the order.

Prior to that announcement, on December 3, the Honolulu Board of Water Supply announced that as a precaution, it shut down the Halawa shaft, which represents approximately 20 percent of the water supply for urban Honolulu, including downtown, and Hawaii’s primary tourism district, Waikiki.

Honolulu Board of Water Supply’s chief engineer, Ernie Lau, explained that the military and the city draw from the same aquifer. “We basically take water from the same glass of water,” Lau said.

With the Navy’s water source confirmed to be contaminated with petroleum, Lau said, “What we don’t want to do is keep on pumping from our side of that glass and suck the fuel across the valley through the underground aquifer which exists in the porous lava rock into our wells and send it to our homes, to our customers. We do not want to do that.”

Investigation Into Unusual Spike in Newborn Baby Deaths in Scotland