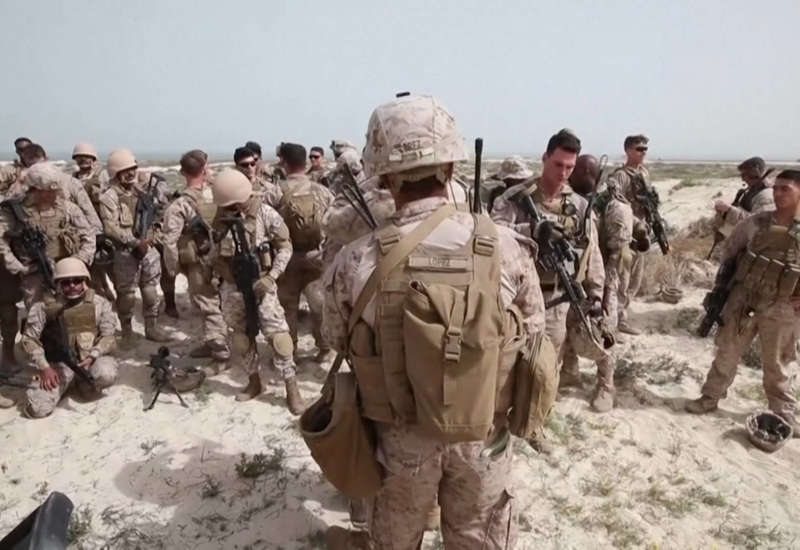 President Biden may soon approve the largest military spending bill since World War II, which ramps up spending to counter China and Russia. Separately, the Senate voted down a bipartisan bid by Senators Bernie Sanders, Rand Paul and Mike Lee to halt $650 million in U.S. arms sales to Saudi Arabia amid the devastating ongoing war in Yemen. “The last thing we need to do is be throwing more money at the Pentagon,” says William Hartung, director of the Arms and Security Project at the Center for International Policy. “This whole idea that China and Russia are military threats to the United States has primarily been manufactured to jump up the military budget.”

The bill is headed to the Senate, then to President Biden, after the House approved the bill late Tuesday night with more Republicans than Democrats voting for it. Among those who voted no was progressive New York Congressmember Jamaal Bowman, who tweeted, quote, “It is astounding how quickly Congress moves weapons but we can’t ensure housing, care, and justice for our veterans, nor invest in robust jobs programs for districts like mine.” Bowman also criticized how the compromise bill strips funding that would have established an office for countering extremism in the Pentagon, saying the bill, quote, “must also protect the Black men and women who are disproportionately the target of extremism and a biased military justice system,” unquote.

Also absent from the bill is a provision to require women to register for the draft.

Separately, the Senate voted down a bipartisan bid by Senators Bernie Sanders, Rand Paul and Mike Lee to halt $650 million in U.S. arms sales to Saudi Arabia amidst the devastating ongoing war on Yemen.

For more, we’re joined by Bill Hartung, director of Arms and Security Project at the Center for International Policy, author of a new report, “Arming Repression: U.S. Military Support for Saudi Arabia, from Trump to Biden,” his latest book, Prophets of War: Lockheed Martin and the Making of the Military-Industrial Complex.

Bill Hartung, welcome back to Democracy Now! First of all, if you can just respond to the House passage of the largest weapons spending bill in U.S. history since World War II?

WILLIAM HARTUNG: Well, I think it’s an outrage, if you look at what we really need. You know, in the roundup, you talked about the need to spend on pandemic preparedness. The world is on fire with the impacts of climate change. We’ve got deep problems of racial and economic injustice in this country. We’ve got an insurrection and violence trying to undermine our democracy. So the last thing we need to do is be throwing more money at the Pentagon. And it’s a huge amount. It’s more than we spent in Vietnam, the Korean War, the Reagan buildup of the ’80s, all throughout the Cold War. And as you said, even at the time as Biden has pulled out U.S. troops from Afghanistan, the Pentagon budget keeps going up and up.

NERMEEN SHAIKH: And, Bill Hartung, could respond specifically to the fact that the budget is $24 billion more than what was requested? Is it common to have such a huge difference in terms of the amount requested and the amount granted, $24 billion?

WILLIAM HARTUNG: Well, Congress often adds money for pet projects — Boeing aircraft in Missouri, attack submarines in Connecticut and Virginia — but nothing at this level. You know, $24 billion is the biggest congressional add-on that I can think of in recent memory. So it’s kind of extraordinary, especially, as we said, when the endless wars should be winding down.

NERMEEN SHAIKH: And can you talk about some of the key figures in Congress who have been pushing for an increase?

WILLIAM HARTUNG: Well, you’ve got people like James Inhofe, who’s the Republican lead on the Senate Armed Services Committee, who’s basically said we need to spend 3 to 5% more per year in perpetuity, which would push the budget over a trillion dollars within five to six years. He is always touting a report called the National Defense Strategy Commission report, which was put together primarily by people who were from the arms industry, from think tanks funded by the arms industry. Basically, it was a kind of a special interest collection that were pushing this.

And then you have Mike Rogers from Alabama, who’s the key player on House Armed Services. He’s got Huntsville in his state, and Huntsville is sort of the missile capital of America — Army missiles, missile defense systems. He also gets hundreds of thousands of dollars from the weapons industry for his reelection. So, there’s a strong kind of pork barrel special interest push by the military-industrial complex that help bring about this result.

AMY GOODMAN: The Senate voted down a bipartisan bid by Senators Bernie Sanders, Rand Paul and Mike Lee to halt the $650 million in U.S. arms sales to Saudi Arabia, this amidst the devastating ongoing war on Yemen. I want to play a clip of Senators Paul and Sanders addressing the Senate Tuesday.

SEN. RAND PAUL: The U.S. should end all arms sales to the Saudis until they end their blockade of Yemen. President Biden said he would change the Trump policy of supporting Saudi’s war in Yemen, but it’s not all that apparent that policy has changed. … We commission these weapons, and we should not give them to countries who are starving children and are committing, essentially, genocide in Yemen.

SEN. BERNIE SANDERS: President, I find myself in the somewhat uncomfortable and unusual position of agreeing with Senator Paul.

AMY GOODMAN: So, that was Senator Sanders and Paul. Bill Hartung, you’re the author of the new report headlined “Arming Repression: U.S. Military Support for Saudi Arabia, from Trump to Biden.” Can you talk about the significance of this, what was voted down?

WILLIAM HARTUNG: Well, these missiles are air-to-air missiles, which can be used to enforce the air blockade that’s been put over Yemen. So, the Saudis have bombed the Sana’a airport runways. They’ve tried to keep ships from coming in with fuel. And as a result, costs of medical supplies now are out of the reach of the average person of Yemen. People haven’t been able to leave the country for medical treatment. Norwegian Refugee Council and CARE say 32,000 people have probably died just for lack of being able to leave the country for that specialized care. Four hundred thousand children are at risk, according to the World Food Programme, of starvation because of the blockade. Millions of Yemenis need humanitarian aid just to survive, and the Saudi blockade is making it increasingly difficult to get that aid or to get commercial goods that they need.

So, basically, this is a criminal enterprise run by Mohammed bin Salman. And Joe Biden said, when he was a candidate, Saudi Arabia, we’d treat it like an pariah; he wouldn’t arm them. In his first foreign policy speech, he said the U.S. should stop support for offensive operations in Yemen. And yet he’s approved a contract for maintenance of Saudi planes and attack helicopters, and now this deal for the missiles. So he’s basically gone back on his pledge to forge a new relationship with Saudi Arabia and to use U.S. leverage to end the blockade and the war itself.

NERMEEN SHAIKH: Bill, before we conclude, just to go back to the military budget, could you comment specifically on the $28 billion earmarked for nuclear weapons?

WILLIAM HARTUNG: Well, unfortunately, this bill doubles down on the Pentagon’s buildup of a new generation of nuclear weapons, a new generation of nuclear warheads, which is, of course, the last thing we need at a time of global tensions. You know, in particular, there was even a provision that said it’s not allowed to reduce the number of intercontinental ballistic missiles, which are the most dangerous weapons in the world because they could easily be used by accident if there were a false alarm of attack, because the president has only minutes to decide whether to use these things. So, I think that’s one of the biggest stains on this bill, is basically continuing to stoke the nuclear arms race, not only at great cost but at great risk to the future of the planet.

AMY GOODMAN: And finally, the China and Russia being used as justification for weapons sales and increased military budget, can you compare the U.S. military budget to theirs?

WILLIAM HARTUNG: Well, the U.S. spends about 10 times what Russia spends, about three times what China spends. It has 13 times as many active nuclear warheads in its stockpile as China does. We’ve got 11 aircraft carriers of a type that China doesn’t have. We’ve got 800 U.S. military bases around the globe, while China has three. So this whole idea that China and Russia are military threats to the United States has primarily been manufactured to jump up the military budget. And so far, unfortunately, at least in the halls of Congress and the Biden administration, that’s been successful.

AMY GOODMAN: Bill Hartung, we want to thank you for being with us, director of the Arms and Security Project at the Center for International Policy. We’ll link to your new report, “Arming Repression: U.S. Military Support for Saudi Arabia, from Trump to Biden.” Hartung’s latest book, Prophets of War: Lockheed Martin and the Making of the Military-Industrial Complex.

Next up, calls are growing for President Biden to extend the moratorium on student debt payments as millions face a debt crisis during the pandemic. We’ll speak with the Debt Collective’s Astra Taylor about her new animated film, Your Debt Is Someone Else’s Asset. Stay with us.