Senate Votes Against Biden Vaccine-or-Test Mandate, Thanks to Manchin and Tester 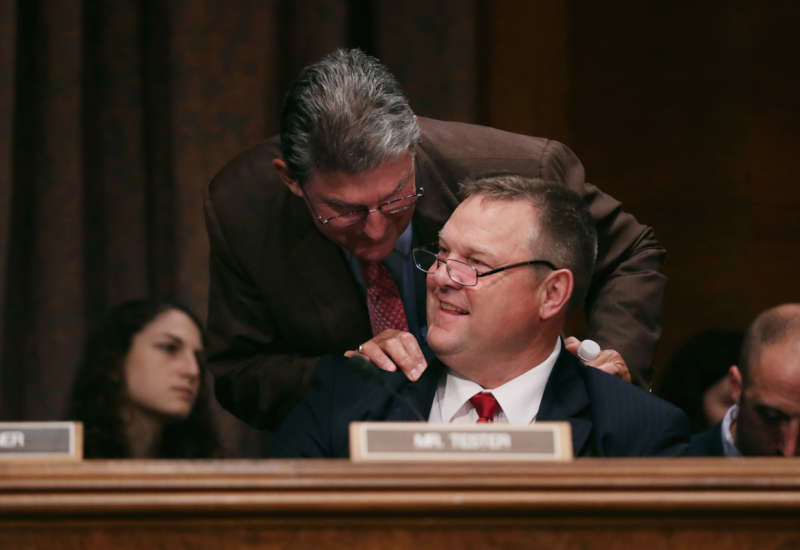 Two right-wing Democrats — Sens. Jon Tester of Montana and Joe Manchin of West Virginia — joined every Senate Republican on Wednesday in voting to repeal the Biden administration’s vaccine-or-test requirement for large businesses, despite warnings that the move could undercut the nation’s pandemic response.

The Senate GOP used a filibuster-proof vehicle known as the Congressional Review Act (CRA) to fast-track a resolution of disapproval against the rule, which was set to take full effect next month but has been held up in the courts by right-wing judges.

The upper chamber passed the CRA resolution by a vote of 52-48, but its chances appear slim in the House — and the White House has said President Joe Biden will veto the repeal measure should it reach his desk.

In a statement, Tester said he supports repealing the Occupational Safety and Health Administration’s vaccine-or-test rule — which applies to businesses with at least 100 employees—because he believes it amounts to a “burdensome” regulation on companies, echoing a Republican talking point. Manchin made a similar argument against the rule.

While the CRA resolution is unlikely to win final approval, public health advocates and Democratic lawmakers warned that the GOP-led effort is “dangerous” because it threatens to further inflame anti-vaccine sentiment that has contributed to persistently low inoculation rates in large swaths of the U.S.

Overall, just under 60% of the vaccine-eligible U.S. population is fully inoculated — a rate that lags behind other rich nations such as Germany, the United Kingdom, and Canada.

“We understand the power of our words in this place,” Chris Murphy (D-Conn.) said in a floor speech ahead of the vote. “Republicans know that when they come down to the floor and attack the vaccine mandate day after day after day, they know they are giving fuel to the fire of the anti-vaccine campaign.”

Sen. Patty Murray (D-Wash.), chair of the Senate Health, Education, Labor, and Pensions (HELP) Committee, said Wednesday that the GOP resolution “would pull the rug out from under our Covid response efforts at a critical moment.”

“It would take away one of the strongest means we have to encourage people to get vaccinated, save lives, end this pandemic, and keep our economic recovery on track,” Murray added.

The Republican-led repeal push came amid the rapid spread of Omicron, a heavily mutated coronavirus variant that has been detected in at least 19 U.S. states and 57 countries across the globe.

At present, the coronavirus is killing more than 1,200 people each day on average in the U.S., which has the highest Covid-19 death toll in the world. Hospitalizations are also currently on the rise around the nation, with six sates — Illinois, Indiana, Michigan, New York, Ohio, and Pennsylvania — accounting for a majority of the increase.

Dr. Matthew Sims, a physician and director of infectious disease research at Beaumont Health in Michigan, told NBC News this week that “almost all” of the Covid-19 patients in the state’s largest hospital system are unvaccinated.

Here’s how bad the chip shortage is, according to the White House