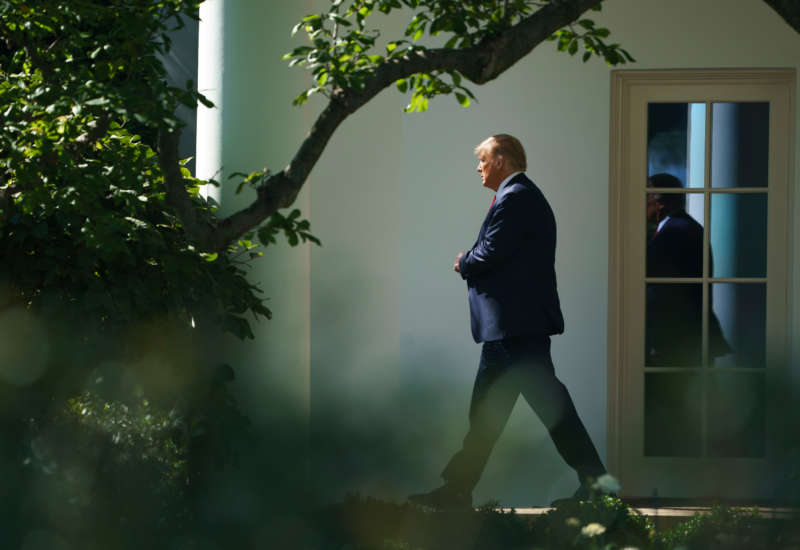 On Thursday, the House passed a bill that will place restrictions on presidential power, aimed at rooting out blatant and continuous corruption like that of former President Donald Trump.

The Protecting Our Democracy Act passed 220 to 208 largely on party lines, with one Republican voting for the bill. Many portions of the bill seem to be inspired by Trump, who often exploited loopholes and apparent impunity for him and his family in order to profit from the presidency while obscuring the lengths of his corruption from the public.

In what seems to be a direct rebuke to Trump, the bill requires presidential candidates to disclose their tax returns. Trump infamously avoided releasing his returns, despite the fact that this was potentially illegal, likely because he often abuses loopholes to pay zero to no income tax. The bill also takes steps to bar presidents from enriching their personal bank accounts while in office.

Trump continuously utilized his presidential power to force political allies and foreign dignitaries to stay at his hotels, which he refused to divest from despite blatant conflicts of interest. The former president profited greatly from his time in office, making an estimated $2.4 billion.

The bill would enhance the Hatch Act, which prohibits government officials from campaigning while serving in office — guidelines that the Trump administration blatantly shirked and will likely face few consequences for. Trump currently faces many civil and criminal cases; the bill would also suspend the statute of limitations for sitting presidents’ federal crimes.

In response to reports that Trump’s team solicited and benefited from foreign interference in the presidential election, the Protecting Our Democracy Act would require political committees to disclose contact with foreign agents to the Federal Bureau of Investigation.

The package has now been sent to the Senate, where it stands little chance of passing due to Republican opposition and the GOP’s continued fealty to Trump. However, supporters of the bill say that it could eventually be broken up, so at least some proposals in the bill could pass into law.

Rep. Adam Schiff (D-California), who introduced the bill, wrote in The Washington Post that similar anti-corruption bills have precedent in Congress. He pointed to laws that Congress passed after President Richard Nixon resigned, which bolstered transparency and ethics laws and empowered inspectors general to seek out and act on corruption.

“These post-Watergate reforms and others did a great deal to preserve the balance of power for much of the past half-century, even if successive presidents wore them down,” Schiff wrote. “Then came the election of Donald Trump. During the course of his four years in office, many of the Nixon-era norms were broken down, exposing new vulnerabilities to our democracy.”

Schiff highlights the time Attorney General William Barr reduced Trump ally Roger Stone’s sentence and had the administration drop charges against Trump adviser Michael Flynn, blurring the line between the politics of the president and the Department of Justice. Schiff’s bill would require the disclosure of interactions between the White House and Justice Department. It would also create safeguards for whistleblowers and inspectors general after Trump fired a number of government watchdogs for personal and political reasons.

“The list of Trump administration presidential abuses is nearly endless,” Schiff wrote. “This is why Congress needs a new set of democracy-affirming reforms. Indeed, because the Trumpian abuses of power are far more sweeping than anything undertaken by Nixon — and ultimately led to a violent attack on our Capitol — the need for stronger guardrails is greater than ever.”

Progressive lawmakers and advocates lauded the bill’s passage. Rep. Ilhan Omar (D-Minnesota) highlighted that the bill “will restore our system of checks and balances, protect our elections, & bolster congressional oversight.”