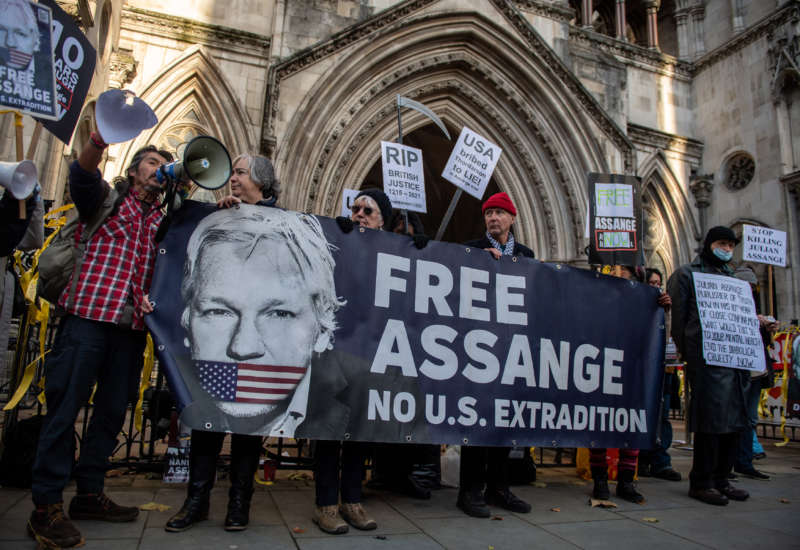 This is a developing news story… Check back for possible updates…

A British court ruled Friday that WikiLeaks founder and publisher Julian Assange can be extradited to the United States to face charges of violating the Espionage Act, a decision that rights groups say poses a profound threat to global press freedoms.

“This is an utterly shameful development that has alarming implications not only for Assange’s mental health, but also for journalism and press freedom around the world,” Rebecca Vincent, director of international campaigns for Reporters Without Borders, said in response to the ruling.

The decision, which Assange’s legal team is expected to appeal, overturns an earlier ruling by Judge Vanessa Baraitser of the Westminster Magistrates’ Court, who argued in January that extradition would endanger the WikiLeaks founder’s life.

“We will appeal this decision at the earliest possible moment,” Stella Moris, Assange’s fiancée, said in a statement. “How can it be fair, how can it be right, how can it be possible, to extradite Julian to the very country which plotted to kill him?”

The Biden administration has thus far ignored pressure from human rights groups to drop the charges, which stem from Assange’s publication of classified information that exposed U.S. war crimes. The Espionage Act charges were filed during the tenure of former President Donald Trump, whose administration reportedly considered assassinating or kidnapping Assange, who has been detained in a high-security London prison since 2019.

“Julian’s life is once more under grave threat, and so is the right of journalists to publish material that governments and corporations find inconvenient,” Kristinn Hrafnsson, editor-in-chief of WikiLeaks, said Friday. “This is about the right of a free press to publish without being threatened by a bullying superpower.”

The British court’s ruling in favor of Assange’s extradition came on the final day of the U.S.-hosted “Summit for Democracy,” an irony that was not lost on critics.

“Biden’s administration cannot reasonably claim to support principles of democracy and human rights while at the same time seeking the extradition of a publisher, Julian Assange, which is opposed by global press freedom organizations,” Shadowproof’s Kevin Gosztola argued in response to the decision.

Christophe Deloire, executive director of Reporters Without Borders, warned that the British court’s ruling could “prove historic for all the wrong reasons.”

“We defend this case because of its dangerous implications for the future of press freedom around the world,” said Deloire. “It is time to put a stop to this more than decade-long persecution once and for all. It is time to free Assange.”