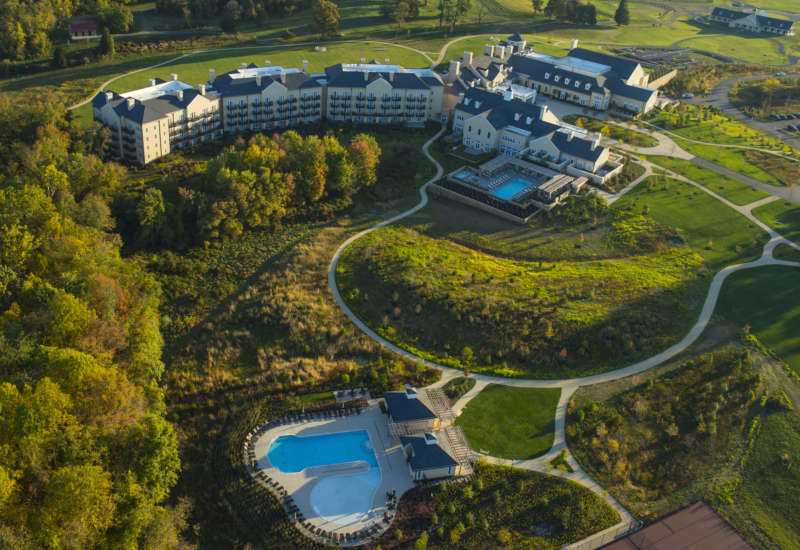 In mid-November, as House Democrats were putting the finishing touches on their most substantial legislative package in at least a decade, the Build Back Better Act, dozens of Democratic House staffers traveled to the luxurious Salamander Resort & Spa in rural Middleburg, Virginia for a weekend policy conference hosted by a corporate lobbying front group.

The event was hosted by Center Forward, a nonprofit organization directed by corporate lobbyists that in recent months has been spending hundreds of thousands of dollars on television and digital ads backing Democrats like Kyrsten Sinema and Joe Manchin who are throwing up roadblocks to parts of the Build Back Better Act, including a popular provision that would allow the government to negotiate lower prices for some prescription drugs.

The organization has received approximately 30 percent of its funding from drug company lobbying group the Pharmaceutical Research and Manufacturers of America (PhRMA) in recent years and has also received funding from telecom lobbying groups NCTA and CTIA and the National Restaurant Association. Center Forward is a c4 nonprofit organization and does not disclose its donors, so only donations listed in other organizations’ tax documents are known. PhRMA gave Center Forward $2.7 million in 2020, as first reported by Daily Poster.

At a breakout session on “balancing competing legislative priorities,” participants divided into three groups to discuss how to “find bipartisan agreement on policies that achieve shared goals and help stabilize the federal budget,” according to a conference program reviewed by Sludge. The three breakout discussions covered “health care and government healthcare programs,” “energy and technology,” and “taxes and budget.” Each session was led by a corporate lobbyist.

The health session was led by Forbes Tate Partners lobbyist Cindy Brown, who so far this year has disclosed lobbying Congress on behalf of at least 20 pharmaceutical companies and industry associations. For at least 12 of her pharma clients, Brown, a Center Forward board member, has disclosed lobbying Congress on issues related to prescription drug pricing. Those clients include PhRMA, Merck, Sanofi, and Eli Lilly.

The issue of drug pricing reform has been at the center of intra-Democratic negotiations around the Build Back Better Act. The original version of the provision, passed by the House in 2019 as H.R.3, would have allowed Medicare to negotiate prices on at least 25 single-source, brand-name drugs that do not have generic competition and are among the most expensive drugs in the country, and the lower prices would have had to been made available to private buyers as well. But in the version that was passed by the House about a week after the Center Forward conference, the plan was whittled down to allow the government to negotiate on no more than 10 drugs beginning in 2025 and the lower prices would only be available to Medicare.

Leading the energy and communications session was Jeff Murray, a lobbyist with 535 Group, FTI Consulting, and the Lugar Group whose clients this year include Facebook, cloud computing company VMWare, Northrop Grumman, and many other companies. For Facebook, Murray lobbies Congress on “Issues and discussion related to online advertising, content and platform transparency efforts.”

The taxes and budget session was led by Forbes Tate Partners lobbyist Elizabeth Greer, who has worked to promote the policy objectives of 77 lobbying clients this year. Greer, also a board member of Center Forward, has been representing many of those companies in talks before Congress on tax issues. For example, for Altria she has lobbied Congress this year on “Issues related to tobacco tax” and on behalf of Walgreens she has been discussing “Issues related to global intangible low taxed income (GILTI),” a corporate taxation issue that has been part of Build Back Better Act negotiations.

After their break-out sessions with the lobbyists, the staffers and members of Congress observed a panel discussion on “Rethinking Global Trade and Supply Chains to Sustain Economic Growth.”

One of the panelists was Business Roundtable lobbyist Paul Delaney, whose job title at the association of Big Business executives is vice president of trade and international policy. According to lobbying disclosures filed with the Senate, DeLaney has been lobbying Congress this year on “issues related to the Build Back Better Act” and other matters involving trade policy and taxes. The Business Roundtable, which represents the CEOs of hundreds of companies including Pfizer, BP, Lockheed Martin, and Nike, has been engaged in what it describes as “a significant multifaceted campaign” to kill the revenue provisions of the Build Back Better Act that are crucial to its passage. The group spent nearly $12 million on lobbying in the third quarter, far above its usual quarterly lobbying expenditures.

The other panelist named in the program was Geoff Freeman, president and CEO of the Consumer Brands Association, a lobbying group formerly known as the Grocery Manufacturers Association that spends more than $1 million each year on lobbying the government.

It wasn’t just lobbyists that the conference attendees heard from. Also speaking at the event were two NBC journalists, Senior National Politics Reporter Jon Allen and Senior Washington Correspondent Hallie Jackson. According to a spokesperson for NBC, Allen and Jackson were not compensated for the appearances at the conference.

Center Forward has an affiliate super PAC that spends millions on ads each election cycle to promote the re-election of conservative House Democrats like Rep. Stephanie Murphy (D-Fla.) and Rep. Kurt Schrader (D-Ore.).

Middleburg, where the conference was held, is known as the “’Nation’s Horse and Hunt Capital’ for its foxhunting, steeplechases, and large estates,” according to Wikipedia. The Salamander Resort is an equestrian-inspired luxury destination located on 340 rolling acres and featuring a 14,000 square-foot stable. Its dinner menu includes a $85 wagyu ribeye.