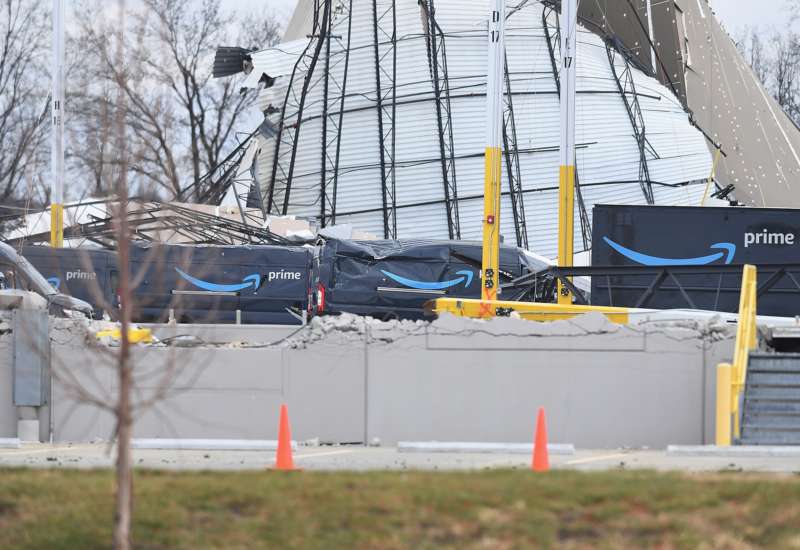 A previous worker policy from Amazon, which disallowed employees from having smartphones on them while at work, is drawing renewed national attention after a tornado in Edwardsville, Illinois, caused one of the company’s warehouses to collapse, killing six workers.

The no-phone policy was reduced during the pandemic, but has gradually been reintroduced at a number of facilities throughout the United States, according to a report from Bloomberg. However, Amazon has denied that the company has reimplemented the policy at all.

A tornado ripped the roof off of the Edwardsville warehouse on Friday evening, collapsing its 11-inch concrete walls and killing six Amazon employees. That same day, over 20 tornadoes tore through Illinois, Arkansas, Kentucky, Mississippi, Missouri and Tennessee, killing dozens of people.

The National Weather Service’s Storm Prediction Center warned of a “damaging wind and tornado threat” shortly before the storm reached the facility. But it’s unclear whether workers at the Amazon facility in Edwardsville ever received that warning, because of the company’s previous policy that banned cell phones on worksites. Even if that policy wasn’t in place in the Edwardsville warehouse or elsewhere, it’s not certain that workers were encouraged to keep their phones by their sides, either, particularly during weather emergencies.

Amazon representatives told Gizmodo that Edwardsville workers were sent “various alerts” about the tornado that hit the facility on Friday. In a statement shared with Truthout, the company also said that “employees and drivers are allowed to have their cell phones” with them.

“We’re deeply saddened by the news that members of our Amazon family passed away as a result of the storm in Edwardsville, IL. Our thoughts and prayers are with the victims, their loved ones, and everyone impacted by the tornado,” read a statement from Amazon spokesperson Kelly Nantel. “We also want to thank all the first responders for their ongoing efforts on scene. We’re continuing to provide support to our employees and partners in the area.”

But that hasn’t alleviated safety concerns for thousands of workers across the U.S, several of whom publicly condemned the previous policy and warned against it being reimplemented.

At least six Amazon employees spoke to Bloomberg about the phone ban, including some who worked directly across the street from the facility that collapsed on Friday. If the policy makes a full return, they said, workers won’t be able to receive alerts about impending storms and natural disasters — which could potentially lead to more deaths in the workplace.

“After these deaths, there is no way in hell I am relying on Amazon to keep me safe,” one Illinois-based worker said. “If they institute the no cell phone policy, I am resigning.”

A worker in Indiana told Bloomberg that she plans on using sick days to avoid being at her worksite during inclimate weather.

“I don’t trust them with my safety to be quite frank,” she said. “If there’s severe weather on the way, I think I should be able to make my own decision about safety.”

A third worker was sure that Amazon was ready to reimplement the policy throughout the company. “They’ll ban phones again. They don’t give a shit about the workers,” the worker predicted.

Many social media users said that Amazon was responsible for the deaths at its Edwardsville warehouse, whether the policy was in place or not.

“Amazon is responsible for these deaths — their unbridled drive to extract the most value from their warehouse workers meant leaving them vulnerable to disaster,” wrote Honda Wang, a representative for the New York City Democratic Socialists of America.

“How many workers must die for Amazon to have a policy for extreme weather events?” sociologist Nantina Vgontzas asked, noting that the company has a history of keeping its workers in place during severe weather events.

Some commentators noted historical parallels between Amazon’s no-phone policy and other workplace disasters, including the New York Triangle Shirtwaist Factory fire, which killed 146 workers in 1911.

“The Triangle Shirtwaist Fire was so deadly because management locked the doors to ‘prevent theft’ and keep out union organizers,” said CNN editor Michael Ballaban, sharing a link that referenced the Amazon warehouse deaths.