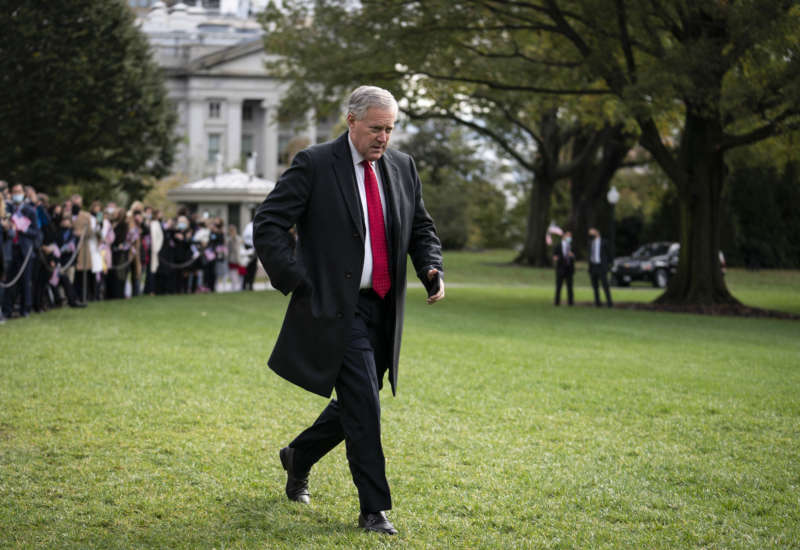 More than a year into Donald Trump’s increasingly disturbing post-defeat effort to topple the republic in the name of personal vengeance, it is easy to forget what an unmitigated clown show his administration was. Even amid the deliberately inflicted fascist chaos, there were plenty of moments when the White House couldn’t manage the recipe for buttered bread. Mark Meadows is a shining example of that lot.

“The House on Tuesday voted to hold former White House chief of staff Mark Meadows in criminal contempt of Congress,” reports The Washington Post, “for defying a subpoena issued by the bipartisan committee investigating the deadly Jan. 6 attack on the U.S. Capitol by a pro-Trump mob…. Members of the Jan. 6 panel have long said the information they seek from Meadows, a onetime North Carolina congressman, is not protected under any kind of executive privilege as the bipartisan panel investigates the insurrection, what former president Donald Trump did that fateful day and the actions leading up to the riot.”

A quick refresher for those who may not be fully up on their Meadows lore: The former South Carolina House member rode into office on the Tea Party tidal wave of 2012. He is a founding member of the now-notorious Freedom Caucus, which exists only to denude and destroy the government that caters to it. Meadows is famous for voting against aid for those affected by Hurricane Sandy, helping to bounce John Boehner from the Speaker’s chair for being too liberal, shutting down the government to prevent people with pre-existing medical conditions from getting insurance coverage under the Affordable Care Act, voting against renewing the Violence Against Women Act because that’s what “God’s country” wanted him to do, and opposing any form of restrictions on gun purchases.

After becoming chief of staff in 2019, Meadows was almost religiously devoted to whatever deep-fried nonsense fell from Trump’s mouth on any given day. Full in the knowledge that he was the fourth to occupy this office in three years, and that his predecessors had been chopped down and publicly humiliated by the boss before their abrupt departure, Meadows did his obsequious best to walk the line. He lasted 295 days, to the final day of the administration.

During Meadows’s tenure, the top two issues on Trump’s mind were the fictional stolen election and his insistence on downplaying the menace presented by COVID-19. Meadows has much to answer for due to his actions on the latter: He actively dismissed the effectiveness of masks, and counseled Trump do the same lest he infuriate the GOP base. Meadows was also notoriously hostile to the scientists advising the administration on the pandemic, often attacking or undermining Anthony Fauci for saying anything that might do political harm to the administration.

It was Meadows’s open devotion to Trump’s “We Wuz Robbed!” election theft quest that has drawn the attention of the select committee. After initially agreeing to cooperate, and after handing over a large tranche of documents, Meadows abruptly reversed course and revoked his cooperation.

The text messages to and from the entire right-wing mesosphere on that day paint a vivid picture of just how broad and deep the insurrection was.

Within the documents he released, however, were transcripts of text message exchanges he had on January 6 with Republican lawmakers who were trapped in the building, and Fox News personalities who feared the riot would negatively affect Trump’s public standing.

The discovery of these documents led to one of the more dramatic evenings in the near history of the Capitol dome. “As the Jan. 6 committee voted to hold Meadows in contempt Monday night,” reports the Post, “one of its two Republicans, Rep. Liz Cheney, read aloud some texts that Meadows had received and sent on Jan. 6. They include Fox News personalities arguing to Meadows that the scenes were hurting what they clearly viewed as a common cause and that Trump wasn’t doing enough to stop them. They also, remarkably, included the president’s son, Donald Trump Jr., rebuking his own father for insufficient steps to quell the violence.”

Recently, Meadows came out with a book intended to shine a positive light on the Trump White House. Because he included the revelation that Trump had tested positive before his first debate with Joe Biden, Trump erupted and called the book “fake news.” To mollify him, Meadows actually appeared before the press and agreed: The book is indeed fake news.

It has been noted that many of the most titillating bits in the document dump Meadows provided to the committee didn’t make it into the book. Those bits got an airing last night, thanks to Liz Cheney. “What little we know of those private communications is plenty damning enough,” reports The Daily Beast. “On Monday night, as the committee voted to hold Meadows in criminal contempt, Rep. Liz Cheney read aloud text messages to Meadows from Fox News hosts Laura Ingraham, Brian Kilmeade, Sean Hannity, and even Trump’s own son Don Jr., in which they all begged to have the president intervene. He did not.”

Meadows likely knows a hell of a lot more than he’s saying about what really went down on 1/6, and who was behind it. He has been indicted for his failure to cooperate, and faces a steep climb in the courts trying to hide behind Trump’s laughable argument for immunity. Even absent his testimony, the copies of his text messages to and from the entire right-wing mesosphere on that day paint a vivid picture of just how broad and deep the attempted coup was.

There’s a sniff of Watergate here, if only in the way the players involved chose to record and document their activities and interactions without a care for who might see them someday. Another Trump staffer bollixed the buttered bread. Nothing has changed.