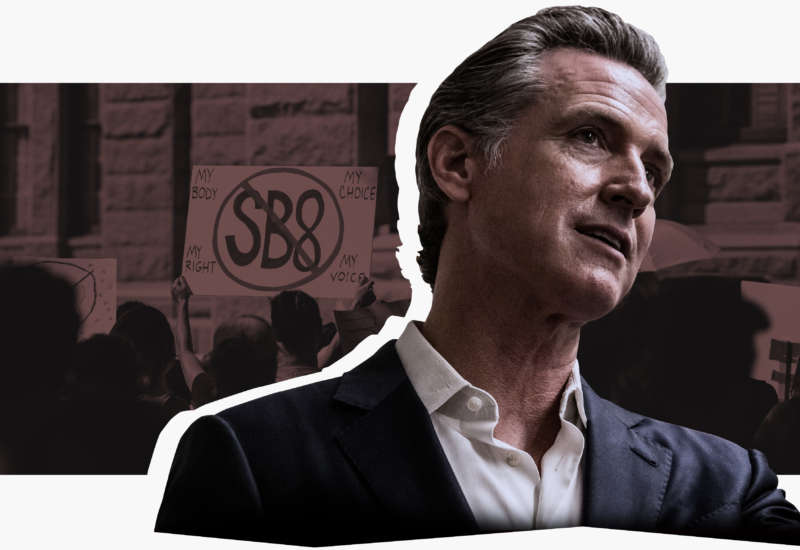 California Gov. Gavin Newsom is going to war against gun manufacturers. Three months out from the recall campaign that he handily defeated, an emboldened Newsom is looking for creative ways to rein in an industry that dumps tens of millions of high-powered weapons onto the civilian population each year and then walks away from the body count left in its wake. Specifically, last week the governor asked state politicians to present him with legislation that he could sign deputizing private citizens to sue gun and ghost gun manufacturers (producers of untraceable guns that are built from kits rather than purchased fully assembled with serial numbers), as well as gun distributors, in the event their weapons are used in the commission of a crime.

California already has some of the country’s toughest laws limiting the sale and ownership of war-grade weapons such as the AR-15 rifle, as well as recent legislation limiting the number of rounds of ammunition that a magazine can hold to 10 or below; but that legislation is extremely vulnerable to judicial opposition, especially given the conservative tilt of courts impacted by Trump appointees. This year, a lower court found that the state’s ban on assault weapons was unconstitutional, although the ruling was put on hold and was then subsequently blocked by Ninth Circuit judges. It is almost certainly a case that will wend its way up to the pro-Second Amendment U.S. Supreme Court, with its three Trump-nominated justices. The state also has tough background check laws for the purchase of weapons, although courts have ruled aspects of those laws, in particular background checks before people can purchase ammunition, to be unconstitutional as well.

Now, in an explicit nod to the opportunities opened up by the Supreme Court’s hands-off approach to Texas’s Senate Bill 8 (S.B. 8) — encouraging private citizens from around the country to sue anyone who aids or abets a person more than six weeks into their pregnancy seeking an abortion — Governor Newsom is taking a similar provocative tack to confront weapons manufacturers. He has urged the Democratic supermajority in California’s legislature to pass legislation empowering private citizens to sue for at least $10,000 anyone “who manufactures, distributes, or sells an assault weapon or ghost gun kit or parts in the State of California.”

S.B. 8, which Texas Gov. Greg Abbott signed into law more than three months ago, is unprecedented. It seeks to do an end run around constitutional protections guaranteeing a pregnant person the right to an abortion until such time as the fetus becomes viable outside the womb — currently set by court decision at 23 weeks — and replacing that cutoff with a six-week time limit instead. So extreme is Texas’s legislation that it doesn’t even contain carve-outs to allow abortion in the case of rape or incest.

The spine of this act is in clear contravention of judicial rulings over the past 50 years, at both the lower and higher court levels, and thus it ought to have been a no-brainer that the Supreme Court would strike it down. Yet, as a testament to just how far right and how overtly political that court has become, its justices have refused to do so. In delegating the enforcement strategy to private individuals rather than state officials, the legislators who drafted and passed the bill hoped to neutralize the judicial response. Their rationale was that if state officials aren’t involved in illegally policing abortion — even if their allowing bounty hunters to sue those who aid and abet people securing abortions to all intents and purposes makes them complicit in an unconstitutional action — they couldn’t be sued to stop implementation of the measure. Shockingly, a majority of justices seem to have bought into that nebulous line of reasoning.

Over the coming months, even before the justices potentially use the Mississippi abortion case to gut Roe v. Wade, one GOP-controlled state after another is likely to model anti-abortion legislation after S.B. 8. We may, as a result, rapidly become a nation of legislatively approved bounty hunters — or, I should say, “become again” such a nation, since paid slave-catchers once roamed this land with similar financial incentives codified by state laws.

But, of course, the buck won’t stop with abortion. It’s becoming stunningly clear that the court, in tying itself into legal pretzels in order to find any and every way to slash abortion rights, has actually greenlit a potentially limitless array of bad legal practices, and given a broad incentive to state legislators to pass bounty hunter-type legislation, modeled on S.B. 8, on any pet issue of the day. Gun rights advocates in Texas have seen the writing on the wall on this, joining with pro-choice advocates in opposing S.B. 8, not out of a love of abortion but out of a fear of spin-off legislation in blue states that will target the gun industry.

Such legislation — intended to poke the bear, to be legislative attacks rather than scrupulously worded, constitutionally sound policy — will rapidly corrode the role of the courts and undermine whatever capacity they have left to mediate complex societal problems. Privatized enforcement of the law, with financial incentives for the enforcers will, like the privatized tax collection systems of pre-revolutionary France, ultimately corrode the legitimacy of the state itself. This path risks empowering vigilantes and infringing upon basic human rights.

Governors and legislators know that, at the very least, deputizing private citizens to enforce laws on everything from gun control to pollution emissions will raise constitutional law scholars’ eyebrows. Yet, since Texas seems to have gotten away with it when it comes to abortion, why not push the envelope as far as possible on other issues, too? That’s certainly what a number of constitutional law scholars have been arguing in recent weeks, calling on progressive governors to model gun control and climate change policy on the Texas legislation. And that’s exactly what California Gov. Gavin Newsom is now urging legislators to do.

There is a risk here of endless tit-for-tat legislation between blue and red states, with each go-around broadening the area of law open to bounty-hunter enforcement. That risk, identified by Chief Justice John Roberts in his opposition to the majority rulings on S.B. 8, serves the interests of no one concerned with constitutional integrity.

There is a risk here of endless tit-for-tat legislation between blue and red states, with each go-around broadening the area of law open to bounty-hunter enforcement.

In Texas, abortion remains theoretically legal; it’s just that the consequences for Planned Parenthood and other abortion providers (not to mention medics, social service workers, taxi drivers who drive people to abortion clinics, and anyone else involved in the process) are so potentially ruinous that they have chosen to stop providing abortions. So, too, in California if the law passes and if the Supreme Court doesn’t step in, in theory these weapons will still be legal, but anyone who manufactures, distributes or sells guns could face potentially devastating lawsuits.

Of course, it’s entirely possible, even likely, that the Supreme Court’s super-conservative majority will do yet another pretzel twist and decide that while it can’t stop bounty hunters in the abortion arena, it can and will stop them if their interpretation of the Second Amendment comes under threat. And, as Roberts seems to realize, that would be the worst of all possible judicial worlds. For it would peel back the court’s veneer of legitimacy – its always laughable claim to impartiality — to show that at the end of the day, the conservative Supreme Court justices are far less concerned with consistency than with propping up, at all costs, political projects such as banning abortion and neutralizing any and every effort at gun control.