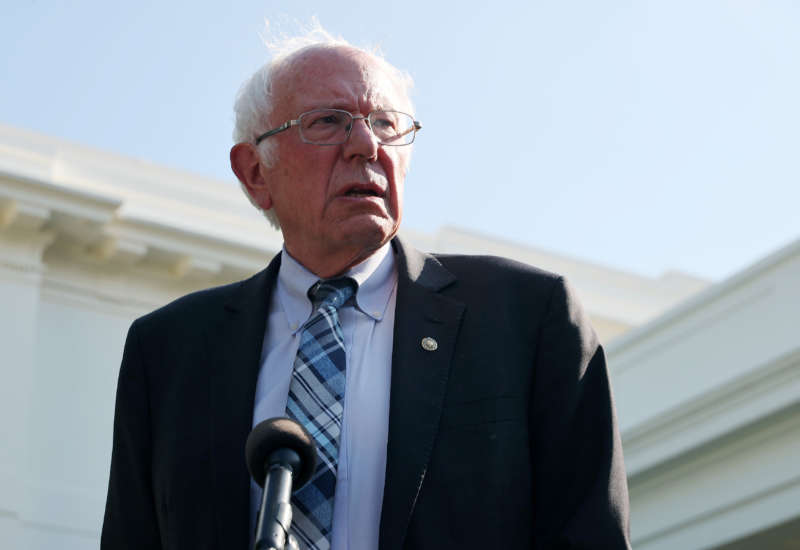 In a press conference on Wednesday, President Joe Biden appeared to snub left-leaning lawmakers in his party, implying that it’s progressives – not conservative Democrats – who are obstructing the president’s agenda.

The implication came after Fox News’s Peter Doocy asked the president why he is trying to “pull the country so far to the left” – a question that itself is disingenuous, as fearmongering politicians and right-wing media have continually painted centrist Democrats as radical in order to mobilize their own followers.

In response, Biden rebuffed the idea that he has been pulling the country to the left. “You guys have been trying to convince me that I am Bernie Sanders,” he said. “I’m not Bernie Sanders. I’m not a socialist. I’m a mainstream Democrat and I have been. And mainstream Democrats have overwhelmingly – if you notice, 48 of the 50 Democrats supported me in the Senate on virtually everything I’ve asked.”

It’s true that Sanders, who identifies as an independent but caucuses with the party, may not fit the mold of a so-called mainstream Democrat by current party standards, even though he has had an enormous hand in shaping the party’s agenda.

But Sanders has consistently rallied behind Biden since the president’s inauguration almost a year ago. In fact, Sanders has been Biden’s most stalwart advocate for priorities like the Build Back Better Act. Meanwhile, the two Senate Democrats who have obstructed nearly the entirety of Biden’s legislative agenda thus far are conservative “blue dog” Democrats.

Indeed, Biden’s comment came just before conservative Democrats Senators Joe Manchin of West Virginia and Kyrsten Sinema of Arizona delivered a fatal blow to one of the most pressing proposals on the Democratic docket on Wednesday night.

After a year of fierce arguments over the filibuster, Senate Majority Leader Chuck Schumer (D-New York) set up a vote on Wednesday to amend Senate rules in order to pass the Democrats’ marquee voting bill, the Freedom to Vote: John R. Lewis Act.

The proposal would have allowed a talking filibuster on the bill to expand voting rights and increase campaign finance transparency, clearing the legislation – which has already been passed by the House – to pass in the Senate with a simple majority vote. Biden has endorsed the filibuster changes so that the party can protect voting rights as Republicans pass dozens of bills restricting voting rights across the country.

However, Sinema and Manchin blocked the filibuster changes and the voting rights legislation. Although political journalists continually claim, with little evidence, that the two actually represent a less-outspoken faction of the party, Manchin and Sinema were the only Democrats who voted against the proposal, joining 50 Republicans in blocking the bill.

After the vote, Sanders condemned the senators for obstructing Biden’s agenda in Congress. “It’s not just this vote” that Manchin and Sinema have blocked, he said, according to Talking Points Memo. “These are people who I think have undermined the president of the United States. They have forced us to go through five months of discussions which have gotten absolutely nowhere.”