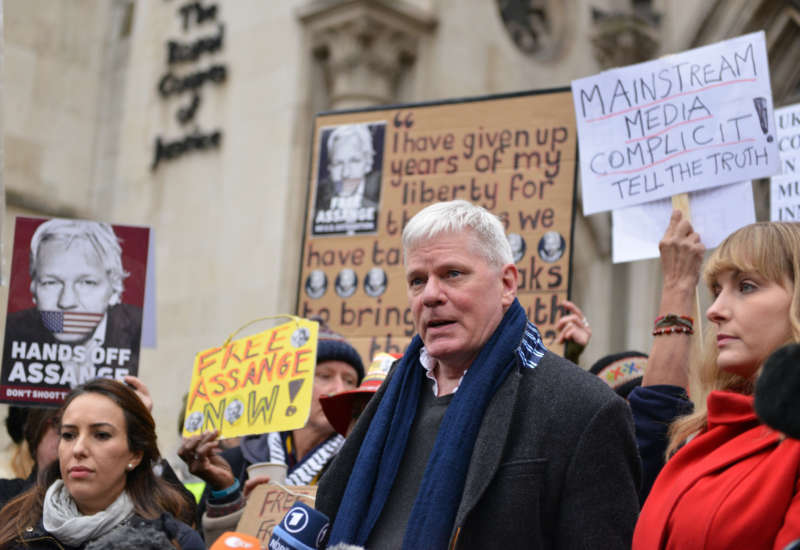 Following a three-week evidentiary hearing, Baraitser concluded that if extradited to the United States for trial, Assange was very likely to commit suicide because of his mental state and the harsh conditions of confinement under which he would be held.

During that hearing, the Biden administration didn’t provide the judge with any assurances that Assange would not be held in near-isolation in U.S. prisons. It was only after Baraitser denied extradition that the U.S. government came forward with “assurances” that Assange wouldn’t be subject to special administrative measures (SAMs) or be held in the ADX supermax prison in Florence, Colorado. But those so-called assurances contained a loophole. They would be null and void if Assange were to commit a “future act” that “met the test” for the imposition of SAMs.

The late timing of the U.S. assurances precluded Assange’s defense from arguing that they were unreliable. Nevertheless, the High Court accepted the Biden administration’s 11th-hour assurances and ruled that Assange could be extradited to the United States.

Assange is facing 175 years in prison for charges under the Espionage Act that stem from WikiLeaks’ 2010 publication of evidence of U.S. war crimes in Iraq, Afghanistan and Guantánamo. The Obama administration considered charging Assange for those revelations but declined to do so for fear of running afoul of the First Amendment’s freedom of the press. Donald Trump did indict Assange, however. But instead of dismissing the case, Joe Biden is vigorously fighting to extradite Assange and pursue the charges that Trump filed.

“The High Court certified that we had raised a point of law of general public importance and that the Supreme Court has good grounds to hear this appeal,” Assange’s fiancée Stella Moris said in a statement outside the courthouse after the High Court’s ruling. “The situation now is that the Supreme Court has to decide whether it will hear the appeal, but make no mistake, we won today in court.”

Assange has been held in London’s maximum security Belmarsh Prison since 2019. While claiming victory from the High Court ruling, Moris cautioned that Assange continues to suffer in harsh confinement. “But let’s not forget that every time we win, as long as this case isn’t dropped, as long as Julian isn’t freed, Julian continues to suffer,” she said. “He is suffering profoundly, day after day, week after week, year after year. Julian has to be freed, and we hope that this will soon end.”

If Assange is extradited, he will probably continue to suffer in confinement. The High Court refused to certify the two other appeal points Assange raised involving inhuman or degrading treatment that may be imposed on him in U.S. prisons, which would violate the European Convention on Human Rights. Prolonged solitary confinement may amount to torture under international law.

Although Amnesty International welcomed the High Court’s decision to certify the issue of the timing of the U.S. assurances, it stated in a press release, “we are concerned the High Court has dodged its responsibility to ensure that matters of public importance are fully examined by the judiciary. The courts must ensure that people are not at risk of torture or other ill-treatment. This was at the heart of the two other issues the High Court has now effectively vetoed.”

More than 26 peace and justice organizations and 2,500 activists signed a statement calling for the immediate release of Assange and praising him for contributing to global peace. One signatory is Alice Walker, co-chair of Assange Defense (on whose advisory board I sit). Walker said,

He fought for justice by exposing how the United States conducted horrific wars of conquest in Iraq and Afghanistan. Millions died in these wars, mostly civilians. Assange believed that knowledge of U.S. war crimes belonged to us, the people, to decide for ourselves what should happen in our name. And now it’s time for us to fight for him.

British Labour Member of Parliament Jeremy Corbyn stated, “Journalism is not a crime,” contrasting Assange’s confinement with the freedom of the war criminals he exposed. “Wikileaks exposed crimes of U.S. empire in Afghanistan, Iraq, and beyond. The perpetrators of these crimes walk free, often still prominent public figures in the U.S., U.K., and elsewhere,” Corbyn added. “They should be held accountable for the lives they destroyed and the futures they stole.”

If the U.K. Supreme Court refuses to consider Assange’s appeal or they consider it and rule against him, Assange could file a cross-appeal in the High Court. He could then request that the High Court review the issues he lost in Baraitser’s court.

Assange would argue to the High Court that his extradition cannot proceed because it is for a political offense; he is being prosecuted for ulterior political motives and not in good faith; and extradition would constitute inhuman and degrading treatment, and he would be denied the rights to a fair trial and freedom of expression, as guaranteed by the European Convention on Human Rights. As a last resort, he could appeal to the European Court of Human Rights.

Meanwhile, Assange will file his appeal in the Supreme Court within 14 days.