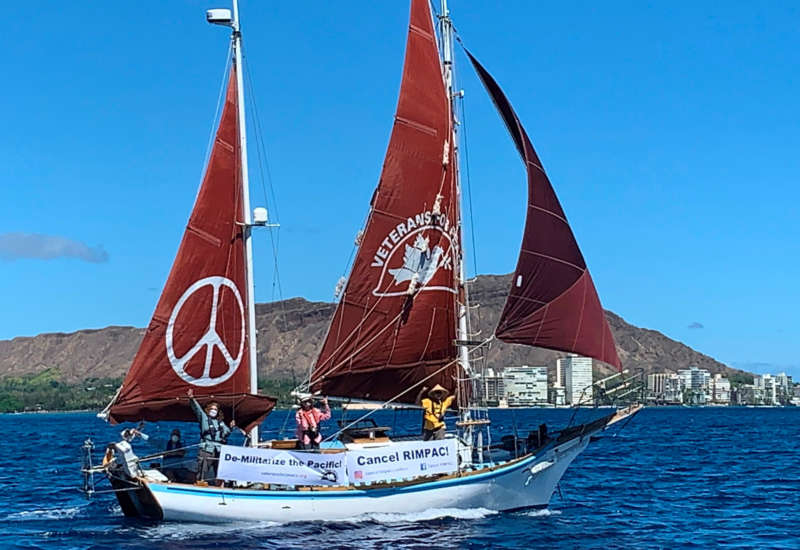 January 22 marked one year since the UN Treaty on the Prohibition of Nuclear Weapons (TPNW), which the U.S. has refused to sign, became a binding treaty. To commemorate that anniversary and in anticipation of the impending release of the Biden administration’s Nuclear Posture Review, Veterans For Peace (VFP), a non-governmental organization that exposes the costs and consequences of militarism and war and seeks peaceful, effective alternatives, issued its own Nuclear Posture Review (NPR).

The Pentagon’s 2018 NPR says the United States can use nuclear weapons in response to non-nuclear attacks, including cyberattacks, in “extreme circumstances to defend the vital interests of the United States, its allies and partners.” This would allow the U.S. to engage in the “first use” of nuclear weapons. Anti-nuclear activists are pushing Joe Biden to reverse Donald Trump’s policies set forth in the 2018 NPR, including the first-use policy. Moreover, first use of nuclear weapons violates international law. It would also spell disaster for the survival of the planet.

VFP’s 10-page NPR replaces the goal of “full spectrum dominance” over the globe with “full spectrum cooperation.” It calls on the U.S. to implement a verifiable No First Use policy, take nuclear missiles off hair-trigger alert and remove the sole authority of the president to launch a nuclear war. VFP urges the United States to begin good faith negotiations with the goal to eliminate all nuclear weapons and take immediate measures to decrease the risk of an accidental nuclear war. It also calls on the U.S. to sign the TPNW.

Eighty-six countries have signed the treaty and 57 have ratified it, which makes them parties to the accord. Once it had 50 parties, the TPMW entered into force on January 22, 2022.

“The danger of a devastating nuclear war is greater than ever,” Gerry Condon, a Vietnam-era veteran and former president of VFP, told Truthout. “We cannot leave the future of the planet in the hands of the generals, the cold warriors and the weapons manufacturers who have brought us one terrible war after another.”

The U.S. Is Violating the Nuclear Non-Proliferation Treaty

Although the United States is a party to the 1970 Nuclear Non-Proliferation Treaty (NPT), it continues to violate the provisions of that treaty. Former Secretary of Defense Robert McNamara said in a 2005 release by the Institute for Public Accuracy, “The U.S. government is not adhering to Article VI of the NPT and we show no signs of planning to adhere to its requirements to move forward with the elimination — not reduction, but elimination — of nuclear weapons.”

VFP calls on the U.S. to implement a verifiable No First Use policy, take nuclear missiles off hair-trigger alert and remove the sole authority of the president to launch a nuclear war.

In the years since, the United States has actually moved in the opposite direction. The Obama administration advanced a policy, which Donald Trump and Joe Biden continued, to develop leaner and meaner nuclear weapons. The proposed U.S. budget calls for nearly $2 trillion over the next 30 years to build two new bomb factories, planes, missiles, submarines and redesigned warheads.

Ken Mayers, a VFP national board member, said in an email to Truthout, “When we considered all the Nuclear Posture Reviews since the first one in 1994, we concluded that they all leaned towards war. We decided that veterans should speak up and push our government to correct that posture by standing up for peace. That is the consistent theme of the VFP Nuclear Posture Review.”

It urges the Biden administration to take the following steps (summarized by me with some additional explanations below):

Implement a No First Use and No Launch on Warning (“Hair Trigger Alert”) policy that entails separating warheads from delivery vehicles;
Decommission Intercontinental Ballistic Missile silos and weapons because they can only be used as a first strike weapon;
Replace the president’s exclusive authority to launch a nuclear attack with a safer, collective process that is less likely to lead to a rash decision to launch nukes;
End Terminal High Altitude Area Defense (a U.S. anti-ballistic missile defense system to shoot down short-, medium-, and intermediate-range ballistic missiles), as well as other anti-ballistic missile systems;
Sign and ratify the TPNW;
Actively initiate and pursue negotiations with an aim toward reducing international tensions and a goal of effecting a major reduction in nuclear arms and promoting strategic stability;
Summon all of the nuclear-armed countries to the table to negotiate a path toward nuclear disarmament, as required by the NPT;
Join with China and Russia to negotiate space-ban and cyber-ban treaties;
Ratify the Comprehensive Test Ban Treaty, which prohibits “any nuclear weapon test explosion or any other nuclear explosion” anywhere around the globe;
Reimplement the Anti-Ballistic Missile Treaty and eliminate all missile “defense” systems;
Reimplement the Intermediate-Range Nuclear Forces Treaty, which required the U.S. and the USSR to eliminate and permanently renounce all nuclear and conventional ground-launched ballistic and cruise missiles that had ranges of 500 to 5,500 kilometers;
Work with U.S. allies to remove U.S. nuclear weapons that are stationed in the following NATO countries: Germany, Italy, Turkey, Belgium and the Netherlands;
Recall to the United States all submarines armed with nuclear weapons, ground the nuclear bombers, and dismantle the missile sites;
End the “nuclear modernization program,” which includes new nuclear weapons research, design, expansion, refurbishment, laboratory testing and sub-critical testing. Pass the Nuclear Weapons Abolition and Economic and Energy Conversion Act (HR 2850), which would redirect the funds to non-carbon, non-nuclear energy systems in order to reduce the impact of climate change and provide benefits to society;
Appropriate adequate funding to clean up nuclear production and testing facilities, uranium mines and mills, and nuclear waste sites in the U.S. and Pacific nuclear test areas. Develop facilities and technologies to handle radioactive materials; and
Create economic conversion plans to assist nuclear industry workers in making a transition to constructive employment.

As the United States continues to violate the NPT, it maintains a provocative posture toward North Korea (which has nuclear weapons) and Iran (which doesn’t).

Veterans For Peace proposes that the Biden administration implement a five-point plan to revive U.S.- DPRK (Democratic People’s Republic of North Korea) talks to end the expensive “forever” U.S. war against the DPRK. The plan includes: an agreement to implement the U.S.-DPRK Joint Statement from the Singapore Summit; negotiation of a peace treaty to replace the outdated 1953 Korean War Armistice Agreement; an end to all joint exercises between the U.S. and South Korea, Japan and other countries against the DPRK; the lifting of all sanctions against the DPRK; and the cessation of all threats against North Korea and removal of the U.S. missile system from South Korea.

Meanwhile, VFP is calling on Biden to concretely shift course in relation to Iran. The Trump administration withdrew the United States from the Iran nuclear deal. But one year into his presidency, Biden still has not rejoined agreement despite his campaign promise to do so. Under the Joint Comprehensive Plan of Action (JCPOA), Iran pledged not to enrich uranium above the level that could be used for a bomb, in return for the lifting of U.S. sanctions. After Trump renounced the JCPOA, he reimposed punishing sanctions on Iran. VFP urges Biden to lift the sanctions and re-enter the JCPOA.

VFP’s Nuclear Posture Review is a critical document, which, if implemented, would go a long way toward protecting the world from a nuclear war. The Biden administration has the power to move effectively toward nuclear disarmament.

“The U.S. could lead the world to eliminate all nuclear weapons. If we take the first steps, others will follow. That will only happen with a major shift in U.S. foreign policy, however,” Condon said. “We need to push our political leaders to peacefully adjust to a multi-polar world that it no longer dominates. Only then will we have real peace and security.”