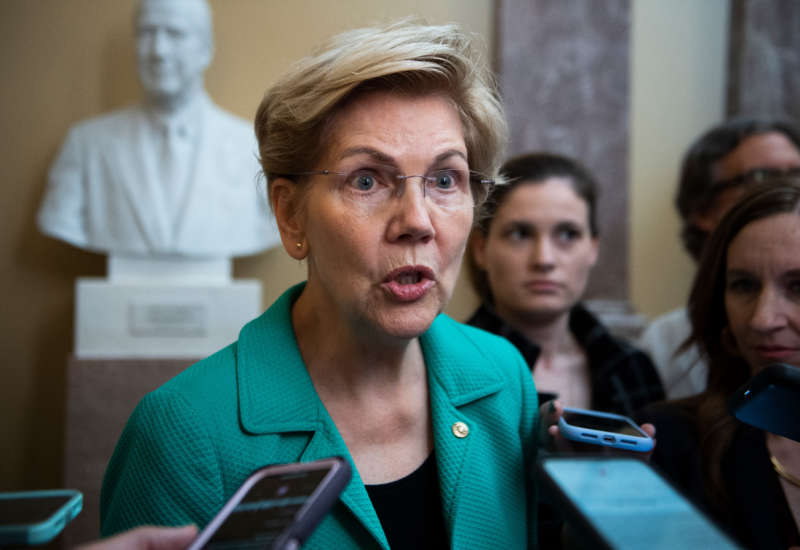 Sen. Elizabeth Warren (D-Massachusetts) is leading a call for increased funding for the Internal Revenue Service (IRS), which is anticipating a “frustrating season” for taxpayers due to underfunding issues brought on by Republicans and corporate interests.

Warren, Sen. Jeff Merkley (D-Oregon) and 13 other senators sent a letter to Treasury Secretary Janet Yellen this week, urging the secretary to do everything in her power to prevent challenges that taxpayers – particularly those who are low-income – may face during this year’s tax season. The lawmakers call for a minimum increase of 14 percent in annual funding for the IRS, as well as an $80 billion investment over the next decade, a measure that President Joe Biden proposed last year to crack down on wealthy tax dodgers.

“We urge you to do everything you can to alleviate challenges for tax filers this year, especially lower-income Americans, while also continuing to work with Congress to make long-overdue investments in the IRS,” they wrote. “We are deeply concerned about the challenges that our constituents will face during this tax filing season, including service issues that have become all too familiar.”

The IRS recently said that it is anticipating “enormous challenges” during this year’s tax season, including delays and service issues. The agency is currently in crisis due to an incredibly chaotic tax season in 2021, which it called “the most challenging year ever for taxpayers” in its annual report. The agency ended the year with about 6 million unprocessed individual tax returns, and closed the filing season last year with over 35 million unprocessed returns, which was four times more than they had before the pandemic.

In their letter, Warren and fellow lawmakers pointed out that the agency only answered one out of every nine calls for assistance, according to its annual report. As 2021’s problems spill into 2022, the IRS is warning that taxpayers may face the same issues this year, or worse.

The lawmakers say that increased funding could help alleviate some of these problems and prevent them from happening in the future.

“It is clear that long-term underfunding, combined with the extra burdens posed by the ongoing pandemic, is the primary reason for the IRS’ challenges,” they wrote.

According to Rettig, the funding issues started years ago; for decades, IRS staffing increased at a rate relative to the country’s gross domestic product (GDP). But that trend has now reversed, and while the GDP has increased by 76 percent since 1995, IRS staffing has decreased by 32 percent overall.

These underfunding issues have been brought on by “corporate lobbyists and anti-tax extremists” who have pushed to cut IRS funding over the years, the lawmakers wrote. “Last year, Republican Senators were initially open to including IRS funding in an early framework for the bipartisan Infrastructure Investment and Jobs Act, but quickly reversed course under pressure from corporate and conservative lobbyists.”

Reporting has found that as Republicans have cut IRS funding over the years, corporations and the wealthy benefit. With less funding, the agency isn’t able to perform as many audits and often doesn’t have the resources to investigate the complex ways that the rich can hide their incomes from auditors. Instead, at the behest of Republicans, the agency has been going after low-income taxpayers in order to catch supposed fraud from the earned income tax credit.

Thanks to tax dodgers, the government has missed out on $7 trillion in revenue over the course of a decade, Yellen estimated last year. Rettig estimated that the IRS misses out on as much as $1 trillion a year.

“This right-wing crusade against the IRS is achieving its primary goal – decreasing U.S. government revenue and denying the IRS the resources it needs to identify and stop the complex tax evasion by the top 1 percent,” the lawmakers wrote.