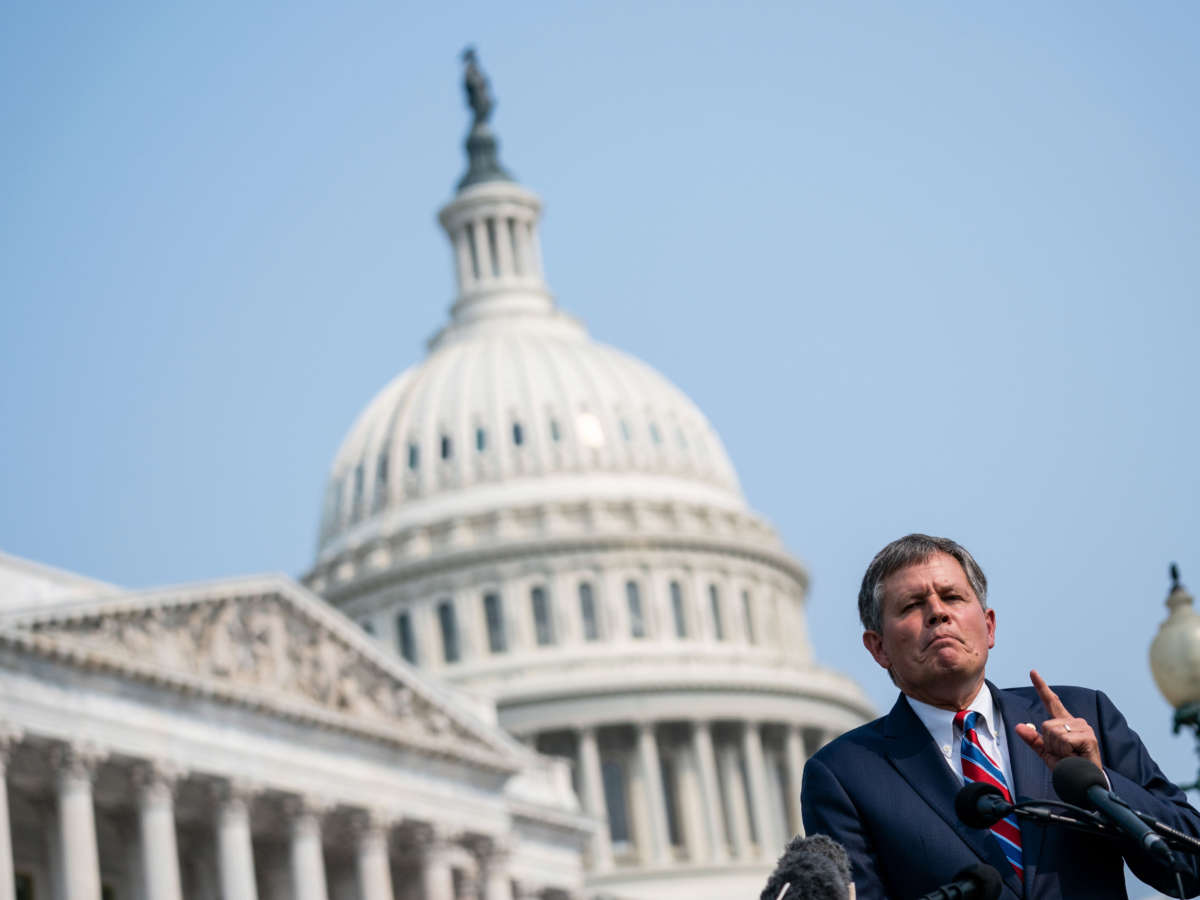 United States Sen. Steve Daines (R-Montana) has made an unusual and absurd argument in favor of allowing abortion rights across the country to be dismantled through a future Supreme Court ruling, using environmental protections for sea turtles and eagles to make his case.

Daines spoke on the Senate floor on Tuesday to compare those environmental standards to abortion protections, arguing against a bill set to be considered on Wednesday that would codify reproductive rights that were recognized in the landmark 1973 Supreme Court ruling Roe v. Wade. The bill, which is in response to a leaked draft opinion written by Justice Samuel Alito suggesting that the Court will soon overturn that precedent, is not expected to pass.

The Montana Republican’s argument rested on the notion that wildlife had more protections than human embryos — disregarding the autonomy rights of individuals altogether.

“Why do we have laws in place that protect the eggs of a sea turtle, or the eggs of eagles?” Daines questioned rhetorically in his complaint. “Because when you destroy an egg, you’re killing a pre-born baby sea turtle or a pre-born baby eagle. Yet when it comes to a pre-born human baby — rather than a sea turtle — that baby would be stripped of all protections, in all 50 states, under the Democrats’ bill that we’ll be voting on.”

Daines on Abortion: Why do we have laws in place to protect the eggs of a sea turtle or the eggs of eagles… pic.twitter.com/yr0dM7aaAs

There are many serious problems, of course, with Daines’s reasoning. For starters, the destruction of another animal’s eggs or offspring in this instance is an action performed by a human being, and the laws he cites are about restricting humans from engaging in actions that could destroy entire species. Meanwhile, abortion is a decision that is made by an individual who is pregnant themselves, who no longer wants to be, a decision that respects their own personal autonomy.

Daines is also hypocritical in his statement — while he uses the protection of certain animals to defend his stance against abortion rights, the senator has regularly promoted legislation that would threaten endangered animals’ lives.

Many people on social media also noted Daines’s problematic arguments against keeping the right to abortion across the entirety of the U.S. intact.

“Shocking no one, Sen. Steve Daines bio says he’s an avid hunter who kills birds,” noted Shannon Watts, founder of Moms Demand. “What do you want to bet he also eats eggs?”

Political commentator Lindy Li also tweeted about Daines’s comments, enjoining them to a number of other preposterous remarks anti-abortion conservatives have made in the past week or so.