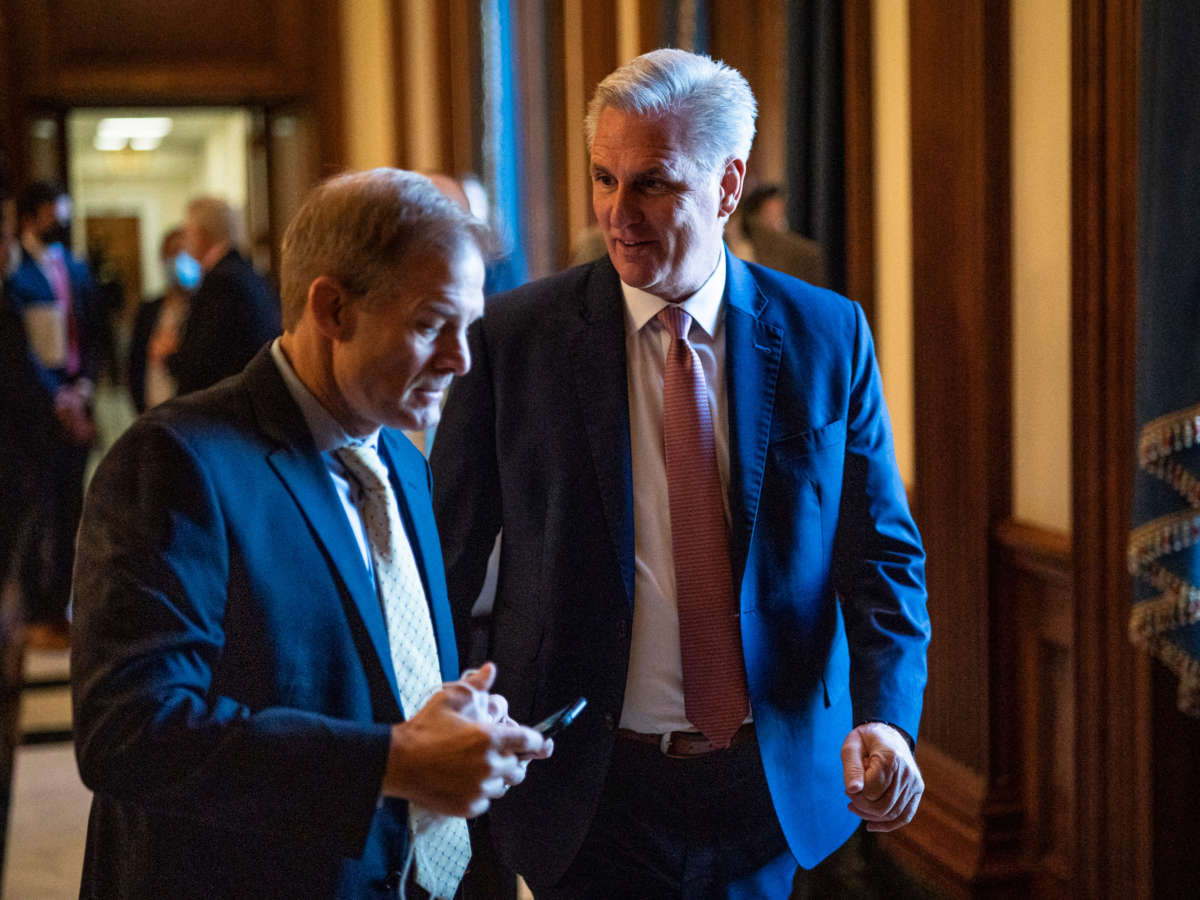 In addition to McCarthy, the select committee is sending subpoenas to Reps. Jim Jordan (R-Ohio), Mo Brooks (R-Alabama), Scott Perry (R-Pennsylvania) and Andy Biggs (R-AZ) — individuals whom committee chair Rep. Bennie Thompson (D-Mississippi) said in a statement have “information relevant to our investigation into the attack on January 6th and the events leading up to it.”

The subpoenas come one month ahead of the committee’s plan to hold public hearings to directly inform the American people about its findings on the Capitol attack, which was carried out by a mob of Trump loyalists to interrupt the congressional certification of the 2020 presidential election.

The subpoenas follow previous requests from the committee for the Republican lawmakers to voluntarily testify before them. “Regrettably, the individuals receiving subpoenas today have refused and we’re forced to take this step to help ensure the committee uncovers facts concerning January 6th,” Thompson said.

The Select Committee has subpoenaed Representatives Kevin McCarthy, Scott Perry, Jim Jordan, Andy Biggs, and Mo Brooks for deposition testimony as part of the committee’s investigation into the January 6th attack on the U.S. Capitol and its causes.

The committee’s statement also details why it is seeking the testimony of each of the five Republicans.

McCarthy was “in communication with President Trump before, during, and after the attack on January 6th,” the committee noted. In one of those discussions, the House Minority leader reportedly got Trump to admit “some culpability for the attack.” The committee will likely ask McCarthy questions regarding his promise to Republican caucus members that he would ask Trump to resign from office due to what had transpired that day.

The statement lists a number of reasons why the committee wants the other GOP House members to testify:

Perry was involved in a plot to install Jeffrey Clark, a Trump loyalist within the Department of Justice (DOJ), as acting Attorney General, in order to make the department more open to promoting state investigations into Trump’s false claims of election fraud, or investigating such claims itself;
Jim Jordan spoke with Trump numerous times in the days surrounding the attack, including on January 6, and was involved in meetings about overturning the 2020 presidential election results;
Andy Biggs attended meetings regarding the planning of events on January 6, and helped coordinate plans to bring Trump loyalists to Washington D.C.; according to the committee, he was also “involved in efforts to persuade state officials that the 2020 election was stolen”;
And Mo Brooks spoke at the same “Stop the Steal” rally where Trump instructed his followers to go directly to the Capitol building; in his speech, Brooks encouraged the mob of Trump loyalists to “start taking down names and kicking ass.” The committee also wants to speak to Brooks regarding his discussions with Trump about rescinding the election results and reinstalling the former president as commander in chief.

The committee was originally reluctant to issue subpoenas to the five Republicans due to time constraints, as lawmakers will likely sue to avoid complying with the subpoenas. Such litigation could take several months and extend beyond the 2022 midterms; if Republicans win the midterms, they’ll likely dissolve the select committee, rendering the subpoenas moot.

The committee has also expressed concern that Republicans could retaliate against committee members if the GOP wins the House during the midterm races.

These subpoenas are rare in that congressional committees don’t typically seek to compel other members of Congress to testify. But committee member Rep. Adam Schiff (D-California) says that the lawmakers’ testimonies could shed light on the events of January 6, as well as the plot to keep Trump in office.

“These are people who participated in the rally, were on the phone with the president, who the president reportedly told to rescind the election and one of whom may have been pursuing pardons for those involved,” January 6 committee member Schiff said. “It’s hard to imagine witnesses with more directly relevant evidence for our committee and more important information for the American people.”