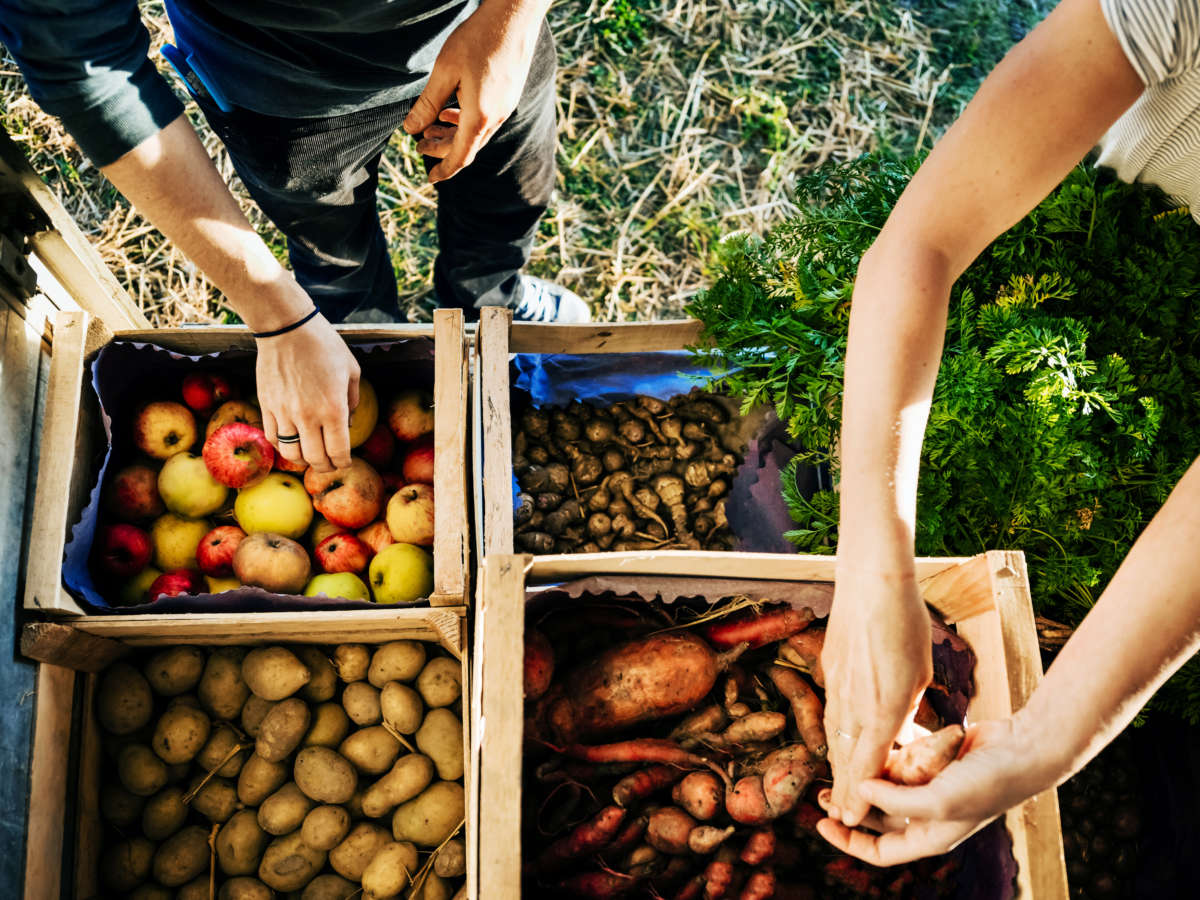 The mainstream media — television, print and digital — routinely cycle through the litany of crises gripping the world. One week they’ll tell us about the latest climate disaster. The next, the focus may shift to the war in Ukraine. A few days later, COVID-19’s latest variant might be trending. The hot topic of the day is picked up, described in isolation and then discarded.

What we never hear is the fact that these crises are, in fact, connected. They are symptoms of a global economic system that is not only driving up resource use and pollution; it is squeezing people financially, undermining democracy, concentrating wealth and power in the hands of unaccountable global corporations, and exacerbating conflict and violence.

In addition, recent events have highlighted how vulnerable we are because of our dependence on the global economy. Long-distance supply chains are failing around the world, and the cost of living is skyrocketing as a result.

This is clearest when it comes to our most basic need of all: food. At the grocery store, Americans are paying 10 percent more for food than a year ago, while the United Nations Food and Agriculture Organization reports that global food prices hit record highs in March. In the United Kingdom, the price of chicken is set to soon match the price of beef.

Why? Largely because economic globalization — which, in short, involves using public monies and government regulations to favor exports over self-reliance — has ensured that we source our food from ever farther away, via ever longer, more complicated supply chains.

That means that when China shuts down in response to COVID, it affects the whole world. When Russia invades Ukraine, global supplies of grains, vegetable oil and chicken feed are jeopardized. When energy prices rise, so do food prices, because industrial agriculture for export is built on fossil fuel-based fertilizers and fuel-guzzling transport. When synthetic fertilizer production facilities shut down because the price of fracked gas is too high, chemical-dependent farmers’ yields fall.

And when fears grow, they snowball: Countries across the globe have halted food exports for fears of food insecurity.

This would not be nearly so big a problem if the entire globe hadn’t been made so dependent on global trade for basic needs. Consider the fact that global trade volume is now roughly 40 times greater than it was in 1950. As governments — at the behest of global corporations — continue to subsidize and regulate in favor of global trade, people’s lives and livelihoods are at the mercy of middlemen operating transnationally.

Thanks to globalization, food produced regionally or nationally is more likely to be exported than to feed the local population: They’ll eat food imported from elsewhere. The situation is now so absurd that countries regularly import and export nearly identical quantities of identical products. In 2019, for example, the United States imported 1.53 million tons of beef, even as it exported 1.51 million tons. In 2020, Germany was the world’s top importer of butter ($851 million), and also the fourth-largest exporter of butter ($653 million). That year, France both imported and exported about $1 billion worth of beef. These are not outliers but typical examples of “redundant” trade in the global economy.

The list of actual and potential hiccups along these fragile supply chains is virtually endless. Those we have experienced recently include pandemic lockdowns, a blockage in the Suez Canal, and avian flu outbreaks. Last week, the Royal Bank of Canada reported that one-fifth of the global container ship fleet is currently stuck in congestion.

During the pandemic, most countries would have been far better off had they relied more on local production, rather than on specialized production for global trade.

These are but harbingers of worse to come. The global food system itself — based as it is on chemical-intensive industrial monocultures for export — has decimated seed and livestock diversity, and is rapidly eroding topsoil and depleting fertility in our most important food bowls. Add to all this the fact that this food system is responsible for up to 57 percent of all greenhouse gas emissions, and widespread food system collapse is very possibly imminent.

Can we assume that these and other real-world effects will finally lead to a rethinking of “comparative advantage” — a cornerstone of the modern economy? The 1817 theory — an article of faith among supporters of “free trade” and globalization — asserts that if countries specialize in what they produce best and trade for every other need, all countries will be better off.

The theory of comparative advantage may have been plausible 200 years ago, but globe-spanning supply lines make no sense in our increasingly fragile world. During the pandemic, most countries would have been far better off had they relied more on local production, rather than on specialized production for global trade.

Unfortunately, political leaders on both left and right have ignorantly continued to promote economic globalization despite its mounting costs. Their policies have enabled multinational corporations and banks to accumulate immense wealth: By 2000, more than half of the largest economies in the world were corporations. Their wealth enables them to distort the democratic process through campaign donations and vast lobbying efforts, and to spend billions of dollars shaping public opinion through advertising, data mining and media ownership. Trade agreements even allow transnational corporations to sue governments if environmentally or socially conscious laws or regulations get in the way of corporate profits. In short, globalization has reshaped society in the interest of unaccountable, internationally mobile corporations.

For many rather obvious reasons, this is a bad idea. For example, it is the main reason why governments have continuously failed to act on the climate crisis. It is why profit-driven media have become ever more polarizing and incendiary. It is why local businesses are being driven to bankruptcy by global giants, and why communities are being broken apart and amalgamated into ever-bigger, more anonymous, more resource-intensive megacities. It is why billionaires continue to get richer and richer, even as the majority of the world’s people must run ever harder and faster just to stay in place. As the resources needed to fuel this globalized system become more scarce, conflict both within and between countries is seen to rise.

The fact that these seemingly disparate issues are connected by their shared roots in the globalizing economic system is, perhaps counterintuitively, a reason for hope: By focusing on that root cause, we can more easily take steps that address all of those problems simultaneously.

And although we haven’t heard much about it in the media, initiatives across the world are proving the multiple benefits of shifting away from dependence on global corporations toward place-based, community businesses. These projects can be seen on every continent and constitute a movement toward what can best be described as “localization.”

Ordinary people are responding to the specter of food insecurity by boosting localized production of food and other basic needs. At the onset of the COVID pandemic, small farmers from Melbourne, Australia, to Mexico City were able to ramp up production in a matter of weeks to meet a doubling of demand, proving that local farms and businesses are not only much more resilient in the face of global crises but also far more responsive to the needs of their communities. We have heard from a number of sources that these farmers didn’t raise their prices, even though they ended up working harder and employing more people.

Similarly, people are organizing into informal community networks to help each other deal with the havoc of COVID lockdowns and — increasingly — climate shocks. In many cases, these informal groups have proven to be much more effective than centralized bureaucracies. They also galvanize community solidarity and lift people’s spirits in ways that simply cannot be achieved by large-scale organizations.

Because they’re happening under the radar, no figures will do justice to the proliferation of such informal groups. But it is telling that, in the U.K., more than 4,000 mutual aid groups emerged in 2020 alone.

Ordinary people are responding to the specter of food insecurity by boosting localized production of food and other basic needs.

Community mutual aid networks represent but one facet of a much broader movement for localization. Although sorely underrepresented in the mainstream media, concern for climate change, corporate rule and mental health are giving rise to a plethora of localizing responses.

A local food movement is growing on every continent. While the number of farmers’ markets in the U.S. has quadrupled over the last 20 years, organizations fighting for local food sovereignty are among the largest social movements in the world, representing more than 200 million small farmers.

Local food systems — which are based on small-scale, biodiverse production — not only dramatically cut greenhouse gas emissions but actually regenerate the land. Studies by the Rodale Institute suggest that shifting to such techniques on all cultivated and pastureland would enable us to rebuild soils and sequester over 100 percent of current CO2 emissions. This doesn’t mean a reduction in production: Small farms produce up to five times more food per acre than industrial monocultures.

What’s more, reorganizing our economies around local interdependence instead of global dependence would significantly increase community prosperity. A 2021 U.K. study, for example, reveals that local food outlets create three times as many jobs for the same amount of food sold as supermarket chains.

Meanwhile, regional government support for local, craft-based economies in some parts of rural India has increased earnings by more than 60 percent for hundreds of thousands of people, while slowing the widespread and damaging trend of hyper-urbanization.

Stronger local economies are important not only for the financial and employment benefits they provide, but also for the closer contact with nature and with community they offer. In a Norwegian study, the simple act of community gardening was shown to be more than twice as effective in treating depression as chemical antidepressants. Participants in such programs have overcome devastating mental illnesses and have described their experiences movingly (“as the garden began to bloom, we began to bloom”).

By understanding the root causes of our global crises, we can begin to identify systemic solutions. What’s more, we can also see that these solutions are already being pioneered by ordinary people all across the globe, acting with little if any government support but on goodwill and common sense.

This June, under the banner of “World Localization Day,” numerous projects and networks working toward economic localization are coming together to make their global movement known. The campaign demonstrates that localization is not about isolationism — in fact, cross-cultural collaboration is an integral part of the movement. World Localization Day is also an attempt to break the corporate stranglehold on information: While the mainstream media excels at highlighting the disparate symptoms of systemic breakdown, it fails to connect the dots between these symptoms, nor does it identify the plethora of real-life systemic alternatives.

The next time the daily news makes you painfully aware of the many crises we face, remind yourself that we don’t have to fight each problem on its own. We can instead expose their root causes and work together to withdraw dependence on the global system while reweaving local interdependence. We can join the movement to solve multiple crises at once.