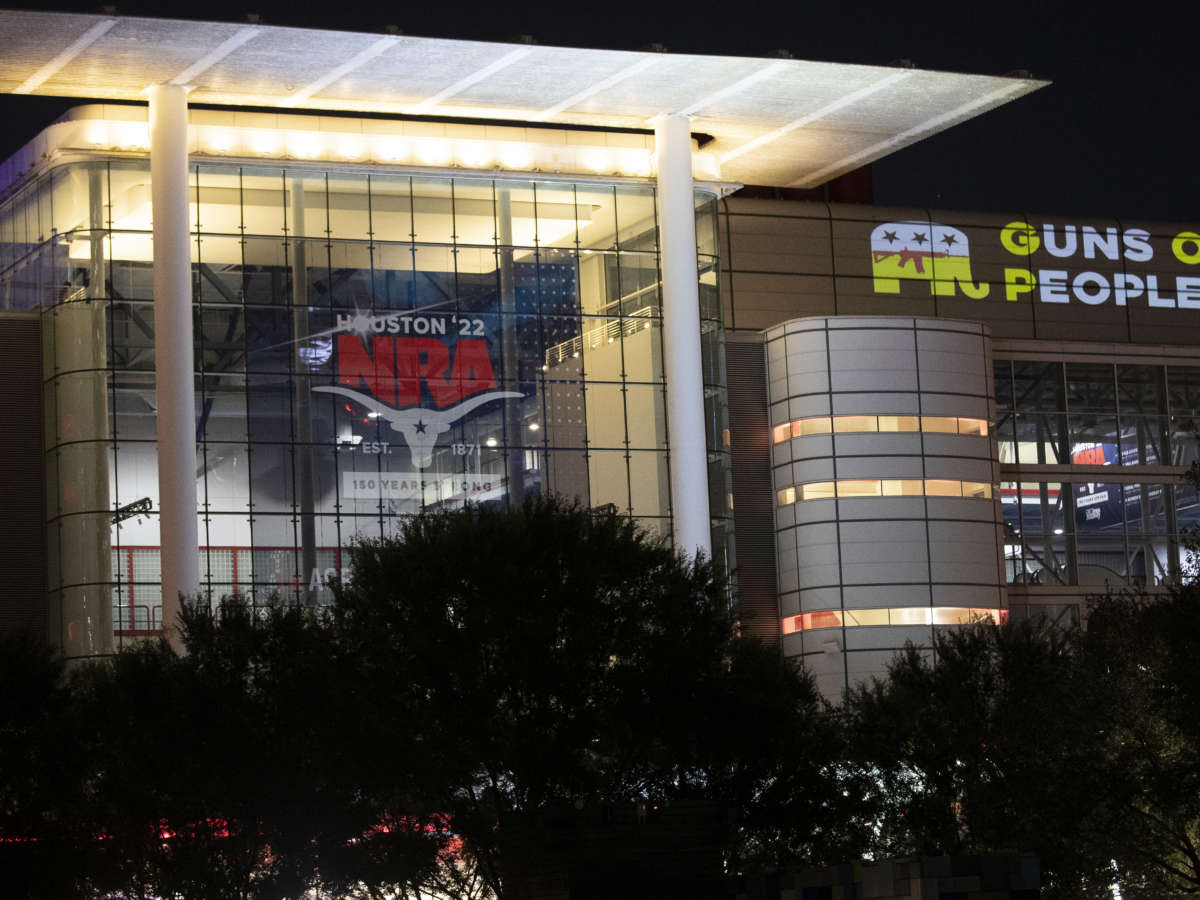 Texas representatives in the 117th Congress took more money from gun rights groups than lawmakers in any other state, a new OpenSecrets analysis found.

Senators and House members representing Texas have received more than $14 million in contributions from gun rights interests over the course of their careers, with much of that coming from the National Rifle Association.

Texas also ranks second among the 19 states tracked by OpenSecrets for state-level lobbying by gun rights groups with more than $3 million in spending from 2015 through 2021. During that period, the NRA spent more on state-level lobbying in Texas than any other state in the 19 states tracked by OpenSecrets with over $2.5 million in spending.

The influence gun rights groups exert in Texas is also evident in grassroots organizing and advocacy efforts spearheaded by the NRA.

The NRA is holding its annual meeting this weekend in Houston — just a few hours drive from the elementary school in Uvalde, Texas, where at least 19 children and two teachers were killed in a shooting on Tuesday.

Multiple politicians are slated to speak at the event, which is expected to be the year’s largest for the gun lobby after previous events were canceled due to the coronavirus pandemic.

Some of the convention’s planned headliners — including Texas Gov. Greg Abbott — canceled in-person appearances after facing criticism for taking money from the NRA and continuing with plans to speak at the event after the shooting. Abbott is still scheduled to address attendees in a pre-recorded video message.

Trump is scheduled to headline a forum at the NRA’s annual meeting, and the NRA issued a notice telling attendees they will not be able to carry firearms, toy guns or “weapons of any kind” during the forum headlined by Trump.

Trump’s presidential election bids received significant financial support from the NRA. The gun rights group spent a record $54.4 million on 2016 federal elections, with most of that spending routed through the NRA’s flagship lobbying arm, a 501(c)(4) “dark money” group that does not disclose its donors. Nearly all of the NRA’s 2016 spending went to boosting Trump’s presidential election.

Though tax records show the main NRA lobbying arm’s revenue dipped down to about $282 million in 2020 after ending multiple years in the red, the group still poured tens of millions of dollars into influencing elections. Most of the $29 million that the NRA spent on 2020 federal elections also went to supporting Trump in the final months before Election Day.

Sen. Ted Cruz (R-Texas), who is slated to speak at the NRA’s annual meeting, is the top recipient of political contributions from gun rights interests, drawing about $749,000 over his career.

The NRA event schedule includes a prerecorded video message from Texas Gov. Greg Abbott, a Republican with a long history with the gun rights advocacy organization. Abbot has received more than $20,000 in contributions from gun rights groups with most of that coming from the NRA and the Texas State Rifle Association.

In June 2021, multiple members of NRA leadership — embattled NRA chief executive Wayne LaPierre and NRA president Carolyn Meadows — joined Abbott for a special bill signing ceremony for House Bill 1927, NRA-backed legislation that allows Texans to carry handguns for self-defense without a license from the state so long as they don’t have a criminal history.

Paxton won the GOP nomination Tuesday in a runoff against Texas Land Commissioner George P. Bush, the son of former Florida Gov. Jeb Bush. In November, Paxton will face off against Rochelle Garza, a civil rights attorney who won the Democratic nomination.

As he runs for reelection, Paxton is under indictment for felony securities fraud charges from 2015 but has pleaded not guilty and is still awaiting trial. In addition to the felony charges, Paxton is also reportedly under FBI investigation for accusations of corruption and the State Bar of Texas is considering whether to take action against Paxton for his role in filing a lawsuit challenging presidential election results in four states won by President Joe Biden. The U.S. Supreme Court declined to hear the case.

After the shooting, Paxton suggested arming teachers as a possible solution.

Paxton is a longtime champion of the firearms industry, and the industry in turn has poured money into supporting the controversial politician.

The NRA, the Texas State Rifle Association and the Gun Owners of America Political Victory Fund have all given political contributions to Paxton.

Paxton “welcomed” the NRA to Texas when the gun rights organization ​​filed for Chapter 11 bankruptcy in January of 2021, seeking to restructure in Texas and avoid legal action in New York. New York’s attorney general began investigating the National Rifle Association on corruption charges in 2019 and moved to dissolve its 501(c)(4) nonprofit in 2020.

“The NRA has been instrumental in defending our Second Amendment rights and we would welcome them with open arms to relocate in Texas!,” Paxton tweeted at the time.

In April, Paxton signed on to an amicus brief supporting the NRA’s petition in partnership with the California Rifle and Pistol Association asking the Supreme Court to hear Duncan v. Bonta, a case challenging California’s ban on magazines that can hold more than 10 rounds.

Contributions from gun rights groups in the Lone Star State are not limited to Republicans.

Rep. Henry Cuellar (D-Texas) is one Democratic incumbent who has a history with the NRA.

Cuellar faced progressive challenger Jessica Cisneros on Tuesday in Texas’ primary. While Cuellar declared victory, his lead was less than 200 votes and ballots are still being counted so the race may be headed for a runoff. The winning Democrat will go up against Cassy Garcia, a former aide to Sen. Ted Cruz (R-Texas) who won her own runoff in the Republican primary Tuesday.

The NRA has poured tens of thousands of dollars into donations to Cuellar and outside spending boosting Cuellar since he was elected to Congress, totaling $31,669 since 2002.

Most recently, Cuellar’s 2018 reelection campaign accepted $6,950 in donations from the NRA Political Victory Fund. A campaign spokesperson told CNBC that Cuellar doesn’t plan on giving the NRA’s money back or to charity, reportedly asking, “Why would he do that?”

Cuellar held an A rating with the NRA going into the 2018 midterms and was one of only three Democrats who received campaign contributions from the NRA that cycle. But his rating dropped from an A to a C after he backed an expansion of background checks. The NRA has not given to him since the 2018 election cycle.

Both Sides of the Gun Control Debate Spend Big in California

California ranks No. 1 for members of Congress taking money from groups advocating gun control with $968,754 in contributions over the course of their careers but lawmakers in the state have taken money from groups on both sides of the issue.

As two of the biggest states in the country, California and Texas each have more representatives in Congress than any other state, meaning more lawmakers in the states may already be more likely to cumulatively attract more money.

But many individual lawmakers in these states are also major recipients of funds from gun groups, and the states were the two top targets of lobbying spending by gun rights interests in the 19 states tracked by OpenSecrets.

California lawmakers recently advanced a package of gun control bills, including one sponsored by Democratic Gov. Gavin Newsom that uses the structure of Texas’ abortion ban to crack down on illegal firearms.

Newsom opened the legislative session this year with a call to action inspired by Texas Republicans and the conservative majority on the nation’s highest court.

The law would give Californians the right to sue manufacturers, sellers and distributors of illegal assault weapons, ghost guns and certain firearms and to collect at least $10,000 in civil damages per weapon — effectively putting a bounty on guns.

Other gun proposals in California include bills to ban the advertising of certain firearms to minors, require school officials to report any “perceived threat” of a mass shooting to law enforcement, ban firearm sales on government property and compel firearm dealers to increase security.