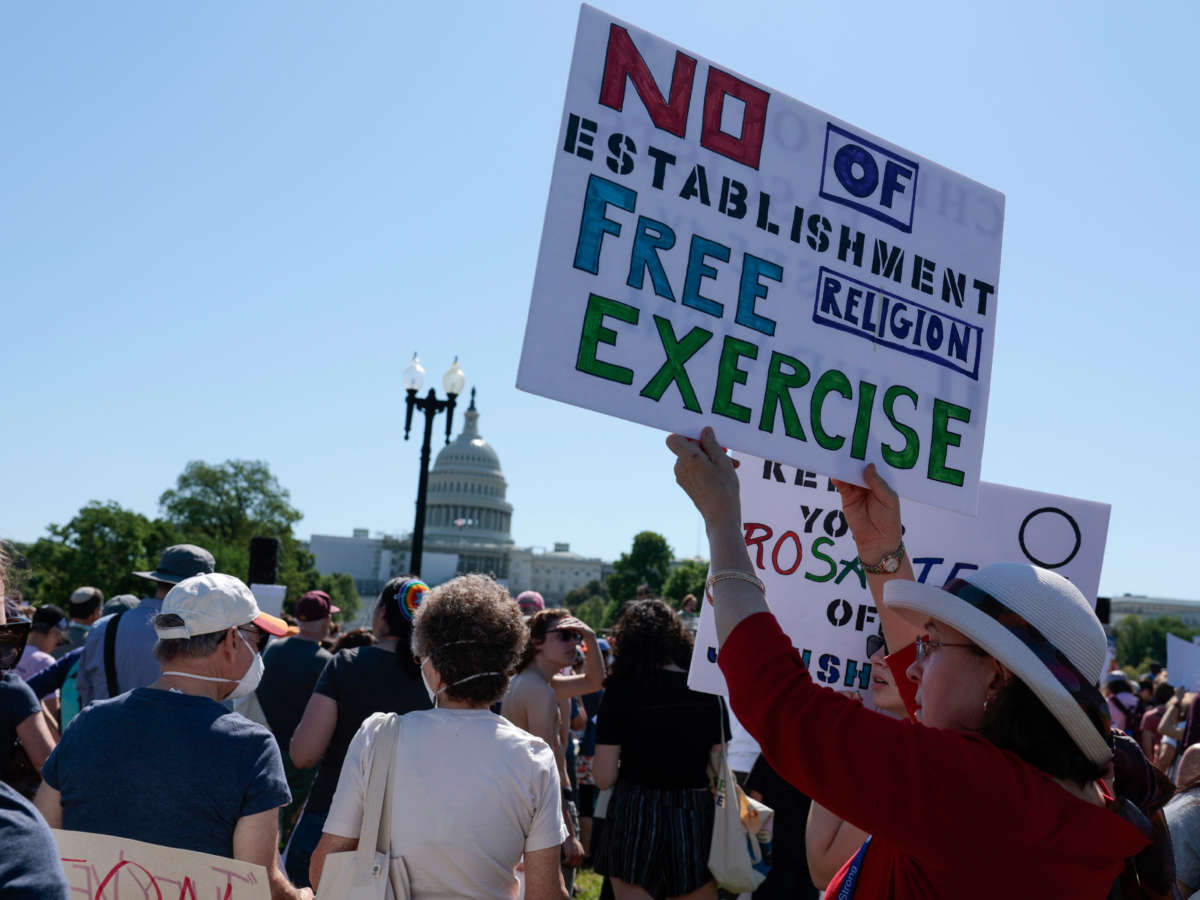 Roe v. Wade was decided per a right to privacy based on the due process clause of the 14th Amendment, but there is another, perhaps at least equally compelling, way to look at the abortion issue — and that is through the lens of the establishment clause of the First Amendment.

But the abortion question is also an Enlightenment question of self-determination versus determination of self by other. In this case, that “other,” the prohibitor of abortion, would be a religious form of the state; the state having been captured, unconstitutionally, by a theocracy. Legal limitation, suppression or criminalization of abortion on religious grounds would smuggle in a theocratic state, one which adheres to one doctrine and excludes all others.

In the United States today, Roman Catholicism and Christian fundamentalism would legally institutionalize their anti-abortion doctrine, thus violating the First Amendment dictum that “Congress shall make no law respecting an establishment of religion, or prohibiting the free exercise thereof.” But Catholicism and Christian fundamentalists stake their anti-abortion claims on the existence of the soul at conception.

Religious Views of Ensoulment and Abortion

In religious contexts, ensoulment is thought to take place when the soul comes into the body.

In Catholicism the moment of ensoulment has doctrinally varied over time. About 150 years ago, the church taught that ensoulment occurred at “quickening,” the moment when the pregnant person could feel the fetus moving in their body. (In their first pregnancy, a person typically feels fetal movement at about 18-20 weeks.

If they have given birth at least once, they will typically feel movement around 15-17 weeks.)

Before the Vatican reversed course on the subject of Limbo in 2007, Catholics believed a soul may not be admitted to heaven unless its body was baptized. Some Catholics may still believe that since fetuses are not baptized, their souls may not go straight to heaven but must hang around in Limbo, which is itself a speculative concept. For some Catholics, abortion causes there to be lost and wandering souls.

Christian fundamentalists claim that aborted fetuses, which they term unborn or preborn children, go straight to heaven because they are innocent and know nothing of original sin and are too young to be saved.

Other religions have different takes on the ensoulment question. The Mormon church’s position is that “human beings have 3 stages of life: Pre-existence as spirit children, a time of probation on earth, Eternal life with the Heavenly Father.” The Mormon church allows exceptions to its abortion ban due to pregnancy resulting from rape or incest, when the parent’s health is medically determined to be in serious jeopardy, or when it is medically determined that the fetus is so defective as not to be able to allow the baby to survive past birth.

In Judaism there is no fully developed theory of the timing or nature of ensoulment. This could be because Judaism does not include a strict separation of soul and body. However, the Talmud does speculate on when ensoulment might occur. But it appears that the Talmud dismisses [the ensoulment] “question as both unanswerable and irrelevant to the abortion question.”

Islam, meanwhile, traditionally did not hold that ensoulment occurred at conception. Currently, there are three views of when ensoulment occurs in Islam: at 120 days, at 40 days or when there is voluntary movement of the fetus — ranging from the 12th to the 20th week of gestation.

For Hinduism and Buddhism, the eternal soul is ever being reborn unless and until Moksha or Nirvana is attained. Per Hindu doctrine, and similar to Catholic and Christian fundamentalist views, many Hindus believe that, “The soul and the matter which form the fetus” are “joined together from conception.” Still, in Hinduism, “If a foetus is aborted, the soul within it suffers a major karmic setback” and is “deprived of the opportunities its potential human existence would have given it to earn good karma.” So, this soul is then, “returned immediately to the cycle of birth, death and rebirth.”

Banning Abortion and the First Amendment

The 14th Amendment tells us that constitutional rights may only be conferred on “persons born or naturalized in the United States.” At this point, modern science shows us that these persons must have been in the womb for at least 24 weeks, and they must be born. We must not substitute theocratic law for constitutional law.

Given this, legislation such as Alabama’s outright abortion ban, (which has been delayed by litigation), or other restrictive ordinances recently passed in Texas, Oklahoma and Mississippi enshrine in law select religious views of the question, namely Catholic doctrine and Christian fundamentalist doctrine.

It may be said that such laws would create a specific state “establishment of religion,” (echoing the Christian nationalist mantra that the U.S. “is a Christian country”) and simultaneously prohibit to birthing people and people of other faiths or no faith at all the “free exercise” of their beliefs. As such, abortion bans are violations of the First Amendment to the U.S. Constitution and must be struck down. Choice in abortion matters is about: 1.) freedom from state religion; 2.) self-determination, not determination of self by other and 3.) freedom of religion.

Denial of abortion exemplifies theocratic or reactionary forces’ domination of the state. The same reactionary state control used to force birth could also be exercised to prohibit pregnancies among specific categories or groups of people. This has already occurred in U.S. history with respect to the sterilization of the “feeble-minded,” and more recently sterilization of Puerto Rican women.

White supremacist and antisemitic “Great Replacement” ideology (in a word: fascism) claims that a declining birth rate of white Americans, coupled with the increased fertility rate of people of color and increased immigration, heralds their eclipse as the majority group in our country. It is demographically predicted that the U.S. will become majority nonwhite somewhere between 2040-2050. On this view, abortion bans are not only a theocratic strategy; they are also a strategy for preserving the white majority.

It’s a strategy we’ve seen used by fascists before. A memorandum to SS Officer Adolf Eichmann from Nazi-occupied Poznan, Poland, noted that “all the Jewish women, from whom one could still expect children, should be sterilized so that the Jewish problem may actually be solved completely with this generation.” Simultaneous with the sterilization of Jewish women, German women were awarded the Mother’s Cross for having four or more children for the Third Reich.

Ultimately, what the First Amendment argument affords is not just a defense against opposition to abortion and forced sterilization, but a fresh look at adjudication of questions pertaining to religious bans on other intimate matters, such as contraception use, when viewed as attempted theocratic intrusions within our society.