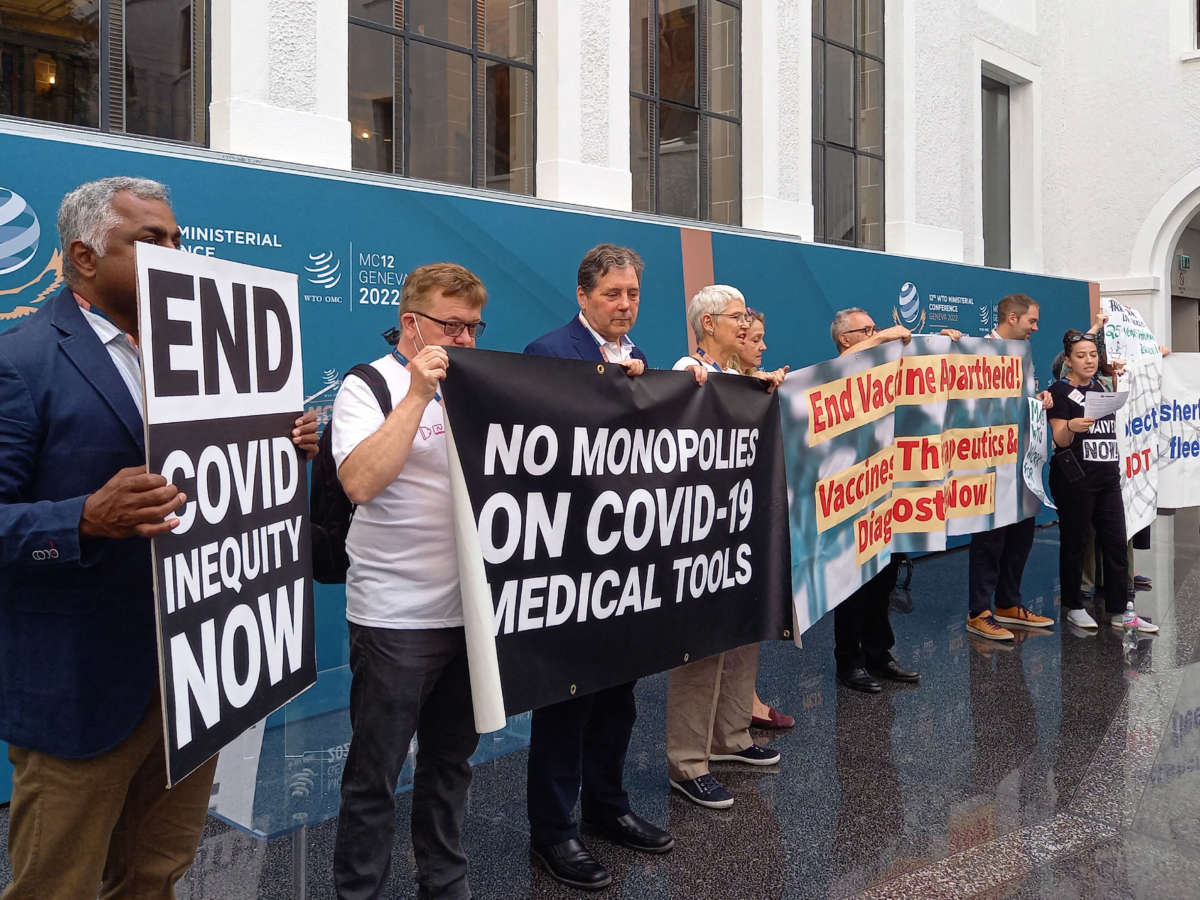 The 12th Ministerial Conference of the World Trade Organization kicked off in Geneva on Sunday amid mounting protests against rich nations’ refusal to support a patent waiver for coronavirus vaccines and therapeutics, obstruction that has left billions of people around the world without access as Covid-19 continues to spread and take lives.

While WTO Director-General Ngozi Okonjo-Iweala voiced “cautious optimism” that member countries will ultimately reach an agreement on patents and other key items on the body’s agenda, civil society groups warned that the intellectual property text currently on the table represents such a departure from South Africa and India’s original proposal that it can’t even be called a waiver.

“We are extremely disappointed to see that even after 20 months of deliberations and more than 15 million deaths due to Covid, the negotiations are still eons away from ensuring access to lifesaving Covid medical tools for everyone, everywhere,” said Candice Sehoma, advocacy adviser for South Africa at Médecins Sans Frontières (MSF).

“The draft decision text is based on a problematic text from early May and is substantively different from the real waiver proposal we have been supporting,” Sehoma continued. “What we’re seeing so far is some limited changes, not real progress.”

Upon their arrival in Geneva on Sunday, WTO ministers were greeted with protests demanding that they resist lobbying from the pharmaceutical industry and suspend coronavirus-related patents, a move that proponents say would enable low-income countries to produce their own coronavirus vaccines without fear of legal retribution.

Thus far, Pfizer, Moderna, and other vaccine makers have closely guarded their patents and vaccine recipes, and the governments of wealthy countries have done little to force them to share despite the public funding and technology that made the coronavirus vaccines possible.

Critics argue that far from eliminating patent-related barriers to vaccine production, the current draft text at the WTO would actually create more, further hampering the fight against Covid-19 and undermining efforts to prepare for future pandemics.

“The text under negotiation at the WTO is not the TRIPS waiver that more than a hundred developing country governments have been fighting for, backed by a global movement of millions,” Anna Marriott of People’s Vaccine Alliance warned Sunday. “It would be unthinkable for the WTO to do nothing in a pandemic, but entirely unconscionable to agree to a deal that would make a bad situation even worse.”

“We are deeply concerned that rich nations are negotiating to protect the interests of pharmaceutical corporations, enabled by a WTO intent on saving its own reputation, whatever the cost to public health,” Marriott added.

Protesters are also outside the WTO’s #MC12 itself demanding that the EU, UK, Swiss & US governments stop putting Big Pharma profits ahead of saving lives & ending the pandemic /12-GENEVA pic.twitter.com/1I0iANk4vA

On the opening day of the pivotal conference, the representatives of wealthy nations gave little indication that they’re prepared to drop their support for the pharmaceutical industry’s patent protections, which have allowed a handful of companies to rake in huge profits as large swaths of the globe remain unprotected against Covid-19.

As Swiss lawmaker Stéfanie Prezioso put it Sunday, Switzerland and other rich countries are acting as “henchmen for Big Pharma.”

During remarks on Sunday, Udo Philipp — Germany’s state secretary at the Federal Ministry for Economic Affairs and Climate Action — said the current moment requires a “reliable framework to protect intellectual property rights,” not suspend them in the interest of equalizing vaccine access.

Germany, home to Pfizer’s vaccine partner BioNTech, has long been one of the chief obstacles to substantive patent waiver talks. Because the WTO operates by consensus, obstruction by just one nation is enough to derail progress.

But Germany hasn’t been alone. Despite paying lip service to the need for a patent waiver of some kind, the United States has faced backlash for dragging its feet at recent WTO talks and refusing to pressure holdout allies such as the United Kingdom, Canada, and Switzerland.

U.S. Trade Representative Katherine Tai didn’t use the word “waiver” during her comments at the WTO conference Sunday, expressing support for “accommodations to the intellectual property rules for Covid vaccines that can facilitate the global health recovery needed to make possible a robust global economic recovery.”

Patent waiver talks have gone virtually nowhere in the year since the Biden administration publicly endorsed a patent waiver, describing it as a necessary step given “the extraordinary circumstances of the Covid-19 pandemic.”

Sehoma of MSF argued in a statement that while “it is not yet too late to agree on a real waiver over the coming days,” it is “imperative that governments stand strong against the inclusion of problematic provisions and strive for an agreement that adequately overcomes intellectual property and restrictive pharmaceutical corporation licensing so that countries can be more self-reliant in providing all Covid medical tools to their people, which is the intention of the original TRIPS waiver proposal.”

“If governments agree on an outcome text that fails to include all essential medical tools, all countries, and all major intellectual property issues,” said Sehoma, “then it will be both a failure to ensure that people have access to lifesaving medicines, vaccines, and diagnostic tests during this pandemic, and will set a deadly precedent for future global health crises.”