Does the Future of US Democracy Hang on Talks Between Clarence and Ginni Thomas? 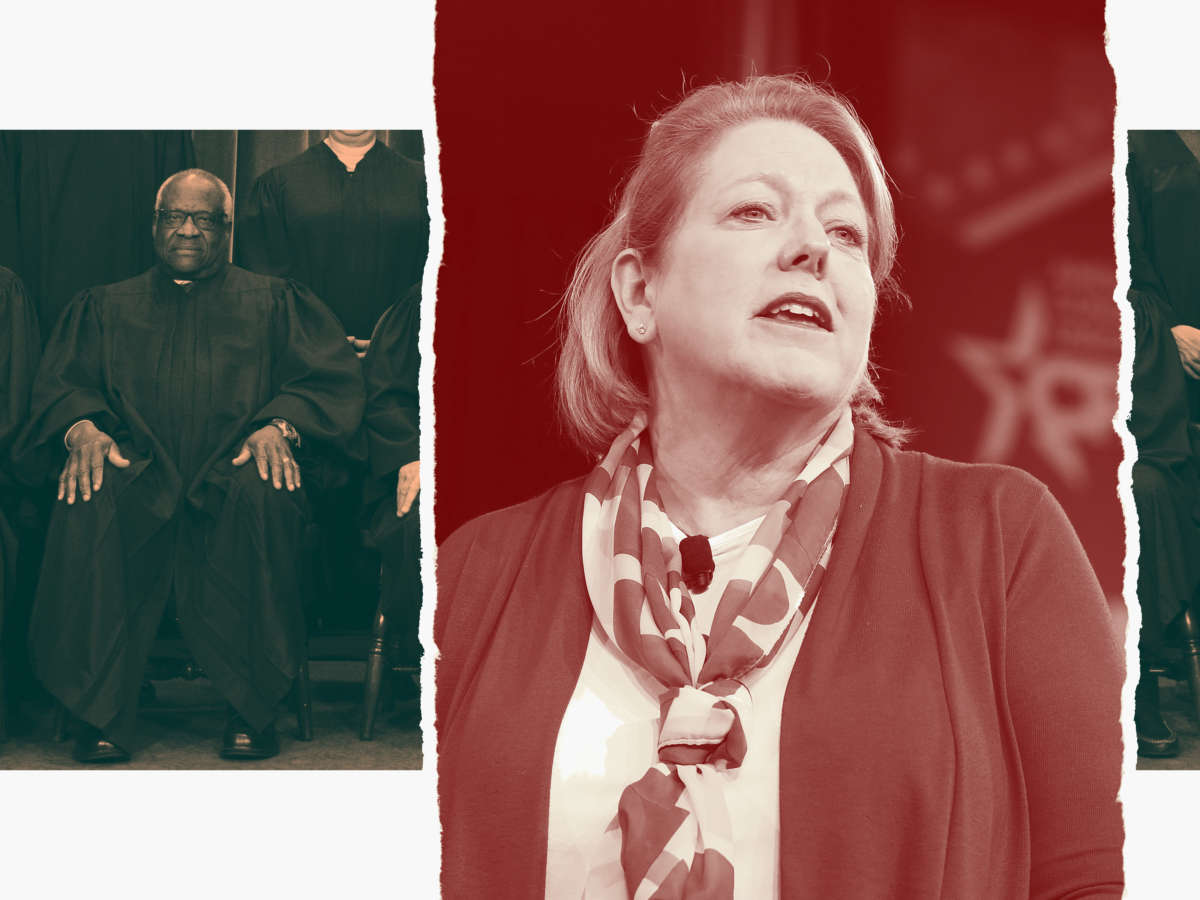 Virginia “Ginni” Thomas — the far right political activist who is married to Supreme Court Justice Clarence Thomas — is once again in the news due to reports that the House select committee investigating the January 6 attack has unearthed a string of email correspondence between her and conservative attorney John Eastman, who pushed Mike Pence to refuse to certify the election results that booted Donald Trump out of the White House.

Reporters have not yet accessed details about the email thread’s contents, but its existence alone has raised even more red flags about Ginni Thomas’s alleged involvement in Trump’s plot to overturn the election.

According to CNBC, the January 6 committee announced today that it now plans to “invite Ginni Thomas to testify about her involvement in efforts to reverse Donald Trump’s presidential election loss.”

This is not the first time that evidence has emerged about Ginni Thomas’s role in ​​strategizing ways to find legal rationales to pressure Mike Pence to essentially declare various state elections null and void, and simply reinstall Trump as president.

Back in March the House committee investigating January 6 obtained details about text messages that Ginni Thomas sent to former President Donald Trump’s chief of staff, Mark Meadows, urging him to continue the fight to overturn the election results. As stories like these have done the rounds, calls have grown for Clarence Thomas to recuse himself from any and all Supreme Court cases relating to elections and their legitimacy. To date, he has refused to recuse himself.

This is a story that gets more awful the more we know. Last week’s devastating revelation was that in the weeks after the election, Ginni Thomas contacted 29 Arizona legislators, urging each and every one of them to decertify Arizona’s vote and instead “choose” alternative electors who would cast their lot with Trump. Had they done so, they would have taken a very deliberate step to overturn the will of the people, and a significant step to destroy democracy in the United States.

Thomas isn’t some lone eccentric simply trying to project her personal opinion. She is a leading operative on the board of a shadowy right-wing coordinating group called the Council for National Policy (CNP).

In the mid-1990s, when I was fresh out of journalism school and accepting pretty much any freelance assignment that I could lay my hands on, I worked for several months as a researcher on a book called The Armchair Activist. It documented the various organizations that made up the spine of the U.S.’s fast-growing far right and ultraconservative movements, and was intended as a how-to handbook providing organizing tools for progressives to counter these groups.

One memory of the project that stands out is the tentacle-like behind-the-scenes power of the CNP. Out of the public eye, the organization, which had been set up 15 years earlier, in 1981, quietly but extraordinarily effectively developed policy goals — and organizing methods to reach those goals — that covered pretty much everything from restricting the franchise, to demolishing the social safety net, to ending access to abortion and expanding access to guns.

The New York Times has, quite correctly, labeled the CNP a “little known club of a few hundred of the most powerful conservatives in the county.” Think of it as a sort of exclusive country club, where conservative icons, such as the Koch brothers, the DeVoses, the Scaifes, and other wealthy luminaries of the right go to brainstorm and break bread with less wealthy but politically well-connected men and women such as Ginni Thomas.

In recent years, it has gotten increasingly influential. During Brett Kavanaugh’s confirmation hearings, the CNP met, in secret, for a three-day strategy meeting, to plot a way toward implementing a hyper-conservative social, cultural and religious agenda given the new conservative majority on the Supreme Court. Attendees included a slew of top Republican political figures — including Rep. Jim Jordan — conservative donors, and Christian-right leaders.

In March 2020, Vice President Mike Pence thanked the organization for “consistently amplifying the agenda of President Trump.” That same year, Trump himself spoke for a full hour at the organization’s annual meeting.

When I was researching The Armchair Activist, I remember drawing a series of diagrams, putting the CNP in a big circle in the center, and, with great theatricality, explaining to my fellow researchers how all of these different individuals and organizations connected via this coordinating hub.

In the decades since, every so often I’ve encountered a policy or organizing effort in which the CNP was involved and been startled, all over again, at just how powerful this secretive organization is.

In the weeks after the election, Ginni Thomas contacted 29 Arizona legislators, urging each and every one of them to decertify Arizona’s vote and instead “choose” alternative electors who would cast their lot with Trump.

A hundred years from now, when historians want to understand how this country lurched so far rightward in such a relatively brief period of time, the critical role of the CNP in helping to shape and implement the right-wing agenda will, I am sure, be pored over.

That the spouse of a sitting U.S. Supreme Court justice is a board member of this group and an activist pushing its radical right causes, ought to give anyone who cares both about the state of U.S. democracy and about the legitimacy and independence of the country’s top judicial institution serious pause. In a stunning exposé earlier this year, The New York Times Magazine argued that no spouse of a sitting Supreme Court Justice has ever, in U.S. history, been more of an overt political activist than Ginni Thomas.

The Thomases claim that there is somehow an iron wall separating their two careers — that Clarence Thomas has nothing to do with Ginni Thomas’s political organizing efforts. That’s clearly not the case. In 2002, Justice Thomas was a headline speaker at a CNP gathering outside Washington, D.C. In 2020, as Trump sought desperately to cling to power, the CNP was central to the messaging effort to try to frame the election as having been stolen; and while the Supreme Court repeatedly threw out Trump campaign efforts to overturn state results, Clarence Thomas came closer than other justices to entertaining sympathies for at least some of the Trump arguments, in particular vis-à-vis the nebulous notion that there had been widespread election fraud in November 2020.

His dissent in one of the Pennsylvania lawsuits around mail-in ballots borrowed heavily from the sorts of arguments developed by the CNP and related groupings.

Had Arizona’s legislators responded to pressure from the CNP and other right-wing groups by overturning their state’s election result, all hell would have broken loose. It would have triggered a constitutional crisis, would have likely precipitated mass protests, and would, almost certainly, have resulted in the Supreme Court eventually having to get involved in arbitrating the process.

Moreover, Clarence Thomas was the lone dissenter to the Supreme Court’s January order rejecting Trump’s bid to withhold documents from the House select committee investigating the January 6 attack. Maybe he did so out of genuine legal concern for precedents that would be set in the perennial power struggle between the executive and legislative branches. It’s at least possible, however, that he was concerned that his spouse’s intemperate emails and other exchanges would, if the documents were released, become part of the public record. Perhaps Ginni Thomas had mentioned to him just how involved she was in the efforts to challenge the results of the 2020 election.

It is surreal to think that, in a moment of national peril, the future of the country continues to hang, not on weighty legal arguments, but on at-home conversations between one U.S. Supreme Court justice and his far right activist spouse.