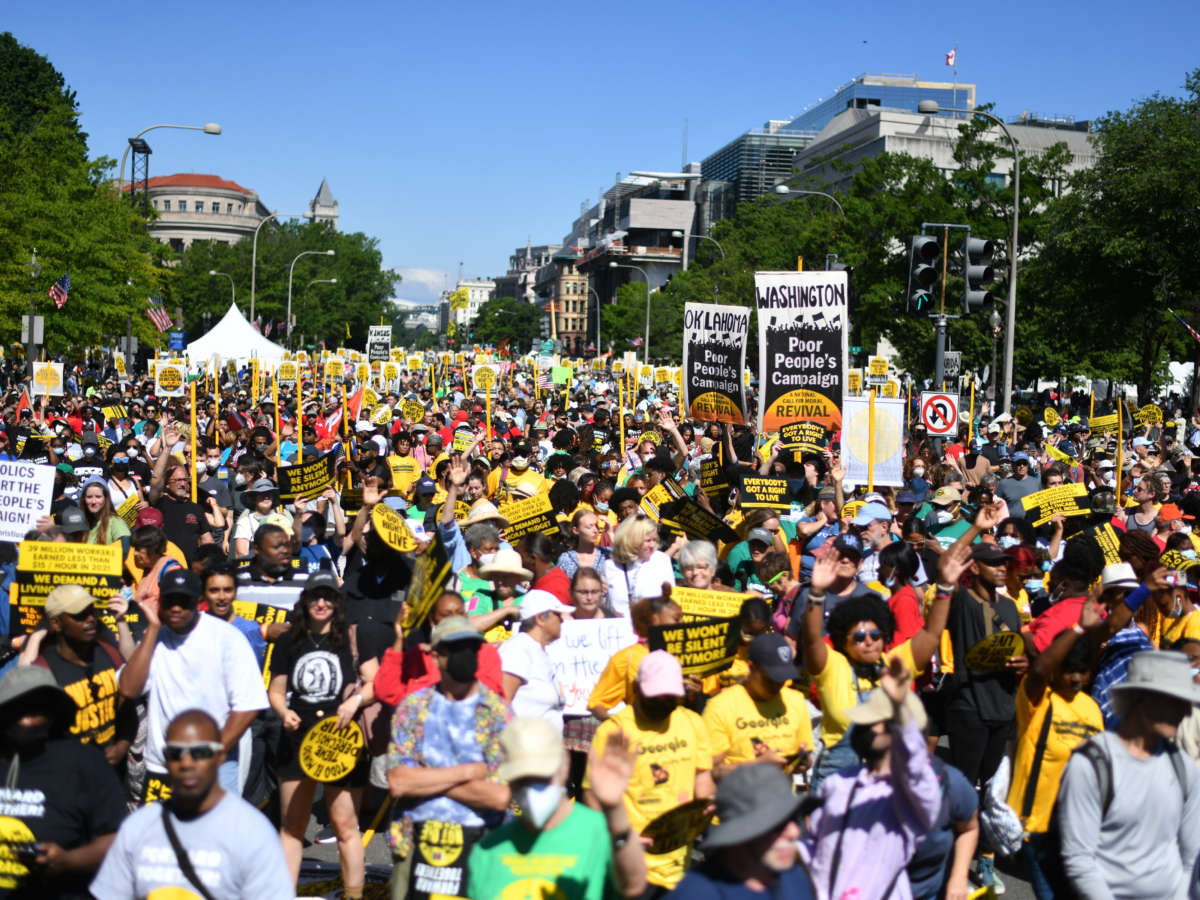 Led by the Poor People’s Campaign, advocacy groups and low-income individuals gathered in Washington, D.C. on Saturday to demand that policymakers “fight poverty, not the poor.”

“We are the 140 million poor and low-wealth people, standing together to declare we won’t be silent anymore,” said Rev. Dr. Liz Theoharis, co-chair of the campaign. “Poverty is a policy choice and we will hold our leaders accountable.”

Fellow campaign co-chair Bishop William Barber echoed that message in a speech at the Mass Poor People’s and Low-Wage Workers’ Assembly and Moral March on Washington, which drew thousands to the nation’s capital.

Barber declared that as long as essential workers are treated like they are “expendable” during a public health crisis, as long as federal lawmakers block pandemic relief for families, “as long as we have the stealing of native lands and unjust immigration,” and as long as millions of people nationwide face hunger and homelessness, “we won’t be silent anymore.”

“Let us be clear: We are not simply here for a day,” explained Barber, who also highlighted voter suppression efforts and the United States’ significant military spending. “This assembly is to declare the full commitment of a fusion coalition.”

“Now is the time for a Third Reconstruction. We are the rejected — who’ve been rejected by the politics of trickle-down economics and rejected by neoliberalism,” he continued, sharing the history of the first two reconstructions.

“This is a movement — until children are protected; until sick folk are healed; until low-wage workers are paid; until immigrants are treated fairly; until affordable housing is provided; until the atmosphere, the land, and the water are protected; until saving the world, and diplomacy, and living in peace is more important than blowing up the world,” he added, “we won’t be silent anymore.”

Participants in the event shared updates on social media with the hashtag #MoralAssembly2022:

We’re in Washington, DC at @UniteThePoor’s Moral March on Washington!

Today, and every day, we commit to fight for:

A living wage
Affordable healthcare and housing
Respect and dignity for all#MoralAssembly2022 #1u pic.twitter.com/BFC5PQaFWU

The event featured testimonies from people like Vivian Henry of the Minnesota Poor People’s Campaign, who spoke of her fears about losing her Medicaid due to politicians who don’t care whether she lives or dies.

“I’m here to say that if Congress can repeatedly afford to give corporate welfare to the rich, then Congress can afford universal healthcare for all so that people don’t go bankrupt or are forced to use a GoFundMe to cover medical expenses,” Henry said. “Scarcity is a massive lie!”

Poverty is violence! Proud to be here here with @UniteThePoor at the #PoorPeoplesCampaign Moral March to fight for economic justice. pic.twitter.com/dk1XldcSNb

Greenpeace USA is proud to be joined with activists and allies from across the country in Washington D.C. demanding justice for our workers and communities!

“My children are survivors just by being alive. It is not enough to be resilient and survive, it is our human right to grow and thrive,” declared Maya Torralba, an Indigenous mother who spoke at the assembly, followed by her daughter, Kateri Daffron.

Describing her experience growing up in Anadarko, Oklahoma, Daffron said that “although I moved away I am still in poverty. I cannot leave poverty. I am a 17-year-old child and my country has already failed me.”

“If you are silent about your pain, they’ll kill you and say you enjoyed it.”
― Zora Neale Hurston
.
.
.
At the March on Washington: Sharon Lavigne, Bobby Taylor, @brothercornelwest @berniceaking @revdrbarber@poorpeoplescampaign, and friends. pic.twitter.com/c0INsYwq9Q

Today, at #PoorPeoplesCampaign #MoralAssembly2022, I heard the stories of a powerful people determined to seek #justice and call this nation out on a check marked insufficient funds.

I am committed to the work. pic.twitter.com/KftEDG10C3

Kevin Queen, who traveled to the rally from Nebraska, told North Country Public Radio that “it’s kind of sickening to me that we’ve come to the capital of the richest country on the planet and we see homeless people in tunnels and living on the streets.”

“And so just to be able to be here and participate is an honor as well as something that’s very upsetting, because here we are, what, 60 years later, and we’re still marching for the poor — we still haven’t fixed this problem,” he added, referencing the 1963 March on Washington — where Rev. Dr. Martin Luther King Jr. delivered his “I Have a Dream” speech.

Ahead of the assembly, Barber said that people were coming to D.C. “to say not only do we need a moral reset… we represent 32% of the electorate now, poor people do, and 45% of the electorate in battleground states. And it’s time for that power to be organized, mobilized, and felt in every election throughout this country.”