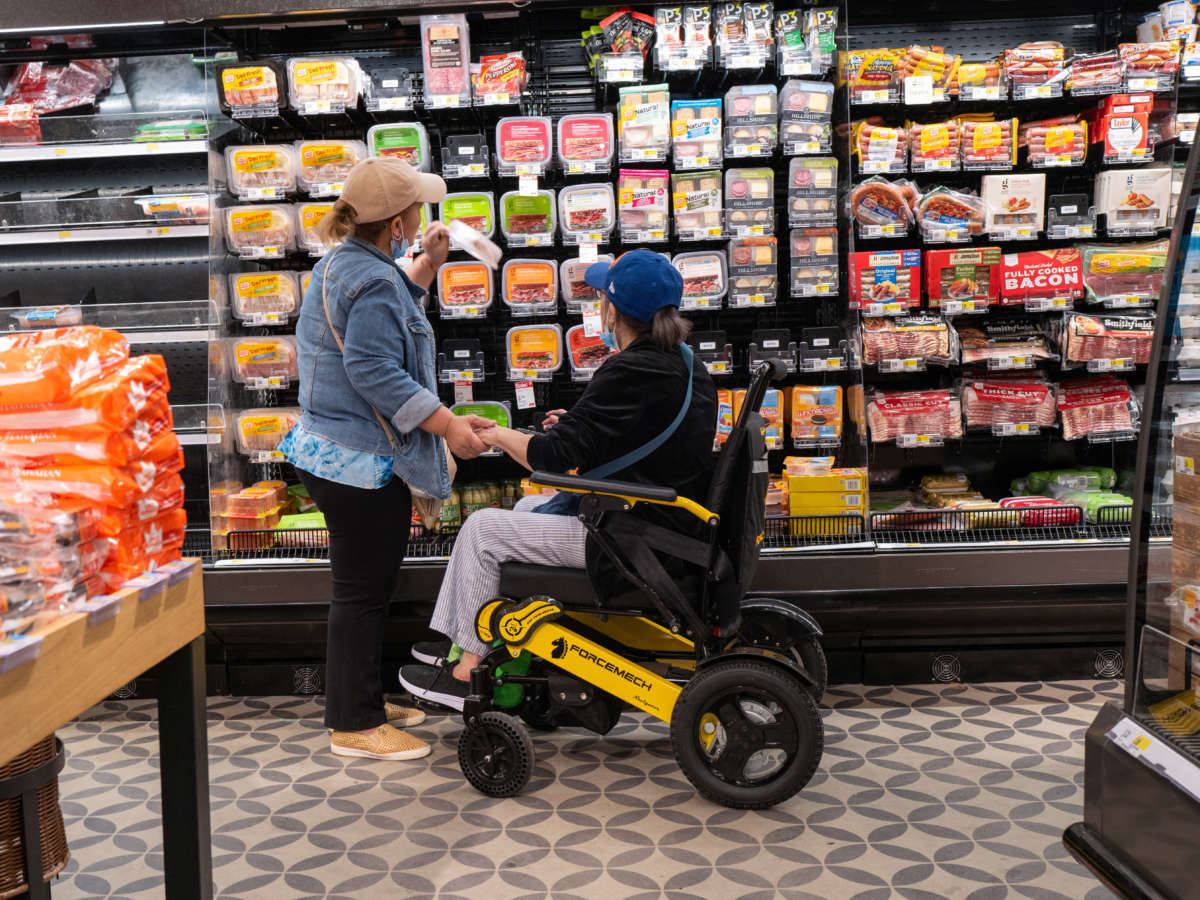 People deserve a fair share of the wealth we build in this country, but right now, Americans’ paychecks are being squeezed while corporate CEOs make windfall profits. Any plan that seeks to address inflation, like President Joe Biden’s recently published piece in the Wall Street Journal, should acknowledge how corporations and the very rich are using our pain to push a false narrative about how we got here. Whenever they can, corporations blame workers who organize against unsafe, unfair workplaces, and voters who demand the public investments we need.

Let’s be clear about what’s really happening here: Prices are rising faster than wages, and the wages paid by corporations are not keeping up with rising productivity, nor is the federal government making the needed public investments to prevent serious economic hardship for the working class. While tens of millions of people were forced into poverty during the pandemic, billionaires got $1 trillion richer last year. And, as the recent report from People’s Action and Demos showed, corporations just spent millions of dollars to kill the Build Back Better agenda, which would have lowered costs for everyday people.

People do not have enough money because corporations and the very rich want it that way — and their propaganda blitz about inflation is designed to keep it that way. To truly understand their strategy, let’s take a step back.

When former President Ronald Reagan and the corporate forces behind him wanted to end the era of the New Deal, which dragged this country out of the Great Depression and lifted millions out of poverty, he leaned on fears about inflation. “Inflation,” he said, “is as violent as a mugger, as frightening as an armed robber, and as deadly as a hit man.”

But inflation is about rising costs and who bears them, and while he was activating people’s fear-based mentalities about it with violent imagery, he and his allies were destroying the public structures that kept costs down for everyday people and attacking the main institution — unions — that defended worker pay and working conditions.

​​He frequently misled audiences about the relationship between inflation, taxes, and budget deficits. The basic frame he brought to bear was one of discipline — or, austerity and authoritarianism. By terrifying people about inflation, enabling the deeper exploitation of workers, and scaring the public away from public investments, Reagan ushered in a toxic era of neoliberalism that led directly to the crises tearing our country apart today.

You can see this squeeze play operating in politics now, from the factory floor to the halls of Congress. When PepsiCo announced billions of dollars in payouts and stock buybacks in its second-quarter earnings call for 2021, the company also announced that it intended to increase “productivity” at its facilities — facilities at which workers had just gone on strike for being forced to work “suicide shifts,” or schedules with only eight hours off between shifts and 84-hour work weeks with no time off. One worker published a public letter days before the earnings call, in which she described one employee dropping dead at the plant in question only to have her supervisors move the body and slot someone else in to maintain that productivity.

By enabling the deeper exploitation of workers and scaring the public away from public investments, Reagan ushered in a toxic era of neoliberalism that led directly to the crises tearing our country apart today.

In the same call, PepsiCo’s CEO, who took home more than $21 million in 2020, announced the company was raising prices.

Meatpacking corporations made similar moves, including Tyson Foods. Last January, Tyson had to agree to a $221 million price-fixing settlement, but in the following year, their net profit soared by 47 percent while they gave out $700 million to shareholders. A few months ago, Tyson’s CEO’s credited rising meat prices for doubling the company’s profit.

So, what was happening on the factory floor while Tyson was raking in these profits and jacking up food prices?

In 2020, Tyson’s legal department drafted an executive order for the Trump administration to “insulate meatpacking companies from oversight by state and local health departments and provide legal protection against lawsuits for worker illnesses and deaths,” according to a new report from the House Select Committee on the Coronavirus Crisis. According to the committee, the meatpacking giant made “baseless” claims of an imminent meat shortage to justify keeping workers in their facilities as the pandemic took off, putting consumers and workers at risk. The result? During the first year of the pandemic, Tyson saw roughly 30,000 employee infections and 151 employee deaths, the worst among major meatpackers.

At the same time, this corporation and others like it were working through their front groups like the U.S. Chamber of Commerce to scare people away from the investments and reforms we need to thrive.

The same folks who will work a person until they collapse and die on the factory floor will certainly stop at nothing, including misleading us about the source of our pain, to keep profits sky-high.

The organization I work for, People’s Action, has been on the front lines of the battle to win the Build Back Better plan, before it was killed by a corporate Democrat. It has been a bruising fight between everyday people on the one hand and entrenched corporate power on the other. Our member organizations from West Virginia to Arizona and a bunch in between hosted direct actions exposing corporations for their behind-the-scenes puppeteering during the Build Back Better battle. We won some real victories, like cutting child poverty in half through the American Rescue Plan’s child tax credit and rejoining the Paris Climate Agreement, but corporations are doing everything they can to stop this kind of legislation.

The same folks who will work a person until they collapse and die on the factory floor will certainly stop at nothing, including misleading us about the source of our pain, to keep profits sky-high. That’s exactly what they are doing when they spin rising prices at the grocery store and the gas pump as end-of-the-world economics. They want you to believe it’s your fault, not theirs, because you had the gall to elect leaders who would lower costs for you for once instead of the rich.

When corporations and their shareholders make record profits, when their CEOs bring home $21 million and some change every year, when their stock prices break records — when all of these things are true and they still raise prices and try to force their employees to deliver “higher productivity,” to work until they break — the problem is not that we demanded that our elected officials pass the reforms and investments that we need to survive. The problem is greed.