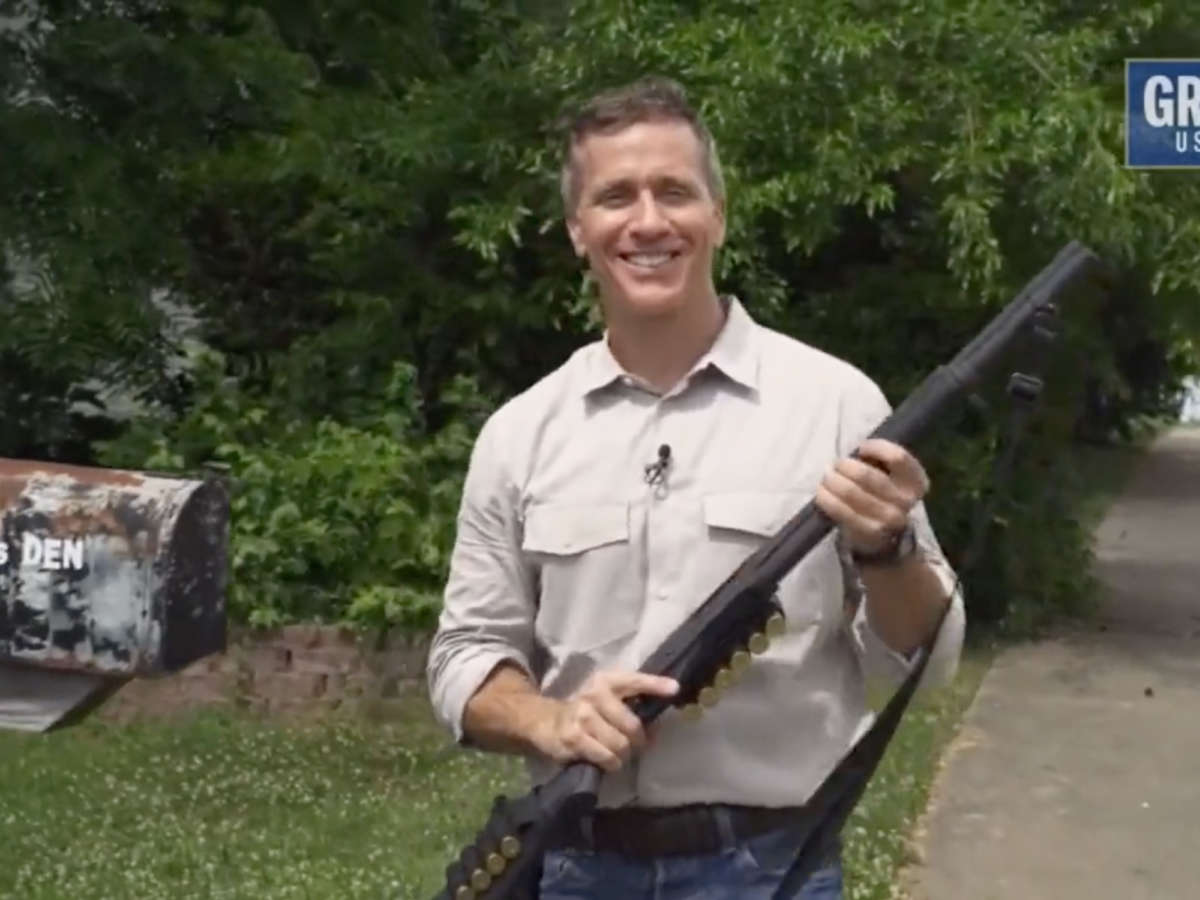 Republican Senate candidate Eric Greitens is facing backlash after airing a political ad that depicts him hunting members of his party who are not “true” Republicans.

In the commercial, which isn’t airing on television but is being shared widely online, Greitens disparages “RINOs” — an acronym for “Republican In Name Only,” which has been used by pro-Trump Republicans in the past couple of years to refer to party members who disagree with or criticize the former president.

Holding a shotgun, and accompanied by several other individuals clad in commando-style camouflage uniforms and holding rifles, Greitens is shown walking down a sidewalk saying that he’s going “RINO hunting.”

In the following scenes, Greitens and his entourage burst into a home and fire off a flash-bang grenade, mimicking a military or SWAT Team raid. Greitens walks toward the camera and invites viewers to “join the MAGA crew” and to “get a RINO hunting permit.”

Greitens previously served briefly as governor of Missouri until 2018, when it was discovered he had an extramarital affair. He was later charged with abusing and blackmailing the person in that relationship. Last year Greitens announced that he’d make a return to politics by running for an open U.S. Senate seat in the state.

Users on social media and elected officials have condemned the ad as promoting violence against political opponents. Greitens has responded to those complaints by claiming that “there [isn’t] a real person in Missouri who thinks about it literally,” and that “faux outrage” against the ad is coming from “leftists and RINOS.”

Despite these claims, at least one Twitter user has already shared the ad. “We’ve got our permit and we’re coming for you,” the user wrote in their message.

In response to the sharing of the commercial, Facebook announced that it would remove Greitens’s ad for “violating our policies prohibiting violence and incitement.”

Many have spoken out against the advertisement. Greitens is “desperately seeking an endorsement from Donald Trump” in a “cringe-inducing way,” MSNBC host Chris Hayes said on Monday night.

“It is both disgusting and not surprising that Greitens released this dangerous, irresponsible, and reckless ad,” Missouri Democrats Executive Director Randy Dunn said in a statement calling on the GOP to denounce the violent rhetoric.

A number of Missouri Republican lawmakers have condemned the ad, including State Senate Majority Leader Caleb Rowden, who said that he reached out to law enforcement about Greitens’s ad.

“We have been in contact with the Missouri Highway Patrol and hope that former Gov. Greitens finds the help he needs,” Rowden said.

Some were critical of that response for improperly placing blame on mental illness and not on Greitens, who is the latest in a long line of Republicans who have increased their use of violent rhetoric over the past several months.

“Eric Greitens isn’t mentally ill,” said Shannon Watts, founder of Moms Demand Action. “He [is] an abuser, a deviant, a bully, a misogynist, an extremist, a danger to democracy, a toxic blight on humanity, a threat to anyone who disagrees with him, and a corrupt and power-hungry politician. Those are all personal choices.”