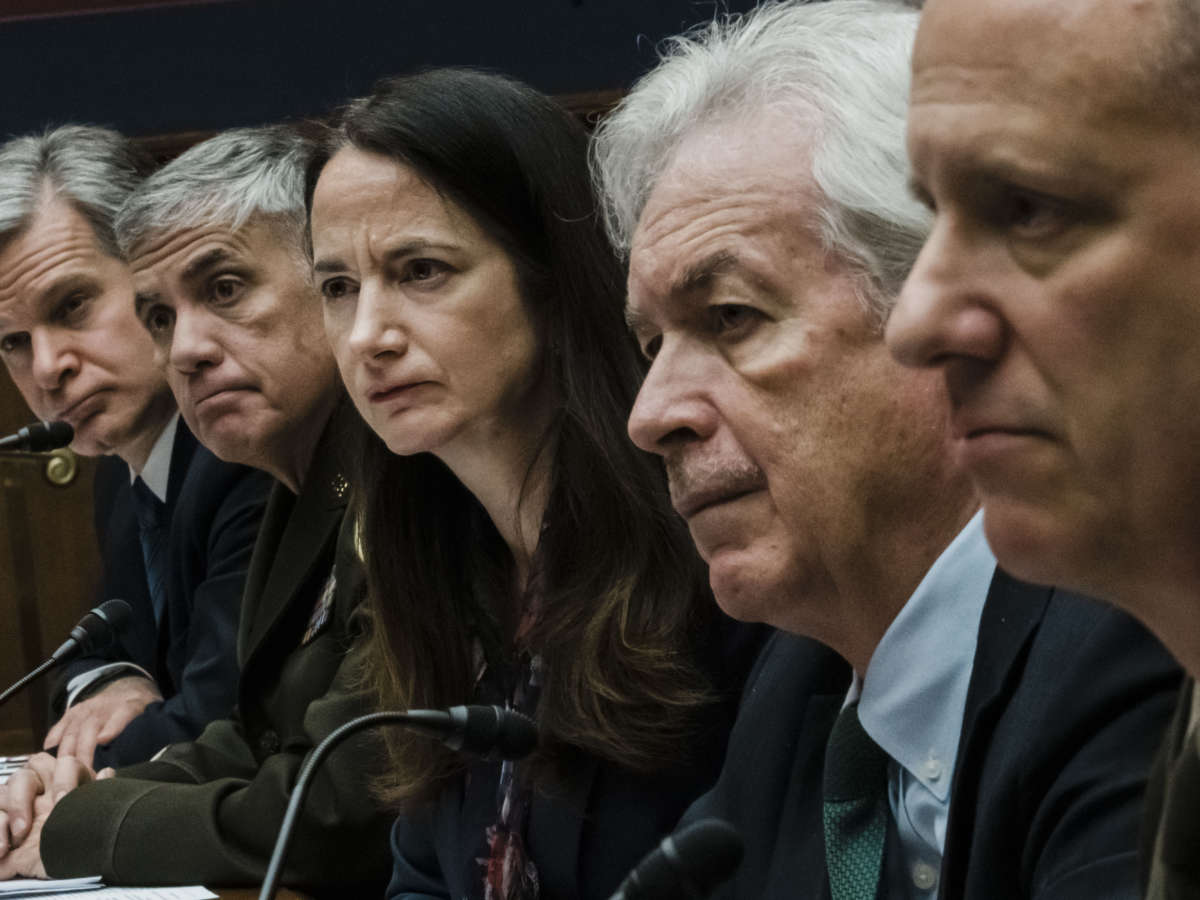 Such statements harmonize with the prevailing soundscape. The standard script asserts that the United States is powerful and besieged — mighty but always menaced — the world’s leading light yet beset by hostile nations and other sinister forces aiming to undermine the USA’s rightful dominance of the globe.

A fortress mindset feeds the U.S. government’s huge “defense” budget — which is higher than the military budgets of the next 10 countries combined — while the Pentagon maintains about 750 military bases overseas. But victimology is among Washington’s official poses, in sync with a core belief that the United States is at the center of the world’s importance and must therefore police the world to the best of its capacity.

In recent decades, U.S. military power has faced new challenges to retain unipolar leverage over the planet in the wake of the Soviet Union’s collapse. (Heavy is Uncle Sam’s head that wears the crown.) Along with the fresh challenges came incentives to update the political lexicon for rationalizing red-white-and-blue militarism.

Ever since Secretary of State Madeleine Albright gave the motto its bigtime national debut in February 1998 on NBC’s “Today Show”, efforts to portray the U.S. as an “indispensable nation” became familiar rhetoric — or at least a renewed conceptual frame — for U.S. interventionism. “If we have to use force,” she said, “it is because we are America; we are the indispensable nation. We stand tall and we see further than other countries into the future, and we see the danger here to all of us.”

In 2022, such verbiage would easily fit onto teleprompters at the highest levels of the U.S. government. The appeal of such words has never waned among mass media and officials in Washington, as the United States simultaneously touts itself as the main virtuous star on the world stage and a country simply trying to protect itself from malevolence.

“The Russians are trying to get us to tear ourselves apart.”

This theme remains an establishment favorite. It dodges the grim realities of U.S. society — completely unrelated to Russia — such as longstanding and ongoing conflicts due to racism, misogyny, income inequality, corporate power, oligarchy, and other structural injustices. The right-wing menace to human decency and democracy in the United States is homegrown, as the January 6 insurrection at the Capitol made chillingly clear.

This month, while the horrific and unjustified Russian war in Ukraine has continued, the United States has persisted with massive shipments of weapons to the Ukrainian government. Meanwhile, official interest in genuine diplomacy has been somewhere between scant and nonexistent. One of the few stirrings toward rationality from Capitol Hill came early this month when Rep. Ro Khanna told The Washington Post: “People don’t want to see a resigned attitude that this is just going to go on as long as it’s going to go on. What is the plan on the diplomatic front?” Several weeks later, the Biden administration is still indicating no interest in any such plan.

“The Chinese are trying to manage our decline.”

Leaders in Washington don’t want the sun to set on the U.S. empire, but China and many other nations have other ideas. This week, news of Nancy Pelosi’s intention to visit Taiwan in August was greeted with cheers from the editorial board of the Wall Street Journal, which wrote that she deserved “kudos” for planning “what would be the first trip to the island democracy by a House Speaker in 25 years.”

The right-wing menace to human decency and democracy in the United States is homegrown.

At midweek, President Biden expressed concern about the planned trip, saying: “I think that the military thinks it’s not a good idea right now. But I don’t know what the status of it is.” However, his team’s overall approach is confrontational, risking a potentially catastrophic war with nuclear-armed China. Despite dire warnings from many analysts, the U.S. geopolitical stance toward China is reflexively and dangerously zero-sum.

“The Iranians are trying to get us to go away.”

Iran’s government adhered to the nuclear deal enacted in 2015, formally known as the Joint Comprehensive Plan of Action (JCPOA). But the Trump administration pulled out of the pact. Rather than swiftly move to rejoin it, the Biden administration has dithered and thrown roadblocks.

Two weeks ago, Secretary of State Antony Blinken disingenuously announced: “We are imposing sanctions on Iranian petroleum and petrochemical producers, transporters, and front companies. Absent a commitment from Iran to return to the JCPOA, an outcome we continue to pursue, we will keep using our authorities to target Iran’s exports of energy products.”

In response, Quincy Institute Executive Vice President Trita Parsi tweeted: “Biden is continuing and embracing Trump’s max pressure policy, while expecting a different result. All of this could have been avoided if Biden just returned to the JCPOA via Exe order” — with an executive order, as he did to reverse President Trump’s withdrawal of the U.S. from the Paris climate accord and the World Health Organization.

What continues — with countless instances of repetition compulsion — is the proclaimed vision of the United States of America leading the charge against the world’s badness. Beneath the veneer of goodness, however, systematic hypocrisy and opportunistic cruelty persist on a massive scale.

A case in point is Biden’s recent journey to the Middle East: The presidential trip’s prominent features included fist-bumping with a Saudi monarch whose government has caused a quarter-million deaths and vast misery with its war on Yemen, and voicing fervent support for the Israeli government as it continues to impose apartheid on the Palestinian people.

Leaders of the U.S. government never tire of reasserting their commitment to human rights and democracy. At the same time, they insist that an inexhaustible supply of adversaries is bent on harming the United States, which must not run away from forceful engagement with the world. But the actual U.S. agenda is to run the world.