We Can’t Build Real Power by Defending Democrats. We Must Organize From Below. 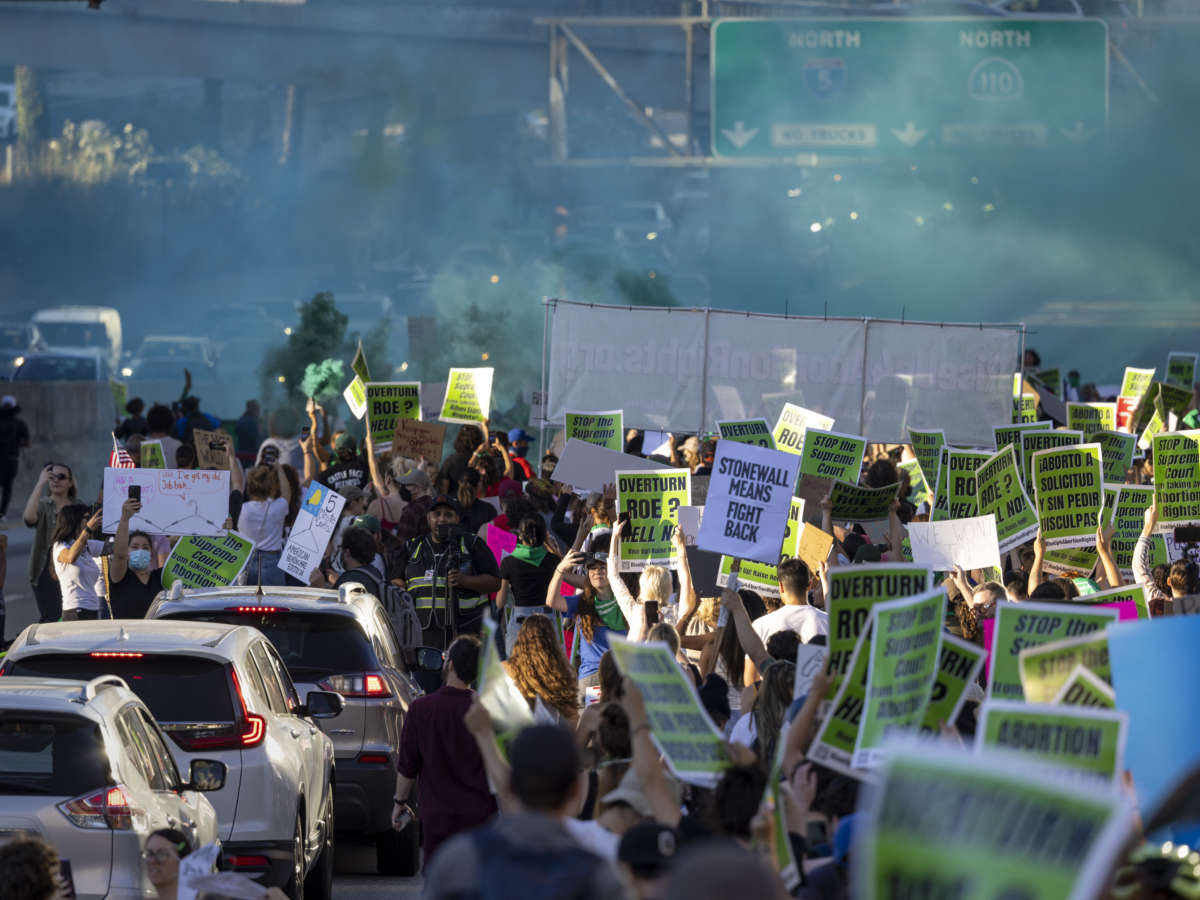 The United States Constitution is failing: Its anti-democratic structures are creating a crisis of legitimacy and an inability to address a cascade of social crises. This is a problem endemic to liberal democracies, as the contradictions between political democracy on the one hand, and the tyranny of capital and ruling class control of politics on the other become heightened.

Part of the crisis we face is the disjuncture between the sense of horror and urgency from the events of the last months and the gross inaction from politicians, particularly Democrats. Less than two weeks after a white supremacist attack on Black shoppers in Buffalo, New York, another gunman murdered children and their teachers in a school in Uvalde, Texas.

In the same month as these mass murders, a leaked Supreme Court decision from an abortion case in Mississippi threatened to undo 50 years of legal precedent and end the right to abortion. As June drew to a close, what many had once considered an impossibility happened as Roe v. Wade was officially overturned. The decision was all the more jarring for its disregard of the health of millions who can become pregnant and the basic right to decide one’s own future.

In the same week that Roe was overturned in the Dobbs v. Jackson Women’s Health Organization decision, shocking testimony at the January 6 congressional hearings described former President Donald Trump’s attempts to join the insurrection at the Capitol and confirmed that he knew that his supporters were armed and calling for the death of the vice president.

All this is against the backdrop of the ongoing COVID-19 pandemic; at least six natural disasters in the last month from floods, to droughts and heat waves driven by climate change; inflation stemming from the war in Ukraine and out-of-control corporate profits; an economy teetering on the edge of recession; an urban crisis in housing prices and homelessness, and others.

Meanwhile, the party in power is doing nothing substantial to address this onslaught. Repeated inaction on the key issues of our times has led to a congressional approval rating of just 16 percent as of June. The Supreme Court is likewise suffering a credibility crisis on a scale unseen since its 1857 ruling in the Dred Scott v. Sandford case, which reversed decades of precedent around Black citizenship.

This problem is structural; the Constitution was designed to limit democratic participation from the average person. The fundamentally anti-democratic political structures of the Senate, the Electoral College, and the Supreme Court have given outsized influence to rural conservative voters and the rich. It’s not just a bug; it’s baked into the design of the U.S. political system. Because of anti-democratic measures like the filibuster, even with Democratic control of both houses of Congress, the majority party has been unable to act. On top of this, the Supreme Court has now been captured by a far right movement unconcerned with broad social legitimacy and the niceties of democratic procedure.

At the presidential level, Joe Biden’s dithering in the face of historic circumstances is leading to a crisis of legitimacy not just for his administration, but for the very structure of constitutional governance. With these mounting failures, U.S. political discourse is increasingly shaped by the recognition of intractable contradictions at the heart of our Constitution.

For activists and organizers of the left, we need to take stock of this moment if we hope to survive the coming decades and move history in a more humane direction. While the crisis of legitimacy is growing, there is currently no mass organized force from the left that is addressing all of these concerns. Some continue to argue for a U.S. social democracy to be achieved through the very political structures that are failing all around us. Still other longtime voices on the left cling to a strategy of backing the Democrats.

At present, the most vocal and visible groups that point to these political failures and offer a “revolutionary” alternative, if odious for its inhumanity, are on the far right. The January 6 insurrection and the degree to which Trump continues to hold legitimacy speaks to the deep desire for a radical break with democracy on the right.

It is notable that the far right is turning away from seeing itself as extensions of the state and defenders of the established order to being in conflict with the “deep state” and liberal elites. In addition to January 6 itself, far right militia membership grew after the Capitol insurrection and groups like the Proud Boys have infiltrated the Republican Party in Miami, Florida. Recently, the far right attacked public libraries and led violent marches in liberal bastions like Boston and Philadelphia.

On the other hand, the left lacks the organized structures and political articulation to counter the growth of the right in U.S. politics. Further, we lack the ability to articulate an alternative to the current direction when so many on the left conflate ideas of pragmatism and political power with defense of a decaying political order.

In the short term, the prospects for change in a positive direction are grim, but it doesn’t have to be this way. With even a little organization, coordination and consistency from the sections of the left that adhere to a vision of radical social change, the possibility of pushing history in a liberatory direction remains.

While most feel the aforementioned crises acutely, political leaders remain aloof from the concerns of regular people. In the face of the unprecedented attacks on the government from the far right, the violence against schoolchildren and Black shoppers, the climate crisis and the reversal of Roe, the Biden administration and Democrats have articulated no political strategy other than more calls to fundraise and vote.

For example, in a recent feature on California Sen. Dianne Feinstein published by The Cut, the senator asked the periodical’s readers to trust her on the ability of establishment Democrats to act decisively. Meanwhile, establishment Democrats repeatedly appeals for the unquestioning trust of their constituents, while behind the scenes they continue to block meaningful reform. Famously, former President Barack Obama’s only intervention in the 2020 Democratic primary elections was to block Vermont Sen. Bernie Sanders from gaining the party’s presidential nomination.

More recently, Vice President Kamala Harris responded “Do what?” when a CNN reporter pressed her about voter demands to act boldly in the face of mounting crises. Now a whopping 64 percent of Democratic voters oppose a second term for President Biden. Even Republicans have been shocked at the Democrats’ inability to take meaningful action.

If this weren’t bad enough, some voices on the left continue to call for popular movements to support the Democrats, even in the face of the party’s historical failures to act. They offer “lesser evil” arguments and a strategy of “building a left pole” (aka “popular front”) that never emerges — all while our historical trajectory slides toward fascism and climate catastrophe.

Other voices continue to double down on this strategy, but with an emphasis on more progressive candidates. Some think a winning strategy is for the left to support a Sanders candidacy in 2024, a strategy that has been tried and failed twice. There have been some victories — figures like New York Rep. Alexandria Ocasio-Cortez are notable — but nothing approaching the urgency of change needed given the scale of the crises that we face.

Hope Comes From Below

The need for a radical mass movement from the left to challenge and transform the crises is more necessary than ever. Even a modicum of organized left presence has the potential to change this dynamic very quickly. For instance, by organizing mass demonstrations for abortion rights or blockades of fossil fuel infrastructure, unions, student groups, and social organizations could increase the cost on elites for these political failures and press for the urgency of change. It is possible to build these kinds of transformative movements. But so long as those taking the mantle of left strategists direct us to the Democrats and support for a crumbling system, we will continue to be mired in this political and historical morass.

There are other possible strategies and sources of inspiration. We can learn from movements around the world that push in more positive, hopeful and humane future directions. In Chile, for example, disruptive street-focused social protests and the organizations that made them happen are involved in creating a new constitution in that country. Feminist movements transformed into a mass uprising against neoliberalism and state violence, forcing the country in new directions and away from the legacies of its U.S.-supported dictatorship toward a greater democratic (though still capitalist) order.

In Colombia, a nationwide general strike in 2021 against proposed neoliberal reforms shut down the country, halted the proposals and forced government ministers to resign. The changes from President Iván Duque Márquez would have increased consumer taxes, passing the cost of social programs onto the poor, and privatized parts of the nation’s health care system, all at the height of the COVID crisis there. When protesters were met with brutal police violence, including sexual assaults, students, labor unions and Indigenous movements came together to form a national strike committee. Over the month of May and into that summer through a national strike and ongoing resistance, they forced the government to back down and change course in the national crisis.

In the U.S., we have seen similar victories even against very difficult odds. In West Virginia in 2018, a teacher strike sparked a movement. Gov. Jim Justice initially offered only 1 percent raises for teachers statewide, and threatened their health care funding. Even though the strike was illegal, teachers organized face to face and over social media platforms to shut down every school district in the state. After some negotiations, unions tried to get teachers back to work. They refused, holding out another whole week for a 5 percent raise that they ultimately won. This sparked a nationwide teacher strike wave in 2018, a midterm election year, which changed the dynamics of the election and contributed to a minor blue wave in congressional representation. Teachers in Republican controlled states like West Virginia, Arizona, Oklahoma, and North Carolina struck to demand better pay, better working conditions and improvements in public education for their students.

We can contribute to these gains. By focusing on mass action in the streets, neighborhoods and workplaces, on disruptive social protests that put the hurt on the ruling class and their two parties, and on building the types of organizations that can foster and sustain popular power from the bottom for the long haul, we can move in more positive directions very quickly. It is important to remember that so long as capitalism, white supremacy, patriarchy and imperialism are the basis of the social order, we won’t see fundamental change. Instead, revolutionary struggle against these structures, and the legal system that protects them, is necessary.

But this type of change will require a reckoning with our failed strategies and a recognition that we live in a political system that is breaking under the weight of its contradictions. The constitutional order of the 18th century was built specifically to limit popular democracy and preserve the power of the wealthy slave-holding class. We are reaping the bitter fruit of that system now in 2022.

It would be wrong to say we face a crisis on the scale of the Civil War; our crisis is different, but it is no less acute. So long as our strategies assume the legitimacy of our current order, we will continue our slow slide to fascism, climate crisis and social chaos. To change the course of history, we must break with these traditions, build a movement rooted in popular power from below that can end these structures that oppress us and create a future worth fighting for.