Bill Russell Has Died, But His Legacies in Basketball and Racial Justice Live On 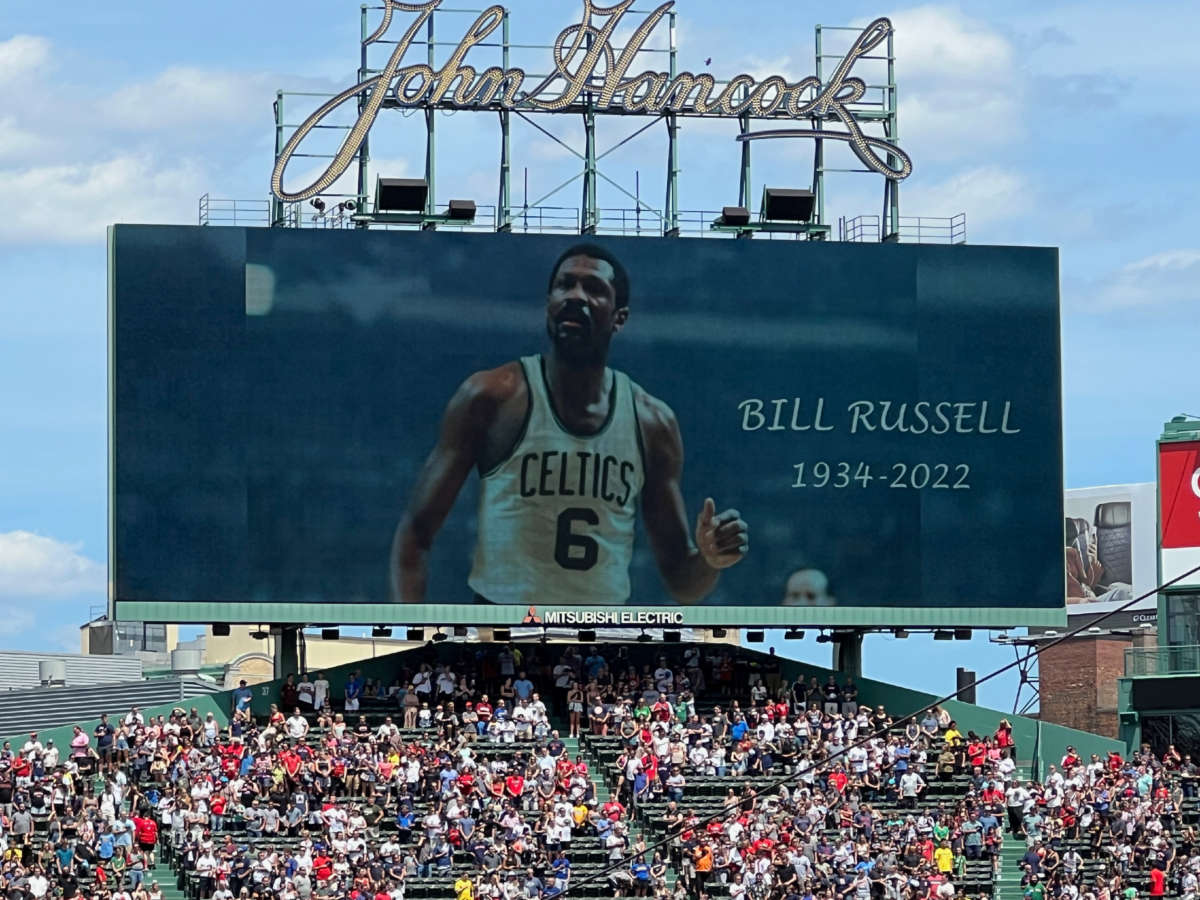 Bill Russell, who passed away on Sunday at the age of 88, was the personification of greatness. He did not need the context of basketball to earn this label, but there is no escaping his status in that realm. As far as winning goes, Russell is without peer. He brought two NCAA championships to the University of San Francisco, defeated the Soviet Union to win Olympic gold in 1956, won 11 NBA championships as a Boston Celtics player and as a player/coach — the first Black coach in professional sports — including a preposterous run of eight title victories in a row.

To place this in a modern context, consider the mind-bending run of success Boston-area teams have enjoyed since 2001. The Patriots won six Super Bowls, the Red Sox won four World Series, the Bruins won the Stanley Cup and the Celtics won the NBA championship. That’s 12 titles. From college to coaching, Bill Russell won 14 titles, two more than that run of all four professional Boston sports teams combined. Though not a natural shooter like his teammate Bob Cousey – Russell averaged 19 points a game throughout his career – he was one of the best defenders, if not the best defender, of all time. He is, according to Ray Ratto of Defector, “the answer to every historical basketball question ever posed.”

Yet Bill Russell was so much more than a man who excelled at putting an inflated ball through an iron ring, or more to the point, who excelled at preventing others from doing so. He performed these feats of athletic prowess in an age when Jim Crow was alive, well and bleeding on the books. Russell was a civil rights activist from the beginning, one of the very first in the realm of pro sports. When the Celtics played in cities that enforced Jim Crow laws, he organized game boycotts conducted by every Black player on both teams, and they all sat. He stood with Muhammad Ali during the boxer’s own time in America’s racist crucible, and marched with Martin Luther King, Jr. His very presence was a righteous demand for social justice.

“From the time he was a young man to his death at age 88 on Sunday, Russell was a civil rights activist who consistently used his platform as a celebrity athlete to confront racism, no matter whom it alienated or what it did to his public popularity,” writes Sopan Deb for The New York Times. “And he was one of the first to do so.”

Nowhere was Russell more viciously confronted with mass societal racism than in the city where he played, and the fact of his greatness also serves to underscore a grim, decades-long struggle for recognition in a city where, for far too long, all the heroes were white. The clearest example of this came with a massive construction project some 30 years ago, when the question of naming rights became a Rorschach test the city once again failed.

For the first half of the 1990s, a swath of Boston’s downtown was literally transformed into 40 miles of bad road. The so-called “Big Dig” – a massive highway improvement effort dubbed at the time the “largest public works project in human history” – had cored out the center of town and left the remaining highway infrastructure looking like something that had been dropped there from space.

Many years and billions of dollars later, the worthiness of the effort is still hotly debated in the city, but three jewels did emerge from the dust and confusion: a deeply-needed tunnel directly connecting the western half of the city to the airport, a gorgeous white suspension bridge over the Charles River, and a lovely greenway constructed on the footprint of the old I-93 overpass that had stood for years like Mordor’s wall between Faneuil Hall and the harbor waterfront.

When he requested and reviewed his FBI file, Russell found himself repeatedly referred to as “an arrogant Negro who won’t sign autographs for white children.”

When it became time to name these things, all sorts of suggestions were bandied about … and for each one, there was a chorus of voices asking, “Can we name this for Bill Russell?” The answer, times three, was no: The tunnel was named for Ted Williams, who never won a championship for the Red Sox; the bridge was named for Leonard Paul “Lenny” Zakim, a civil rights advocate with the Anti-Defamation League (ADL); the greenspace was named for Rose Kennedy, the matriarch of the Kennedy political dynasty. Kennedy’s senator son, Edward, practically built the greenspace with his bare hands, for his mom.

The decisions did not sit well. Tommy Heinsohn, Russell’s teammate for nine years, was blunt in relating his opinion to Sports Illustrated’s Frank Deford in 2014. “Look,” said Heinsohn, “all I know is, the guy won two NCAA championships, 50-some college games in a row, the Olympics, then he came to Boston and won 11 championships in 13 years, and they named a fucking tunnel after Ted Williams.”

In 2013, Bill Russell got a statue in City Hall Plaza. Fittingly, it depicts him preparing to unselfishly pass the ball to a teammate. There were other moments of rapprochement between Russell and the city over the years, most vividly his appearance at the 1999 ceremony for the re-retirement of his jersey number (he had skipped the first one), but old scars still burned to the end. The Washington Post reports:

Despite his success with the Celtics — the team had never won a championship before his arrival — Mr. Russell did not receive local business endorsements and found himself shut out of exclusive neighborhoods when he was looking to buy a house. In 1968, his suburban Boston home was broken into and ransacked. Racial epithets were written on the walls, and feces were left on his bed.

“It had all varieties, old and new, and in their most virulent form,” he wrote in [his 1979 memoir] “Second Wind.” “The city had corrupt, city hall-crony racists, brick-throwing, send-’em-back-to-Africa racists, and in the university areas phony radical-chic racists.… Other than that, I liked the city.”

Boston still wrestles today with the reality of its ingrained racism. Throughout the 1960s and 1970s, activists shone a spotlight on that racism, with the rise of the civil rights movement and riots spawned by enforced busing. Racist violence and blatant bigotry was on full display, too. As the most visible Black man in Boston, Russell often found himself at the receiving end of such vitriol, all too often from fans in the stands at the Boston Garden.

Eventually, Russell came to occupy a mental space that allowed him to continue with the game: As far as he was concerned, he was playing for his teammates, and not for the louts in the stands. So far as I know, he never signed one autograph, preferring instead a few shared words and a handshake. When he requested and reviewed his FBI file, Russell found himself disparaged for not signing “autographs for white children.”

The combined weight of all this – the athletic pressures, the hatred and racism, the venom from fans wearing your colors in your building, the assaults on your home – could have easily undone a lesser mortal. No such fate awaited Bill Russell, in no small part because over and under and around and through that heart of greatness was a joy that lit up his face.

You have never, ever, not once heard anything quite so purely happy as the sound of Bill Russel laughing his ass off. When his laughter was loosed from that towering body, it sounded like God sent a fistful of diamonds down an infinite marble staircase, and he did it all the time. His laughter stopped conversations, stopped traffic, stopped time … and afforded the exclamation point for the rare moment when he flexed. Not long ago, he shared a stage with several of the NBA’s most prominent “big men.” He sized them up one by one, leaned in, and whispered, “I would kick your ass.” And he laughed, and laughed, because he knew he was right.

About all of it.

In the words of Maya Angelou, “And when great souls die, after a period peace blooms, slowly and always irregularly. Spaces fill with a kind of soothing electric vibration. Our senses, restored, never to be the same, whisper to us. They existed. They existed. We can be. Be and be better. For they existed.”