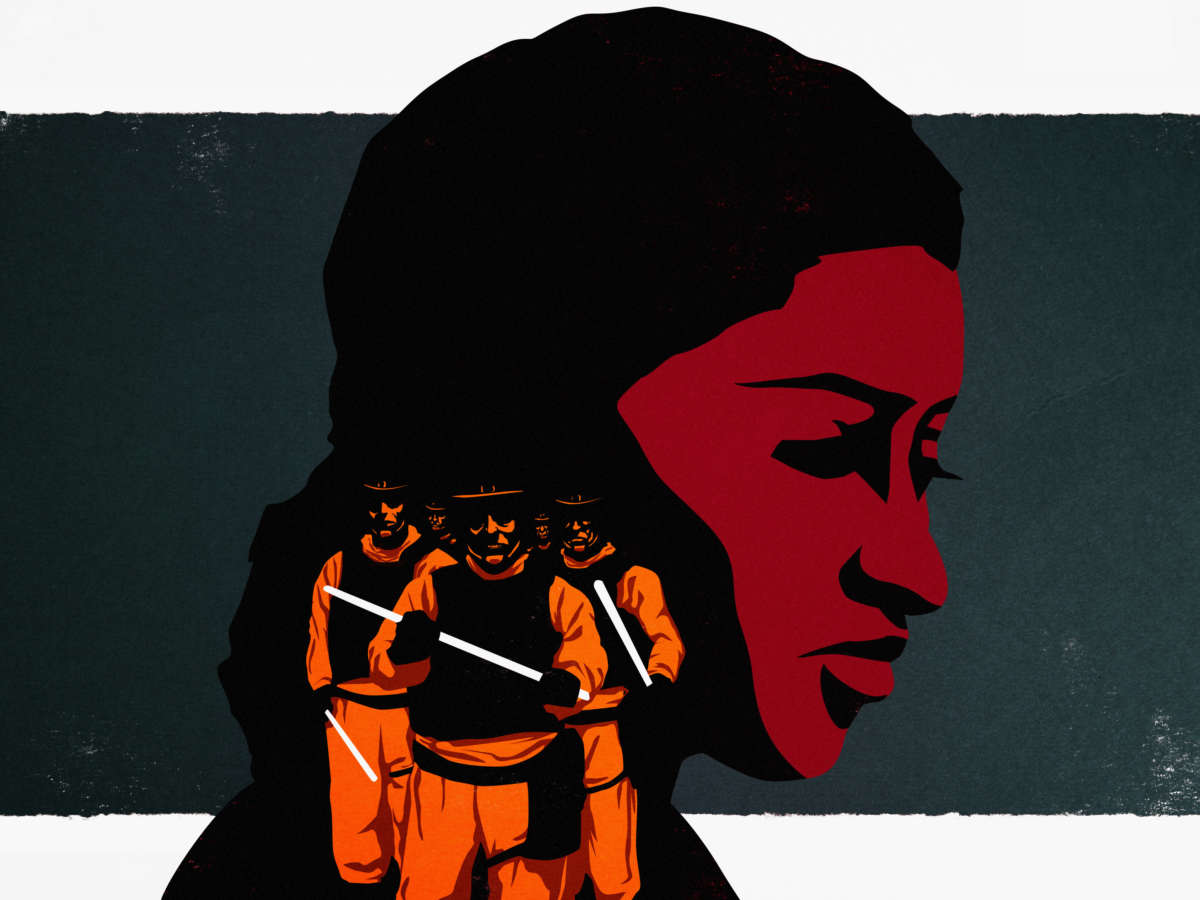 “It was a long, gruesome day, let me tell you,” Veela Morris recalls. “We’re women, so it was really bad for us. Nothing like that had ever happened to me.”

Anyone who has done time in Illinois prisons is aware of the “Orange Crush” — a militarized “tactical team” that in practice is a band of prison guards who dress in orange jumpsuits, wear riot gear, helmets, armored vests and military boots, and carry batons, shields and canisters of pepper spray on their belts.

Other state prison systems have tactical teams, but the Orange Crush is unique to Illinois and has a special reputation for brutality, as the name suggests. “I had heard of them,” said Morris, who spent 20 months in prison in 2010-2011. “But I had never had any dealings with them.”

“It was shocking because we were sleeping,” she recalled. “They were banging on the metal bars of the bunks with their batons, yelling at us, calling us all kinds of horrible names. I couldn’t believe it; it was like I was in a dream.”

Morris now lives on Chicago’s South Side where her family operates a family business — Harold’s Chicken Shack, a popular local chain — and has three children. She was one of the plaintiffs in a lawsuit, Henry v. Hulett, filed on behalf of some 200 women who were subjected to a mass shakedown conducted by the Orange Crush in 2011. It is one of two lawsuits in Illinois against the Orange Crush; the other is Ross v. Gossett, which I reported on for Truthout in 2017. In the suit Morris was a part of, a jury recently decided in favor of the women plaintiffs. After an 11-year legal battle, Morris says it was “worth the wait, it was a long ride.”

The shakedown took place at Lincoln Correctional Center, a prison in central Illinois some three hours from Chicago. In 2011, it held almost 1,000 women. Lincoln has since been converted to an institution for men, and the women in Illinois are now held in Decatur and Logan prisons. The John Howard Association, a prison watchdog group, released a 2012 report on Lincoln prison that found the women there were more likely to be incarcerated for low-level drug charges and property offenses, and approximately 80 percent of them had children.

Other state prison systems have tactical teams, but the Orange Crush is unique to Illinois and has a special reputation for brutality.

According to prison authorities, there was no immediate danger when the Orange Crush swept through Lincoln prison in the early morning hours of March 31, 2011. The tactical teams were made up of guards at Lincoln, accompanied by cadets from the Illinois Department of Corrections (IDOC) training academy. As warden Melody Hulett testified, she could not “think of any reason other than the training of cadets that [she] ordered a shakedown.” As the warden’s account makes clear, the shakedown was apparently a deliberate exercise designed to teach new guards how to strike fear into the hearts of those incarcerated at Lincoln and other prisons in Illinois. The reign of terror lasted at least five hours until the lunch hour.

“I was rounded up with the other women in my housing unit, handcuffed, taken to the gymnasium and strip searched,” Ieshia Brown recalled in a sworn affidavit. As they entered, Orange Crush guards screamed at the women, called them “bitches,” told them to “shut up” and, according to Brown, “threatened to put us in segregation if we did not remain quiet.” They put the women in handcuffs that were, Brown said, “especially tight and painful.”

Brown was made to stand for an hour in the common area while guards rounded up the women. “I observed elderly prisoners crying around me because they were in pain,” Brown remembered. They were then taken to the gymnasium where they were again made to stand, “still in tight and painful handcuffs.”

The guards took them in groups of 5 to 7 women to be strip searched in a small, cramped bathroom. The women stood naked, shoulder to shoulder, for 15 minutes. “We were so close together that my elbow and hip were touching the elbow and hip of the woman next to me,” Brown said.

“They were banging on the metal bars of the bunks with their batons, yelling at us, calling us all kinds of horrible names. I couldn’t believe it; it was like I was in a dream.”

The entrance was wide open with the women in full view of male officers and cadets. “I remember seeing male members of the Orange Crush tactical team in the gym looking at me as I was being searched,” Brown said. The women were “required to lift our breasts, bend over and spread our buttocks, and squat and cough.”

Brown recounted how guards made degrading comments while conducting the strip searches. “I remember the corrections officers laughing and making crude comments about some of the women’s body odors,” including one of the guards, “who put a cloth over her mouth and made comments like ‘you bitches stink.’”

When Brown arrived back in her cell, “it was destroyed, with property and belongings strewn about the room without regard to whom they belonged to,” she said.

Patricia Phillips, another one of the women who joined the lawsuit, told a similar story in her affidavit. She spoke of women on their period who “were forced to remove their tampons and sanitary napkins in front of everyone and throw them in a garbage can.” Women were not given replacement tampons or sanitary napkins, so many bled through their clothes.

Many of the women filed complaints. “The drop box in my housing unit quickly overflowed with grievances,” Brown recalled. Both she and Phillips submitted grievances but never heard back.

“I observed elderly prisoners crying around me because they were in pain.”

In its 2012 report, the John Howard Association found IDOC’s grievance system at Lincoln and other prisons to be “flawed and unreliable.” There was a 60-day time limit on filing a grievance, and without a response, individuals were effectively blocked from any remedy under the Prison Litigation Reform Act of 1995 (PLRA), which requires an exhaustion of administrative remedies in order to pursue a claim in federal court. The John Howard Association, which is typically cautious in its approach, said this process was “hugely problematic.” The report pointed to the need for a more “effective grievance system.”

One of the grievances survived the mass purging at Lincoln. The woman, whose name is blacked out on the IDOC grievance form, describes that morning in her own handwriting. Upon being searched, she wrote, “I blacked out,” and woke up naked on the floor feeling “totally violated.”

A federal lawsuit was filed shortly after the incident by attorneys at Loevy and Loevy law firm in the Seventh Circuit located in Springfield, Illinois. Lawyers claimed their clients’ rights were violated based on the Fourth Amendment protecting against illegal search and seizure, and the Eighth Amendment protecting against cruel and unusual punishment. The case progressed slowly through the courts until it was dismissed by appeals court judges in 2019.

In a rare decision, the suit gained new life when it won in front of an “en banc” panel of all 12 judges of the Seventh Circuit, assembled whenever the court believes the issues in a case are of particular significance. The judges released their ruling on August 11, 2020, stating that, “the Fourth Amendment protects a right to bodily privacy for convicted prisoners, albeit in a significantly limited way, including during visual inspections.” The suit was further slowed down by the COVID-19 pandemic. A trial took place in June 2022, and — after 11 years of waiting — a jury decided in favor of the women.

“No prisoner should have to undergo degrading, unprofessional and humiliating strip searches like this ever again — particularly during an unnecessary staff training exercise.”

Attorneys are waiting for a hearing to determine damages and injunctive relief.

“The plaintiff women have fought for over a decade for recognition that what was done to them was wrong. The jury sent a powerful message that women in prison deserve to have their bodies treated with respect and dignity,” Ruth Brown, an attorney at Loevy and Loevy who argued the case, told Truthout. “No prisoner should have to undergo degrading, unprofessional and humiliating strip searches like this ever again — particularly during an unnecessary staff training exercise.”

Veela Morris responded to the victory by telling Truthout: “Prison is its own little world with so many secrets, I wanted this story to come out. We are real women with feelings; the injustice they did to us is just wrong. I want them to never do this again.”