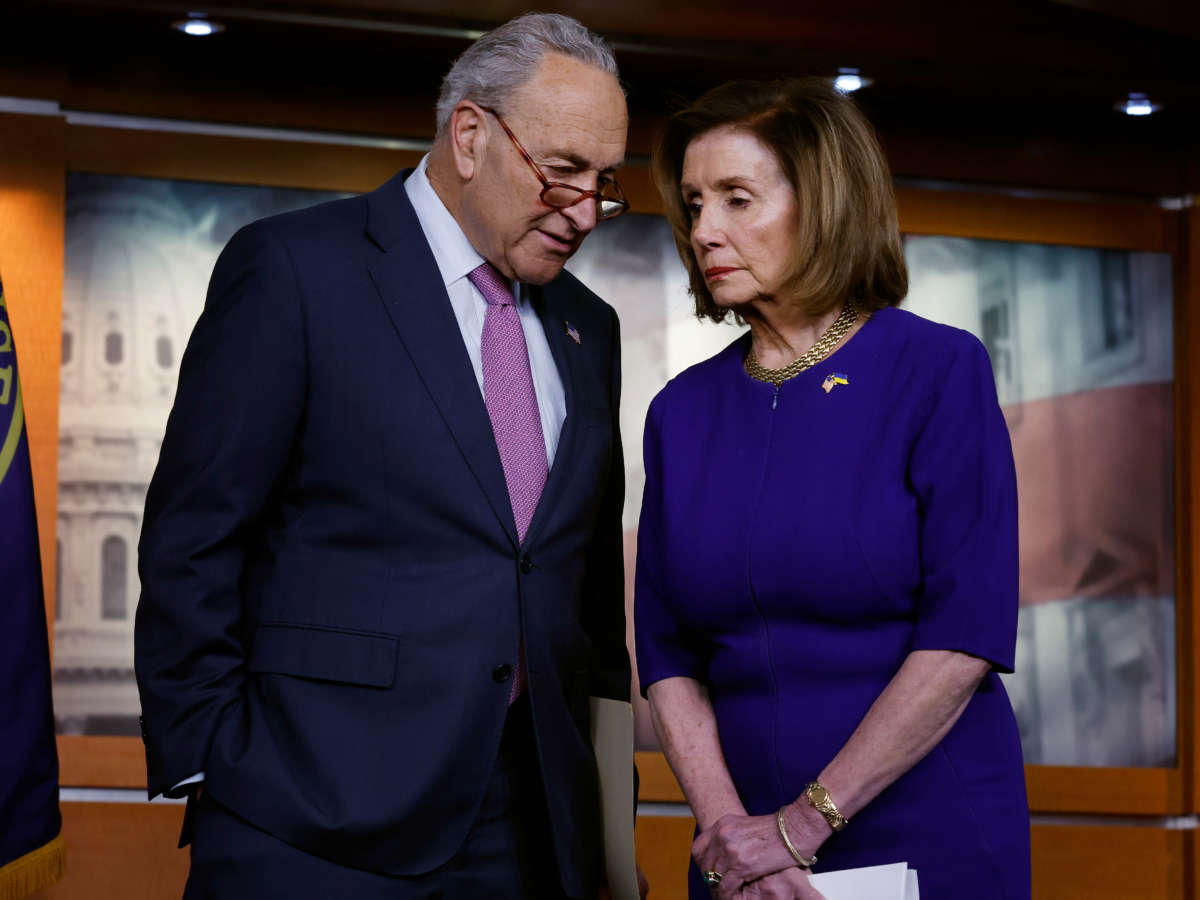 A coalition of government watchdog and advocacy groups sent a letter to Democratic leaders on Tuesday, urging them to take action to ban members of Congress from trading individual stocks, a move the organizations say is crucial to protecting democracy and preserving Congress’s legitimacy.

The group of 22 organizations told Senate Majority Leader Chuck Schumer (D-New York) and House Speaker Nancy Pelosi (D-California) in their letter that the Democrats must bring a stock ban to a vote before the November elections usher in a new Congress, and that the leaders must throw their support behind a ban in order to ensure its success.

“We are at a critical juncture in our nation’s history. The steady stream of revelations that members of Congress have repeatedly flouted basic financial conflict of interest laws,” the groups wrote. “We urge you to lead the way in passing these common sense, popular policies to ensure that members of Congress act in the interest of the people they serve, rather than their own financial interest.”

The letter was signed by watchdog groups like the Campaign Legal Center, Citizens for Responsibility and Ethics in Washington (CREW), Project on Government Oversight and Public Citizen. Advocacy groups like End Citizens United and Greenpeace USA also signed on.

The groups asked Pelosi and Schumer to commit to bringing a stock ban to a vote in early September. Lawmakers have introduced several versions of a congressional stock ban over the past months, and the groups say that a strong and effective ban would include three key components: it would prohibit lawmakers from trading individual stocks, include their spouses and dependent children in the ban, and create a clear enforcement mechanism that will actually compel lawmakers to comply.

“[W]e fear that without your strong leadership and advocacy this critical good government reform will stall,” the letter reads. “The August recess and the November elections loom. Each day that passes increases the chance that Congress will not have time to take up and pass this legislation. That must not happen.”

Until lawmakers pass a stock ban, the coalition warns, there will always be issues with public confidence in Congress. As long as members are regularly found to be in violation of the STOCK Act — which places weak financial reporting requirements on lawmakers — the public will always have a certain degree of mistrust in the motivations of lawmakers, who are often regulating the very companies that they own a stake in.

Indeed, as Gallup found last month, public confidence in Congress is at an all-time low at only 7 percent, down five points from 2021. Meanwhile, proposals to ban members of Congress from trading stocks consistently poll well with the public; in June, Data for Progress found that 70 percent of likely voters support congressional stock bans, while 68 percent agreed that members’ spouses should also be barred from the practice.

Several stock scandals have rocked Congress in recent years, including insider trading accusations against senators from both sides of the aisle who made expedient stock trades after senators had had a confidential briefing about the looming coronavirus pandemic, before the public knew about the effect the pandemic would have on the economy.

The Department of Justice later dropped the insider trading investigations, and the Securities and Exchange Commission (SEC) still hasn’t concluded its investigation into Sen. Richard Burr’s (R-North Carolina) trades. But the seemingly suspicious trades have had a negative impact on the public’s views of Congress, and may even have contributed to Sen. Kelly Loeffler (R-Georgia) losing her seat in the 2020 election.

House Democrats are in the process of drafting a consensus bill to ban members from trading individual stocks that is slated to be released soon. Lawmakers in the Senate are also working on a bill combining several different proposals, though it’s unclear if or when leaders will schedule a vote on the measure.

Though there is broad support for such legislation, one key figure has waffled on her support of the bill: Lawmakers have theorized that Pelosi, whose husband is a prolific stock trader, does not want to bring the bill to a vote, since she herself benefits greatly from the lax rules around the practice.