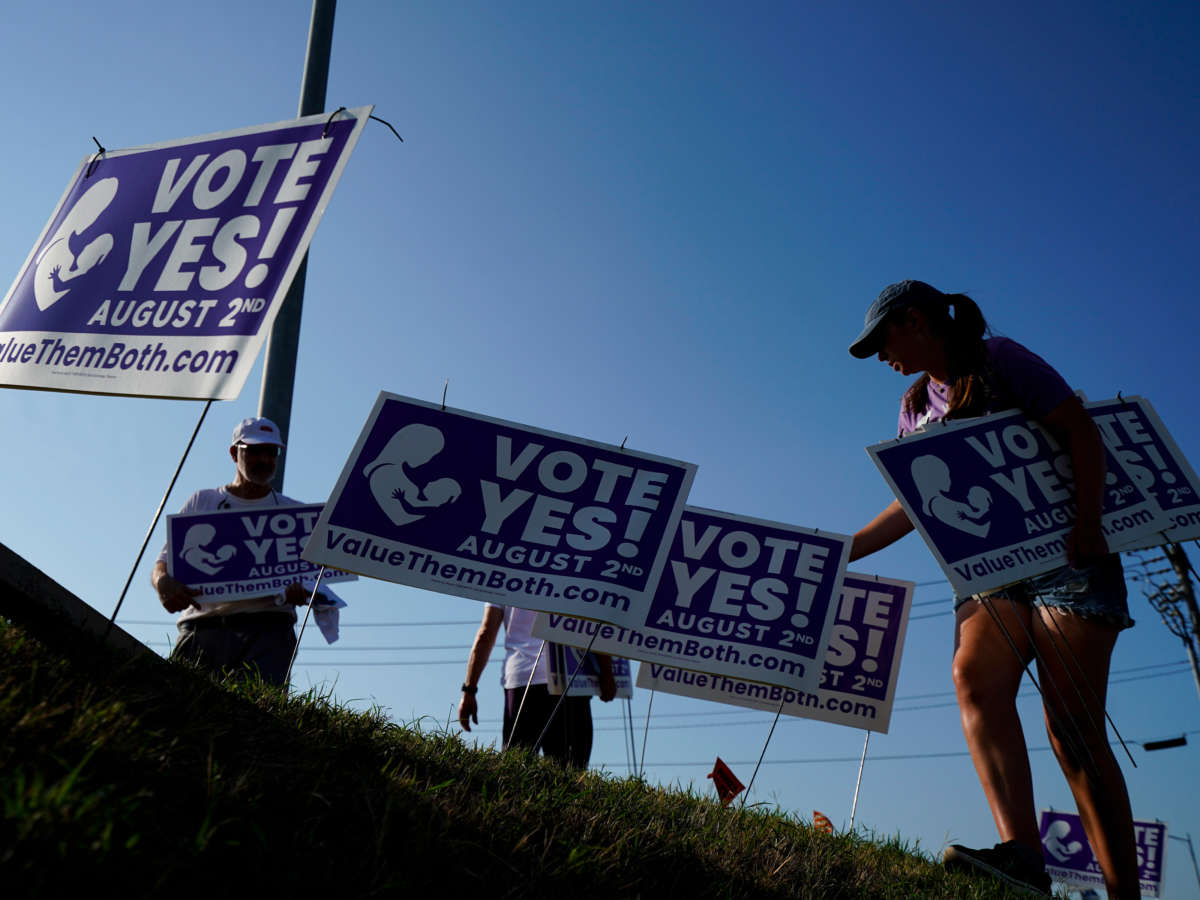 Amid the array of primary election results on Tuesday night and Wednesday morning, one stood out in boldface type: Nearly 60% of voters in Kansas, typically a deep-red state that Donald Trump easily carried two years ago, rejected a ballot referendum that would have amended the state constitution to remove the right to abortion.

The amendment, artfully entitled “Value Them Both,” represented the first ballot initiative on abortion since Roe v. Wade was overturned in June. Abortion opponents described it as a corrective to a 2019 state Supreme Court ruling which found that the Kansas constitution protects abortion rights, while pro-choice groups warned it would swiftly allow Republican lawmakers to enact a total abortion ban.

Republicans never exactly admitted that, repeatedly casting pro-choice warnings about a potential ban as lies and disinformation, even after the Kansas Reflector obtained audio recordings in mid-July of a Value Them Both Coalition staffer telling Republican officials they had abortion-ban legislation waiting in the wings once the amendment passed.

The ballot initiative seemed designed to disadvantage abortion rights supporters from the get-go. It was scheduled for a vote not in the general election in November but in the August primary, which in Kansas traditionally draws few Democrats (since many Democratic candidates run unopposed) or unaffiliated voters, who cannot vote in either party’s primaries. Pro-choice advocates also charged that the ballot initiative’s language was intentionally misleading, designed to confuse voters about what a “yes” or “no” vote meant and including irrelevant provisions, such as public funding for abortion, that don’t actually exist in the state.

This is as dirty as you can get. The anti-abortion coalition is sending out a last minute mass text to Kansas pro-choice voters blatantly lying about the abortion amendment so they vote the wrong way.
Also, they don’t identify themselves which is a federal violation.#ksleg pic.twitter.com/S6bdrtqrc5

On Monday, the eve of Election Day, Kansas voters received an anonymous mass text message that transparently seemed to double down on that tactic, falsely suggesting that a “yes” vote would protect “choice.” The message, which the Washington Post discovered was sent on behalf of a PAC led by former Rep. Tim Huelskamp, a Republican, read, “Women in KS are losing their choice on reproductive rights. Voting YES on the Amendment will give women a choice. Vote YES to protect women’s health.”

Anti-abortion advocates are sending text messages to Kansas voters that falsely claim a YES vote for the constitutional amendment would protect “choice.”

The state ethics committee says that’s perfectly legal, and the group(s) behind it don’t have to disclose their identities. https://t.co/RqNhpnGmyv pic.twitter.com/NSdgBvnhYO

In the face of all these obstacles, Tuesday’s vote amounted to a stunning defeat of the initiative, and an ominous sign for Republicans that their attacks on abortion access are deeply unpopular outside their base, even in one of the nation’s most conservative states. Early observations indicate that Kansas voter turnout greatly exceeded typical primary participation — it was more similar to the 2018 midterms or even the 2008 presidential election — and that a large wave of voters seem to have gone to the polls exclusively to vote against the referendum. What’s more, “blue” counties that went for Joe Biden in 2020 voted by even larger margins against the amendment, while “red” counties registered far fewer votes in support of the amendment than had gone to Donald Trump. As the New York Times observed, “From the bluest counties to the reddest ones, abortion rights performed better than Mr. Biden, and opposition to abortion performed worse than Mr. Trump.”

Faced with these facts, conservatives and anti-abortion advocates rationalized the outcome in various ways, from claiming that they were the real victims of disinformation campaigns to downplaying the significance of the results to suggesting that the initiative failed because it didn’t go far enough.

In the first category, the Value Them Both Coalition led the way, writing in a statement, “Over the last six months, Kansans endured an onslaught of misinformation from radical left organizations that spent millions of out-of-state dollars to spread lies about the Value Them Both Amendment. Sadly, the mainstream media propelled the left’s false narrative, contributing to the confusion that misled Kansans about the amendment.” The coalition went on to warn that Kansas was about to become an “abortion destination,” and, channeling the Terminator, vowed that despite this “temporary setback,” “We will be back.”

Susan B. Anthony Pro-Life America, which sent student canvassers to knock on some 250,000 doors in the Sunflower State, made similar charges: “The abortion lobby’s message to voters was rife with lies that ultimately drowned out the truth.” And Kristan Hawkins, president of Students for Life Action, lamented, “We are disappointed Kansans couldn’t see past the big money that flooded the state, confusing voters about an abortion-neutral amendment that would give them the freedom to vote on abortion policy.”

Although the New York Times reports that the more than $12 million spent on the initiative was “split about evenly” between its anti-abortion supporters and pro-choice opponents — including $1.4 million from SBA Pro-Life America and around $4 million from Catholic organizations — conservatives also claimed, without evidence, that abortion rights advocates had far outspent them.

Mollie Hemingway, editor-in-chief of The Federalist, emphasized that point on Fox News Tuesday night, saying, “I do think that pro-lifers should understand that so much money was spent by hardcore abortion supporters to make sure that amendment failed.” Hemingway went on to suggest that “there was a lot that was packaged” in the amendment and that it might have been more successful had the proposed constitutional change been more “incremental.”

here’s how Fox News is downplaying the anti-abortion constitutional amendment in Kansas going down in flames pic.twitter.com/7hrm9BJ17A

At the National Review, editor Ramesh Ponnuru concurred, suggesting that abortion opponents “come back in a few years with another ballot initiative, this one establishing a gestational limit on abortion: at fifteen weeks, for example.” Ed Whelan, a fellow at the right-wing think tank Ethics and Public Policy Center, similarly argued on Twitter that, “One possible lesson from the Kansas shellacking” was that “Voters facing what they see as a choice between two imperfect options — one too restrictive, one too permissive — will go with the one that is too permissive.” In order to “meet the voters where they are,” he continued, “Pro-lifers need to pursue principled incrementalism.”

By contrast, Matt Schlapp, chair of the Conservative Political Action Conference, or CPAC, which is meeting in Texas this week, sought to make the case — again completely unsupported by evidence — that the amendment failed not because of overreach, but because it was too weak for avid Kansas pro-lifers. In a series of posts on Twitter, Schlapp argued, “Kansas is a strongly pro life state that does not want to take timid steps as [the Value Them Both amendment] was” and that an actual abortion “ban would have won.” The biggest problem with the amendment, he wrote, “was it was too timid for many pro life voters. It was not a heartbeat bill it was a late term ban along w other basic regulations. With a pro life governor look for much stronger pro life victories soon. A blip.”

Mercy and I campaigned for VTB in Kansas. It’s biggest problem was it was too timid for many pro life voters. It was not a heartbeat bill it was a late term ban along w other basic regulations. With a pro life governor look for much stronger pro life victories soon. A blip. https://t.co/YR9Wt1jow6

As conservatives grappled with the loss Tuesday night and Wednesday morning, there wasn’t one uniform narrative. Speaking on Newsmax Tuesday night, former Pennsylvania Sen. Rick Santorum argued that the anti-abortion movement had become overconfident. “I hear all the pro-lifers I know say that people aren’t volunteering as much now, they’re not giving as much money. They feel like they’ve won,” Santorum said. “And Kansas, from the early returns, is going to show that we haven’t won much. This is just the beginning of the battle.” Santorum went on to predict that referendum battles such as this one would become an annual occurrence in Kansas. “This is going to be a persistent thing that we’re going to have to continue to fight.”

Right-wing commentator Erick Erickson suggested that anti-abortion voters might have misunderstood the ballot initiative’s language: “How many Kansans who are generally pro-life but not plugged in went to the polls, read the ballot language, and thought, ‘Shit, I don’t want to let the legislature pass abortion laws. I’m pro-life.’”

So tired of Ivory Tower Liberal elites demeaning the intelligence of heartland conservatives. Also, the Kansas abortion law only failed because Kansans are dumb hicks who can’t read https://t.co/CuM4uMBVZG

Other right-wing voices decried the result as morally equivalent to historical atrocities. Dan McLaughlin, a senior writer at the National Review, tweeted, “Best night for cruelty in Kansas since the Lecompton Constitution” — a reference to an alternative Kansas constitution proposed before the Civil War that would have excluded free Black citizens from the state’s bill of rights.

Faced with the unavoidable takeaway that the Kansas vote proves that the Supreme Court’s recent decision overturning Roe is massively unpopular, other conservatives claimed to see no connection — as in Notre Dame law professor Rick Garnett’s baffling claim that the vote “had nothing to do with Roe” — or seemed to ignore the news altogether, with numerous leading conservative media outlets failing to discuss the result Tuesday night.

Right-wing media presents itself as news but it’s not. It’s propaganda.

The vote also seemed to lead to a confusing welter of claims related to the longstanding conservative argument that abortion should be decided at the state level. In a separate tweet, Erickson struck a let’s-move-on tone, tweeting, “The whole point of ending Roe is so states like Kansas can decide abortion for themselves. The media excitement just kinda makes the Dobbs case’s argument for itself. Exactly the point — decide this democratically at the state level.”

By contrast, Blaze TV host Steve Deace compared the outcome to pre-Civil War debates over slavery, and proposals to allow U.S. territories such as Kansas to decide for themselves whether to permit the ownership of human chattel. “What Kansas will show,” Deace tweeted, “is that America wants abortion severely restricted, but not completely abolished. America is Stephen Douglas, not Abraham Lincoln. Douglas lost that argument.”

For some Democrats, that sort of argument presaged a new threat, now that the prospect of red-state voters eagerly embracing abortion bans has been cast in doubt. As Sen. Chris Murphy of Connecticut warned on Twitter, “Mark my words, the anti-choice movement is going to look at the Kansas result and decide that their best path to criminalize abortion is a federal ban. It’s coming, and that’s what’s on the ballot this November.”