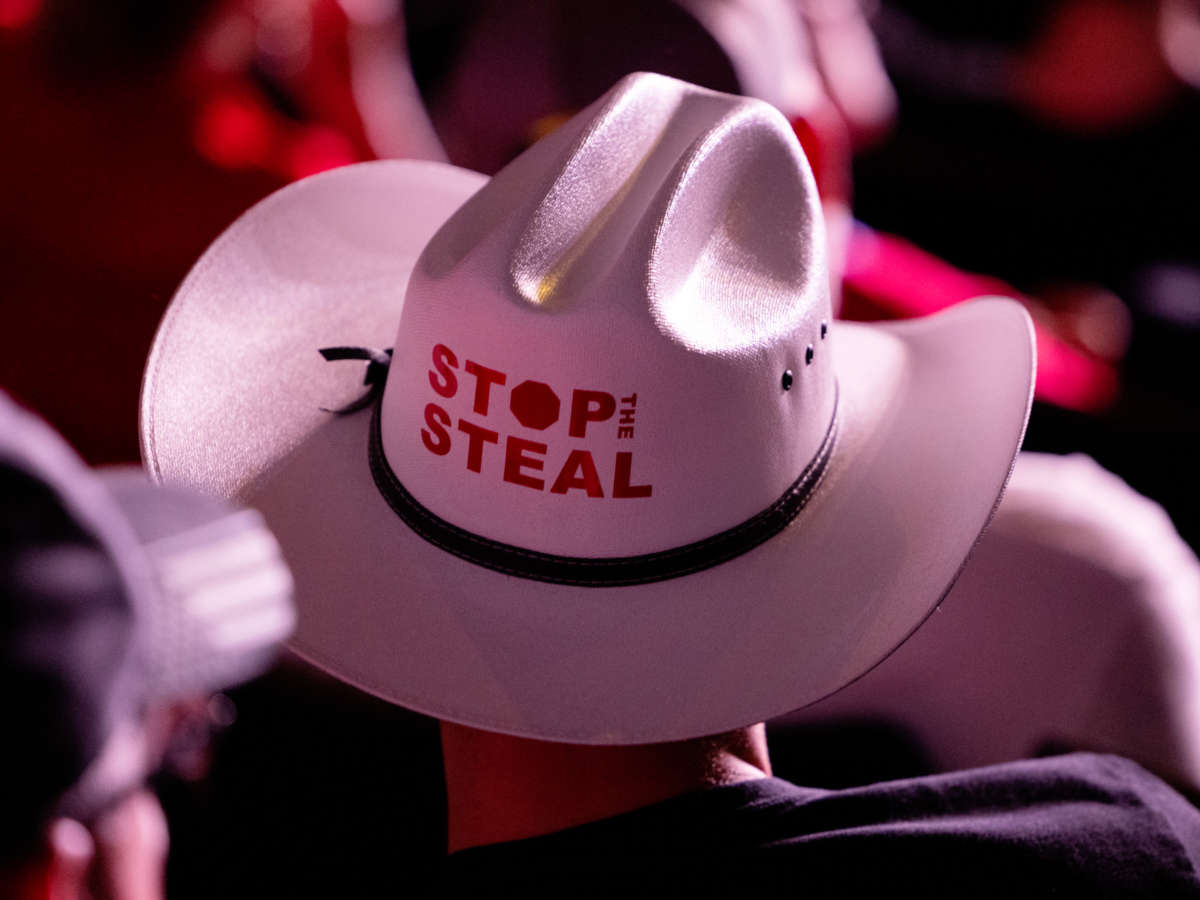 Mark Finchem portrays himself as just a run-of-the-mill ex-cop and rancher. He is indeed an ex-cop who currently ranches outside of Tucson, Arizona, but the hat he now wears is far different.

These days, the four-term state legislator is one of the state’s most preeminent “Stop the Steal” conspiracists. He’s also, as of Tuesday of this week, the GOP’s candidate to be the next secretary of state. He beat out three other competitors in the primary, after having received Trump’s “Complete and Total Endorsement.” If he goes on to be elected as secretary of state in the general election in November, the position would give him pretty much unfettered power to undermine the integrity of upcoming elections in Arizona, including the all-important presidential vote in 2024.

Originally from Detroit, Finchem moved to Arizona years back, and remade himself as a desert uber-conservative. Pick an issue, and he’s on the far right side of it. He opposes gun control legislation but supports curtailing violent video games instead. In 2019, he introduced legislation designed to curb “politicking” in the classroom, essentially an anti-union effort in a state where teachers had recently carried out a successful campaign for higher wages. He has argued that paper money is now “worthless,” that gold and silver should be made legal currency, and that people hording gold coins shouldn’t be taxed on the profits they make on the precious metal. A few years back, in a particularly twisted political stunt, he cosponsored legislation that would have required doctors to try to resuscitate aborted fetuses. He has pushed for gun owners to be able to carry concealed weapons into public buildings and schools, for builders to be able to erect border walls along the U.S.-Mexico border without permits, and for exempting religious organizations from property taxes.

For nearly two years, Finchem, who attended the January 6 insurrectionary gathering in Washington, D.C. has told anyone who will listen that the 2020 presidential election in Arizona (and elsewhere) was rigged; that the vote machines were corrupted; that dead people and undocumented immigrants voted by the thousands in Phoenix, in Tucson, and in other Democratic bastions; and that the state ought to have the power to nullify votes in these counties and simply impose their choice of presidential electors.

The GOP’s newly minted nominee to be Arizona’s next secretary of state has pushed legislation that would allow state legislators to simply ignore the voters in counties they deem to be problematic, and to nominate their own electors to the presidential Electoral College instead. He wants to ban early voting and strictly curtail mail-in voting, which is used by 90 percent of the state’s voters. He hopes to bar the use of electronic vote-counting machines. And he wants to implement laws that would essentially stymie any federal efforts to oversee how Arizona conducts elections and counts votes. So extreme is his stance on voting rights and voting access that The Washington Post this week editorialized that he represents a threat to the future of U.S. democracy.

Earlier this year, in a sign of the seriousness with which investigators took Finchem’s rhetoric and actions, the House Committee investigating January 6 ordered him to surrender his phone records and to appear before the committee to testify.

Finchem wasn’t deterred. A long-time coordinator for the extremist political network known as the Coalition of Western States, a member of the Oath Keepers militia, and a dyed-in-the-wool conspiracy theorist (he argues, for example, that the neo-Nazi rally in Charlottesville in 2017 was a false flag operation carried out by the “Deep State” and the liberal media), he simply ramped up his rhetoric and grew ever more audacious in his claims.

The GOP’s newly minted nominee to be Arizona’s next secretary of state has pushed legislation that would allow state legislators to simply ignore the voters in counties they deem to be problematic.

Finchem boldly told his supporters that if he lost the GOP primary, he wouldn’t concede the result. He met Donald Trump at Mar-a-Lago for 20 minutes, and subsequently became part of the America First Secretary of State Coalition, an effort by Trump and his backers, and one that is pushed at the grassroots level by Steve Bannon, to capture secretary of state offices, and other election oversight positions, in key swing states around the country. (To that end, MAGA-backers had gotten election deniers nominated as GOP candidates for secretaries of state in Pennsylvania, Nevada, Michigan, Alabama, New Mexico and Indiana, and now Arizona has joined that dishonorable list). And, with increasing frequency, Finchem has taken to the airwaves these past few months to promote an array of QAnon conspiracy theories.

The conspiracists who are running for secretary of state positions are, like Finchem, now only one election away from winning power. Because of Arizona’s pivotal role in the 2020 election, and its likely role in 2024, of all of these conspiracists, Finchem is the most concerning. If he succeeds in his quest, it would be one massive step backward both for Arizona, and, because of Arizona’s role as a swing state, for U.S. democracy. It would also be one huge boost for Trump and his ferociously anti-democratic movement.

In 2020, Arizonans elected a Democratic secretary of state, Katie Hobbs, who is now the Democratic Party’s gubernatorial candidate for the November election — and voted for Joe Biden for president. The state has two Democratic senators, and the state legislature, which for decades had large GOP majorities, is now only marginally Republican, and could easily be a Democratic pick-up in November. Polling shows that Hobbs is likely to win the governor’s race to succeed outgoing GOP Gov. Doug Ducey, especially now that the GOP looks like it has chosen as its candidate the far right Trumpian Kari Lake. And Democratic Sen. Mark Kelly is in a strong position to win reelection against the Trump-backed venture capitalist Blake Masters.

Given these trends, it should be a heavy lift for Finchem to win his race to become secretary of state. But, even so, those who care about election integrity in the U.S. are viewing the race with dread as November approaches. For if Finchem does somehow pull out a win, it would be a staggering body blow to U.S. democracy and a massive boost to the fascistic efforts by Trump, Bannon et al., to blow up the guard rails standing in the way of a successful coup d’etat.