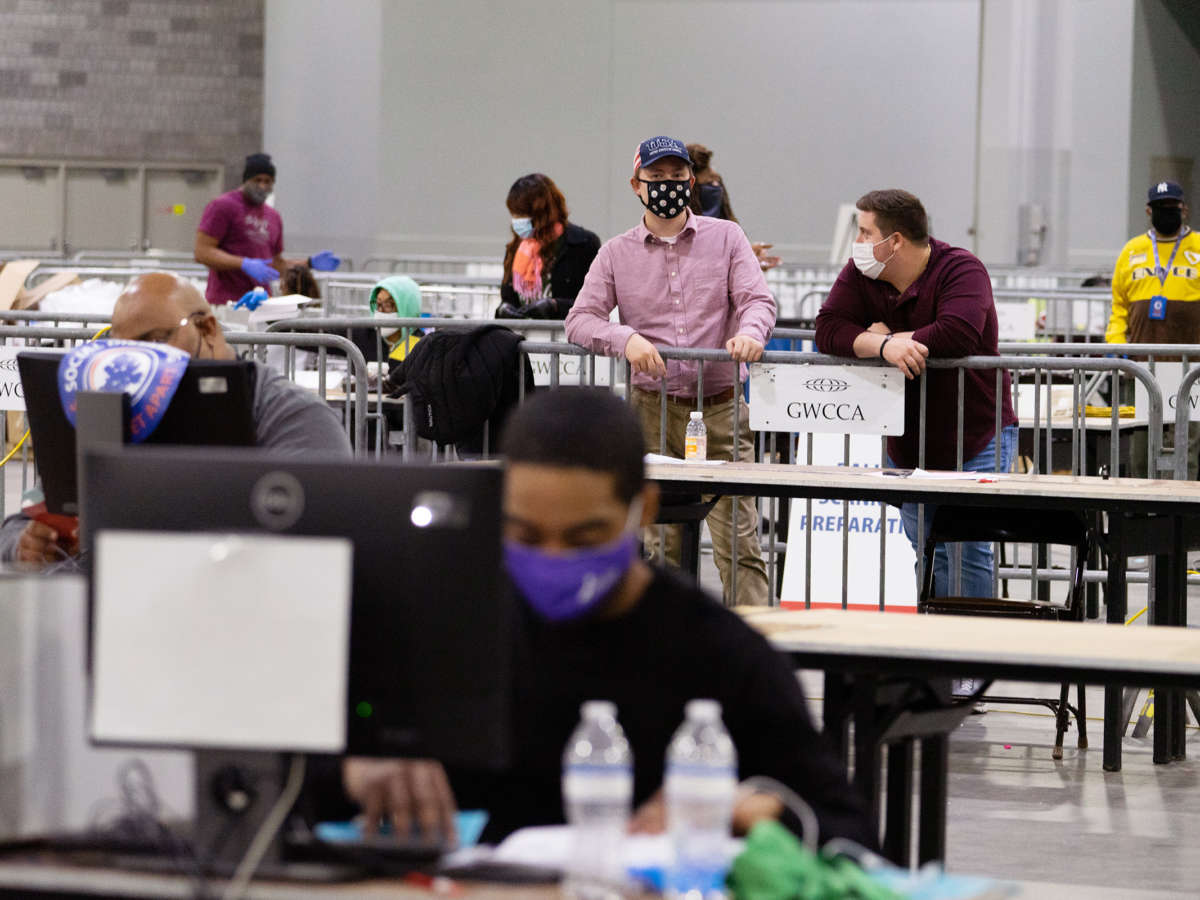 Originally published by The 19th.

Lawrenceville, Georgia — One by one, the speakers approached the podium at the elections meeting to air their grievances.

One person asked about alleged “phantom” voters who may be registered in Gwinnett County, their community just northwest of Atlanta. Another suggested officials count ballots by hand to avoid fraud. And yet another questioned whether the results of the 2020 election, the most secure in history, should have been certified in Georgia — and then cited the penalties for treason.

“I highly recommend that each of you take your responsibility very seriously, because that time is quickly approaching,” that person said.

The dozen or so speakers were gathered Wednesday night to watch local election officials discuss the fate of more than 37,000 voter registrations in the county after a group of election deniers challenged them last month. Similar challenges have arisen in counties across Georgia, as people who have embraced debunked conspiracy theories about the security of elections deluge officials with questions. They are eating up time and resources as election officials — a workforce predominately run by women — are finalizing the logistics for November’s midterms in a state that is in many ways the center of the country’s political universe. The elections they are running here could determine party control of the U.S. Senate, and include a historic governor’s race and other key statewide and legislative races.

Most states allow private citizens to challenge someone else’s eligibility to vote, though the rules vary by state. In many instances, such challenges are related to claims that someone has moved from a county or state and so is no longer eligible to vote there.

Until recently, these challenges had been relatively limited. Now there has been a surge in some pockets of the country, fueled by conspiracy theories about the 2020 election perpetuated by former President Donald Trump. They’re brought by people who believe the lie that Democrats stole the last election, whether by having people vote places they shouldn’t or otherwise fixing the results. Multiple audits, investigations and litigation have found no proof of widespread voter fraud of the 2020 election.

Georgia has the potential to be particularly chaotic with its public challenges to voter rolls, according to voting rights groups in the state. A 2021 law, known as SB202, has a unique provision that now allows people and groups to submit an unlimited number of challenges to the eligibility of voters. The ripple effect of that on the state’s 159 counties, each of which has its own board of elections, is still being sorted out.

Dele Lowman Smith, chair of the DeKalb Board of Registration and Elections, said the increase in challenges to voter registrations has been “a huge headache” for the volunteer board and its limited staff. They have to review the challenges, consult attorneys and schedule hearings for the public.

“It’s been a burden to have all these unexpected and unpredictable meetings,” she said.

Smith said there has been no formal guidance from the state — either the secretary of state’s office or the state board of elections — on how to handle the challenges. She said election officials in other counties have reached out seeking help.

“Everybody has had to figure this out on their own,” she said.

Mike Hassinger, a spokesperson for the office of Secretary of State Brad Raffensperger, who is also running for reelection this year, acknowledged some of the realities that officials are facing.

William Duffey, chairman of the Georgia State Board of Elections, echoed that the board is aware of the large number of recent challenges and noted they must be done in accordance with the law. He said the board may evaluate the process and basis for considering challenges “if circumstances dictate.” He did not specify how, but said it would include “input from all interested parties and the public to guide counties in considering proper challenges.”

This year, at least 64,000 voters have had their eligibility to vote challenged in the state, according to an estimate by New Georgia Project, a voting rights organization. As of late July, at least 1,800 voters have been removed from the rolls in Chatham, Cobb, Dekalb, Fayette, Fulton, Gwinnett and Spalding counties.

Aklima Khondoker, chief legal officer for the New Georgia Project, said most of these counties are in the metro Atlanta area, which are home to many people of color and helped boost President Joe Biden and Vice President Kamala Harris to the White House in 2020.

Voting rights groups worry these challenges will disenfranchise voters in communities with large populations of Black, Latinx and Asian American residents. Gwinnett County is considered one of the most diverse counties in the United States.

“Unlimited challenges is a huge power to give people,” said Lana Goitia Paz, state campaign manager for the Georgia chapter of the national group All Voting is Local, an organization that advocates for removing barriers to voting. “Without providing any guardrails or guidance on that process, it sows a lot of chaos into our very overburdened system.”

The bulk of the challenges have been in Gwinnett County, where a group called VoterGA with ties to Trump allies submitted challenges in late August to more than 37,000 voter registrations. The group has denied allegations that it’s targeting people of color.

Garland Favorito, who leads VoterGA, held a news conference a few weeks ago at which he encouraged people to look into alleged voter registration discrepancies in other Georgia counties.

“Let us know, we’ll get you hooked up.… This is going on in other counties,” he said at the event.

On Wednesday, Gwinnett County elections supervisor Zach Manifold told the local board of elections that 15,000 to 20,000 challenges tied to the 2020 election are not expected to proceed because the registrations had been validated by statistical analysis.

Manifold said an additional 6,000 challenges had also been withdrawn. Election staff were still sorting the remaining challenges into various categories for further review. As election officials tried to determine when to hold a potential public hearing for people to defend their voter registration, they noted the time crunch: The deadline to register to vote for the upcoming election is October 11. They want people to have a chance to register if they’re kicked off the rolls.

Alice O’Lenick, chair of the Gwinnett Board of Registrations and Elections, was at the head of the dais in Lawrenceville on Wednesday. She told The 19th after the meeting that the challenges had been unexpected for the staff. But she believes staff could get through the work.

“It will be time-consuming, but we’ll handle it as best we can,” she said.

Khondoker called the debate Wednesday over the challenges a “zoo.” SB202 requires local boards of elections to hold hearings within 10 days of a challenge or face sanctions.

“What I heard was a very cautious board trying to navigate what it means to go through 30,000-plus challenges and figure out what each of them mean while they are trying to apply the correct code section of Georgia law,” she said.

The challenges are being challenged themselves. The ACLU of Georgia submitted a letter this month asking Forsyth County to restore the eligibility of the 300 voters that it removed or flagged from its rolls. Abhiraman said the ACLU is monitoring what happens next in Gwinnett County and how election officials apply the law.

Smith said she had big plans for the board as chair. She wanted to update internal systems to ensure elections in the county could run more smoothly. The voter roll challenges have made that aspiration more difficult.

Smith also worries what this law will mean for the sustainability of committed election administrators.

“It’s going to make it harder to fill these positions in the future,” she said.

Voting rights groups say it’s also unclear what will happen if private citizens continue to challenge voter registrations up until Election Day. Some impacted voters may be able to cast a “challenge ballot” that is then separated for review. The voter would need to return before officials certify the elections a few days later.

Khondoker said she worries others may fall through the cracks and be unable to register to vote if they’re kicked off the rolls. She urged election board officials not to remove voters from the rolls based on flawed data or speculation and ​​to allow voters to at least cast challenge ballots.

“Bringing all of these layers of confusion to the system puts enormous burden on the voters and on the counties who are responsible for election administration,” she said. “And really, the entire nation at large is looking at Georgia and how they’re handling their elections as a battleground state.”