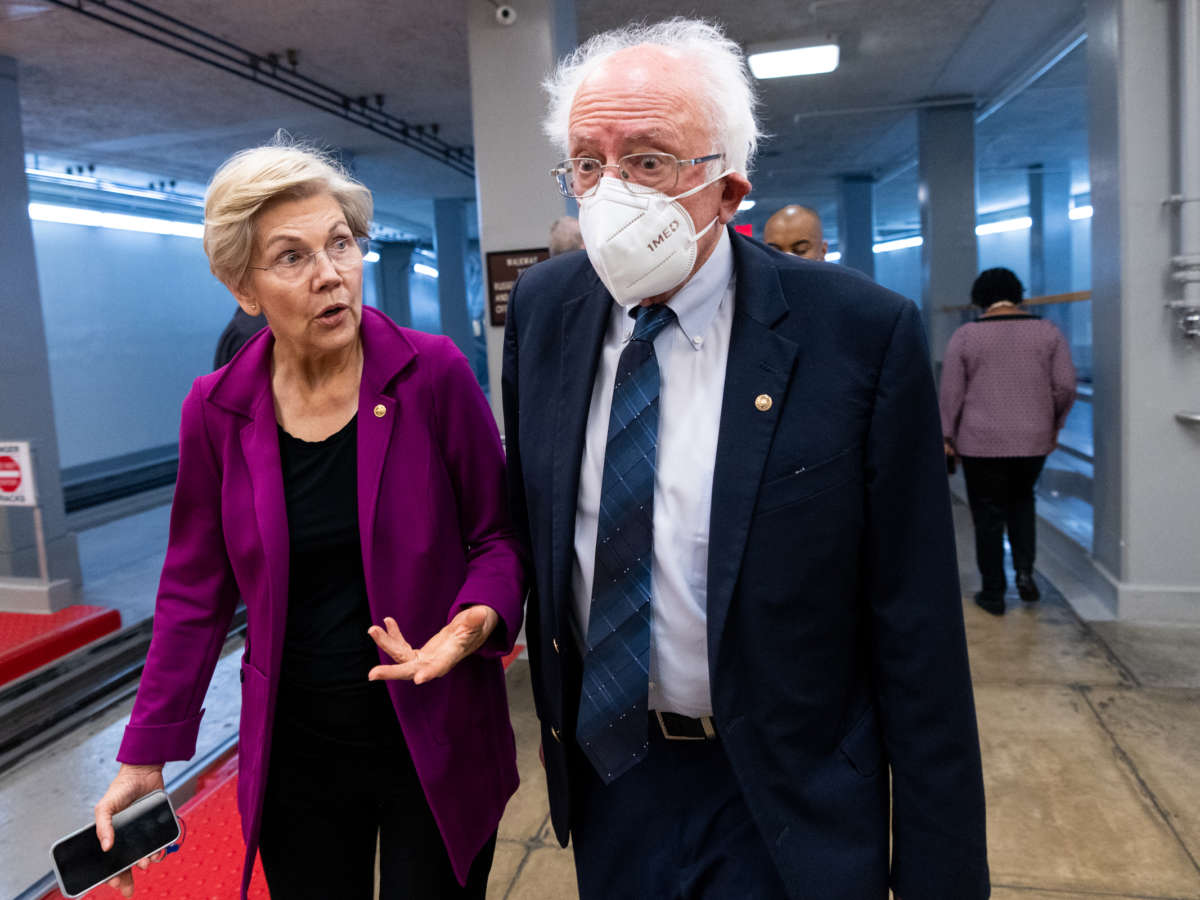 In a letter sent to Senate Majority Leader Chuck Schumer (D-New York) on Thursday, eight senators, led by Jeff Merkley (D-Oregon), wrote that they share concerns expressed by environmental justice groups in recent weeks. They emphasized that the deal, which would blow open the permitting process for federal fossil fuel projects and fast track dangerous projects like the Mountain Valley Pipeline and potentially dozens of others, is especially dangerous for communities on the frontline of the climate crisis.

“For many years, siting decisions for big infrastructure projects have essentially prioritized the perceived societal benefits of fossil energy over the very real costs disproportionately borne by communities of color, low-income communities, and others who have traditionally been marginalized,” the lawmakers wrote. “The result has been the destruction of homes and neighborhoods, lost wealth in those communities, long-lasting health consequences, and premature deaths.”

Lawmakers said that Manchin’s (and the American Petroleum Institute’s) proposed changes to landmark environmental laws like the National Environmental Policy Act (NEPA) and the Clean Water Act threaten to “steamroll over” protections for and public comments from frontline communities.

While recent years have seen some modest investments and improvements in environmental justice initiatives from Congress and the White House, Manchin’s proposed deal could set those advancements back.

“[T]ransparency and the ability for potentially impacted communities to have prior, informed and meaningful participation and consideration are foundational to providing environmental justice,” the lawmakers said. “A number of the proposed permitting reforms would do the exact opposite.”

Congress should focus on strengthening protections and public participation for frontline communities — not rolling back those rights, the lawmakers said.

Environmental, Appalachian, and other frontline groups have expressed strong discontent with the deal, and have spent the last weeks waging protests and sending letters in attempts to block the legislation from being passed. They say that allowing a deal like Manchin’s to go through is tantamount to creating “sacrifice zones” out of communities that would experience the pollution and environmental degradation that inevitably comes with projects like the Mountain Valley Pipeline.

Climate advocates and experts have said that the proposal shouldn’t be characterized as a small deal made to appease Manchin, but rather as a massive fossil fuel expansion bill — one made to fulfill the industry’s long-held wishes to weaken laws that force agencies to consider environmental impacts when reviewing federal projects. Indeed, Big Oil and Republicans have been trying for years to slash NEPA and other environmental laws, just as Manchin has proposed.

Democratic leaders had planned to attach the deal to a must-pass government funding bill that’s due by the end of the month. But after Manchin released the text of the proposal on Wednesday, lawmakers from both sides of the aisle came out against the proposal, with those on the left saying that it would be disastrous for the climate.

The lawmakers haven’t directly called for the deal to be rejected, but asked for it to come to consideration as a stand-alone bill so that they can vote against it without risking a government shutdown. Sanders has pledged to vote against the funding bill if Manchin’s proposal is attached. Meanwhile, even some centrist Democrats are vowing to do everything in their power to kill the deal, saying that it goes far past what they were expecting in terms of giveaways to the fossil fuel industry.