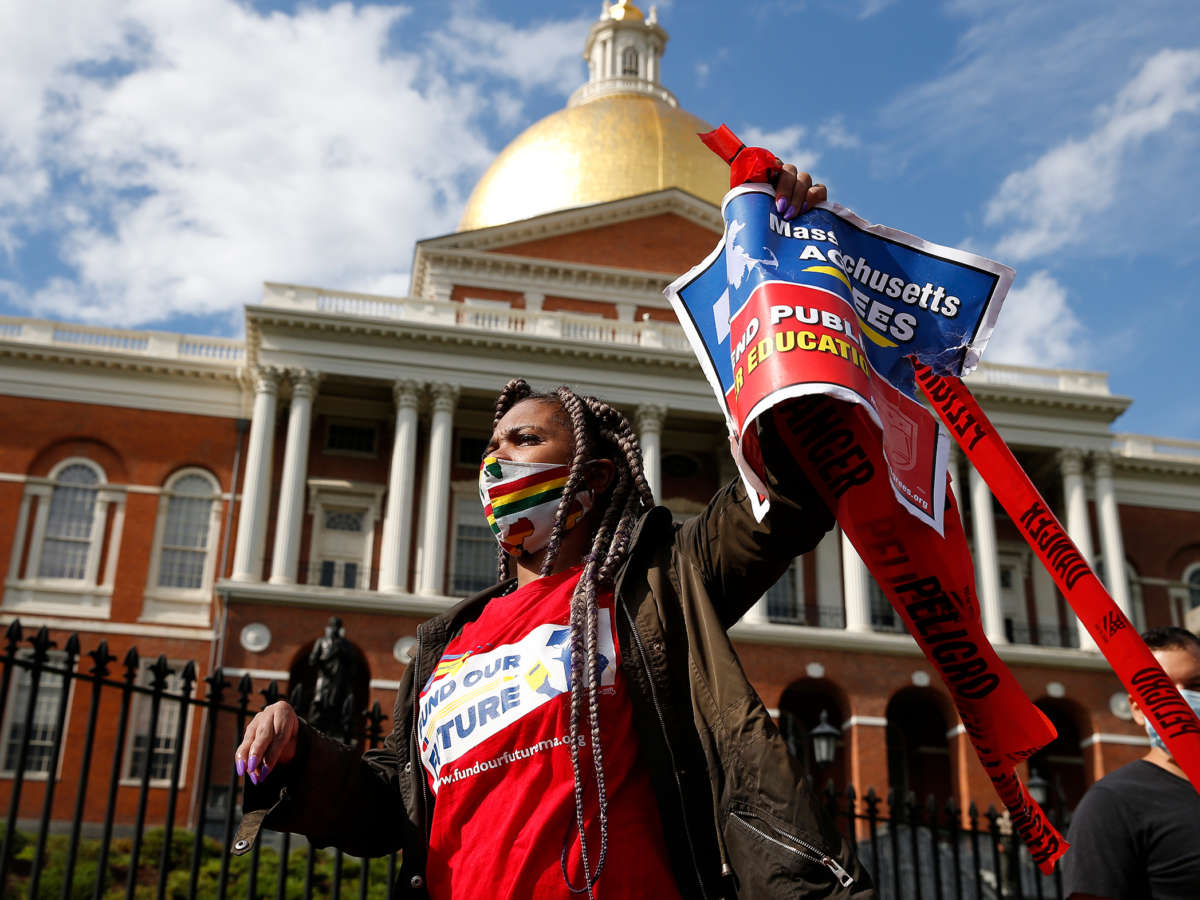 According to “America’s Censored Classrooms,” a report released in August by the nonprofit human rights group PEN America, 39 percent of the 137 educational gag orders introduced in state legislatures so far this year have targeted colleges and universities. Most of them focus on race and LGBTQIA+ issues and seek to suppress discussion of topics the right wing deems “divisive.”

This, PEN concludes, is an about-face for the right: “Just four or five years ago, Republican lawmakers were touting so-called Campus Free Speech Acts purportedly designed to protect intellectual diversity and free expression. Now many are targeting higher education with some of the most censorious language to date.”

Indeed, bills to restrict the freedom to teach and learn have sparked outrage — and organizing — on campuses throughout the country. In addition to increased COVID-inspired health and safety concerns and an ever-increasing spike in the number of low-paid contingent laborers, it is not surprising that campus workers are mobilizing in every region of the U.S. and pushing for a New Deal for Higher Education. The effort is being led by the American Federation of Teachers (AFT) and the American Association of University Professors (AAUP), two groups that entered into a permanent affiliation agreement that took effect on August 1.

The agreement builds on more than a decade of joint work in support of intellectual freedom but allows the 50,000-member AAUP to retain its independence and autonomy.

In promoting the New Deal for Higher Education campaign, both the 1.7 million-member AFT and the AAUP say they are elevating the “common good,” advancing a platform that defends academic freedom, and promoting shared governance between administrators and faculty. In addition, they are mobilizing members to push Congress and the states to reinvest in higher education, oppose censorship, cancel all student debt and protect part-time employees from arbitrary firings.

The stakes have rarely been higher.

“People see that democracy is under assault,” AFT President Randi Weingarten told Truthout. “We now need to protect knowledge and critical thinking and go beyond bread-and-butter issues to redefine union activity. We have to fight authoritarianism as we work to make a difference in people’s lives and communities.”

Paul Davis, national vice president of the AAUP and an emeritus professor at Cincinnati State Technical and Community College, agrees and sees the affiliation as providing enhanced organizing opportunities. “This country and its people are changing,” Davis says. “OK, so let’s adjust and not throw our hands up in the air in despair. When the economy changes, we have to be able to react; we have to change, too.”

“People see that democracy is under assault. We now need to protect knowledge and critical thinking and go beyond bread-and-butter issues to redefine union activity.”

The pace of change, he adds, has escalated. In fact, he reports that shortly after campuses shut down because of COVID-19, both the AAUP and the AFT began receiving requests for help in forming bargaining units. “We began to hear primarily from adjuncts, in every part of the country, who were being treated horribly. They were mobilizing for respect, job security and better pay,” he says.

But it was not just adjuncts who were fed up — and riled up. Cathy Wagner, a professor of creative writing at Miami University of Ohio, began working with the Faculty Alliance of Miami in the spring of 2020, following the announced layoff, in March 2020, of 150 full-and-part-time faculty for the Fall 2020 semester.

“The cuts meant that everyone’s workload was going to go up,” Wagner explains. “Worse, it meant that we would not be able to work with students in the way that we wanted to. It was a scary time, but we talked to a lot of people who’d formed academic unions at their schools. In some of these places, faculty and administrators had come together to discuss budget projections. This did not happen at Miami University. Our administrators refused to come to the table and discuss anything with us.”

But, Wagner says, the union still has not been recognized by Miami University’s administration.

“They are dragging their feet to slow down the process, quibbling over the composition of the bargaining unit,” she explains. “They want to keep librarians, visiting professors and non-tenure-track faculty out. We say ‘no,’ and are hoping the State Employee Relations Board will force them to stop stonewalling.” Wagner says the Faculty Alliance of Miami, in tandem with the AAUP and the AFT, is pushing the State Employee Relations Board to issue a decision on the make-up of the bargaining unit; since 9 of 10 public university faculty unions in Ohio include non-tenured faculty, “we believe that precedent is on our side,” she says.

Another issue has also promoted increased activism — and made the Faculty Alliance increasingly visible on campus. “Turns out, Miami had higher enrollment numbers for the 2021-2022 academic year than the administration expected,” Wagner says. “The college also got CARES Act money so we ended up with a $262 million surplus. It makes my stomach hurt to even think about this.”

Financial boondoggles notwithstanding, AFT/AAUP organizers say faculty throughout the country are united in demanding administrative transparency, faculty and staff input in decision-making, better pay and the academic freedom to determine what course materials to use and what content to include in the courses they teach.

Ernesto Longa, president of United Academics at the University of New Mexico (UNM), says those concerns motivated faculty to begin organizing there in 2014. He credits both the AFT and the AAUP with helping them win union recognition in 2019. “We began negotiating our first contract at the beginning of 2020,” Longa told Truthout. “Then the pandemic hit and since we were dealing with a very anti-union administration it took us 18 months to hammer out the first three-year contract. Thankfully, the AFT provided some of the heavy lifters who helped us with table negotiations and research.” The successful result included a 7.12 percent raise in year one, with annual wage reopeners during each of the following two years covered by the contract.

“Every AAUP member is now an AFT member. Together, we’re fighting for democracy and for academic freedom.”

Longa says that while he and the negotiating team were pleased with the initial contract, everyone understands that more needs to be done to ensure that adjuncts and others are paid decently and have job security. “There are still adjuncts who make $2,500 for teaching a three-credit class,” he says. He also notes that United Academics still has a lot to learn about organizing and negotiating. “We’re slowly finding out just how pro-employer the law is when it comes to contract interpretation,” he says. “We now know that our language has to be precise. A clause that says UNM may do something, rather than shall do something, allows UNM to sidestep the protections we thought we’d won.”

Another challenge, Longa continues, involves outreach to form a coalition between United Academics and members of unions that represent other staff at UNM — the college’s hospital employees, food service workers, graduate students, security staff and medical interns and residents belong to what he calls a “smorgasbord of unions” — to build solidarity.

“We want to do wall-to-wall organizing and coordinate our bargaining efforts,” he says.

Unlike the faculty at UMN, faculty at New Jersey’s Rutgers University have been organized for decades. Nonetheless, they have been working without a contract for more than three months. Rebecca Kolins Givan, an associate professor in the School of Management and Labor Relations, says that although students and faculty recently returned to campus, staff are already planning a series of escalating actions to ensure that they get an equitable contract.

“We’ve been in an ongoing and beneficial affiliation with the AFT and the AAUP since the early 2000s,” Givan told Truthout. “Right now, we’re seeing heightened awareness of the need for greater investment in public higher ed due to the outsourcing of staff roles and increased dependence on adjunct labor.” Additionally, she sees the need to defend academic freedom as a priority since 12 members of the Rutgers faculty are on the Professor Watchlist compiled by the right-wing Turning Point USA. All 12 have been targets of hate mail, doxing and smear campaigns because of their anti-racist and pro-LGBTQIA+ work.

While the University Faculty Senate has denounced the list, Givan nonetheless worries that some faculty may self-censor in an effort to avoid negative publicity.

That said, Givan says she is proud that Rutgers’s bargaining unit continues to be a leader in academic unionism, promoting equal pay for equal work for adjuncts, supporting environmental justice initiatives on- and off-campus, and opposing overspending on athletics. A recent scandal in which the 50-plus member football team racked up $450,000 in DoorDash bills — 19,745 orders between May 2021 and June 2022 — is a case in point.

Challenging this, and fighting attacks on higher education more broadly will, of course, be an uphill slog. At the same time, several recent campus labor victories bear mention. A five-day strike, led by AFT/AAUP members at Eastern Michigan University in Ypsilanti, ended in mid-September after 500 faculty walked off the job. Similarly, AFT/AAUP-organized faculty at Rider College in Lawrenceville, New Jersey, reached a tentative agreement on a five-year contract, averting a strike earlier this month.

The AFT’s Randi Weingarten sees these victories as harbingers of future successes. “Every AAUP member is now an AFT member,” she says. “Together, we’re fighting for democracy and for academic freedom. Both are under assault. Precarity has become a through line on campuses throughout the country, but people understand the importance of organizing. They know that we’re working to make our communities better and make a positive difference in people’s lives.”

What to expect from Tesla’s AI Day event

What to expect from Tesla’s AI Day event