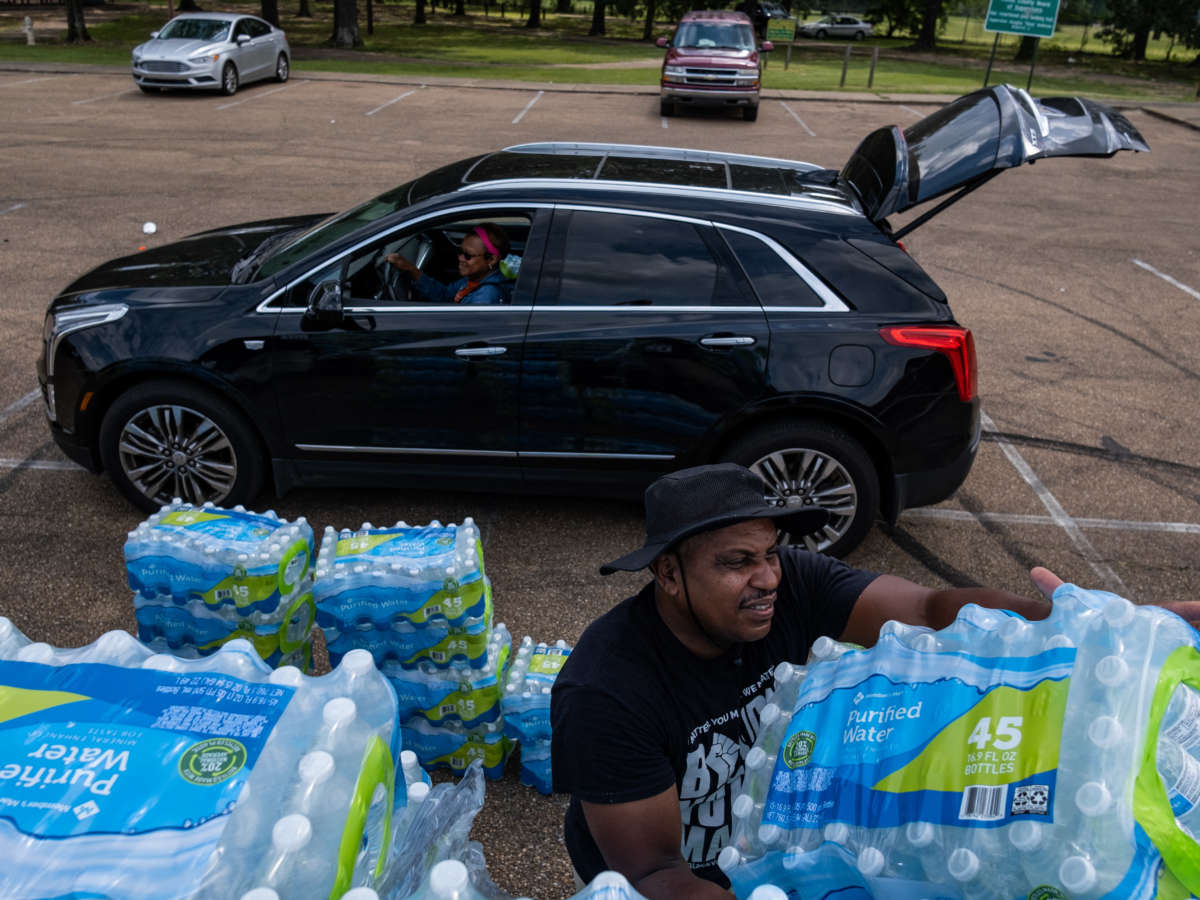 Jackson, Mississippi — In mid-September, Howard Sanders bumped down pothole-ridden streets in a white Cadillac weighed down with water bottles on his way to a home in Ward 3, a neglected neighborhood that he called “a war zone.”

Sanders, director of marketing and outreach for Central Mississippi Health Services, was then greeted at the door by Johnnie Jones. Since Jones’ hip surgery about a month ago, the 74-year-old had used a walker to get around and hadn’t been able to get to any of the city’s water distribution sites.

Jackson’s routine water woes became so dire in late August that President Joe Biden declared a state of emergency: Flooding and water treatment facility problems had shut down the majority-Black city’s water supply. Although water pressure returned and a boil-water advisory was lifted in mid-September, the problems aren’t over.

Bottled water is still a way of life. The city’s roughly 150,000 residents must stay alert — making sure they don’t rinse their toothbrushes with tap water, keeping their mouths closed while they shower, rethinking cooking plans, or budgeting for gas so they can drive around looking for water. Many residents purchase bottled water on top of paying water bills, meaning less money for everything else. For Jackson’s poorest and oldest residents, who can’t leave their homes or lift water cases, avoiding dubious water becomes just that much harder.

Jackson’s water woes are a manifestation of a deeper health crisis in Mississippi, whose residents have pervasive chronic diseases. It is the state with the lowest life expectancy and the highest rate of infant mortality.

“The water is a window into that neglect that many people have experienced for much of their lives,” said Richard Mizelle Jr., a historian of medicine at the University of Houston. “Using bottled water for the rest of your life is not sustainable.”

But in Jackson an alternative doesn’t exist, said Dr. Robert Smith. He founded Central Mississippi Health Services in 1963 as an outgrowth of his work on civil rights, and the organization now operates four free clinics in the Jackson area. He often sees patients with multiple health conditions such as diabetes, hypertension, or heart problems. And unsafe water could lead to death for people who do their dialysis at home, immunocompromised individuals, or babies who drink formula, said Smith.

Residents filed a lawsuit this month against the city and private engineering firms responsible for the city’s water system, claiming they had experienced a host of health problems — dehydration, malnutrition, lead poisoning, E. coli exposure, hair loss, skin rashes, and digestive issues — as a result of contaminated water. The lawsuit alleges that Jackson’s water has elevated lead levels, a finding confirmed by the Mississippi State Department of Health.

While Jackson’s current water situation is extreme, many communities of color, low-income communities, and those with a large share of non-native English speakers also have unsafe water, said Erik Olson, senior strategic director for health and food at the Natural Resources Defense Council. These communities are more frequently subjected to Safe Drinking Water Act violations, according to a study by the nonprofit advocacy group. And it takes longer for those communities to come back into compliance with the law, Olson said.

The federal infrastructure bill passed last year includes $50 billion to improve the country’s drinking water and wastewater systems. Although Mississippi is set to receive $429 million of that funding over five years, Jackson must wait — and fight — for its share.

And communities often spend years with lingering illness and trauma. Five years after the start of the water crisis in Flint, Michigan, about 20% of the city’s adult residents had clinical depression, and nearly a quarter had post-traumatic stress disorder, according to a recent paper published in JAMA.

Jones, like many locals, hasn’t trusted Jackson’s water in decades. That distrust — and the constant vigilance, extra expenses, and hassle — add a layer of psychological strain.

“It is very stressful,” Jones said.

Over time, that effort and adjustment take a toll, said Mauda Monger, chief operating officer at My Brother’s Keeper, a community health equity nonprofit in Jackson. Chronic stress and the inability to access care can exacerbate chronic illnesses and lead to preterm births, all of which are prevalent in Jackson. “Bad health outcomes don’t happen in a short period of time,” she said.

For Jackson’s health clinics, the water crisis has reshaped their role. To prevent health complications that can come from drinking or bathing in dirty water, they have been supplying the city’s most needy with clean water.

“We want to be a part of the solution,” McNair said.

Central Mississippi Health Services had been holding water giveaways for residents about two times a month since February 2021, when a winter storm left Jackson without water for weeks.

But in August, things got so bad again that Sanders implored listeners of a local radio show to call the center if they couldn’t get water. Many Jackson residents can’t make it to the city’s distribution sites because of work schedules, lack of transportation, or a physical impairment.

“Now, all of a sudden, I am the water man,” Sanders said.

Thelma Kinney Cornelius, 72, first heard about Sanders’ water deliveries from his radio appearances. She hasn’t been able to drive since her treatment for intestinal cancer in 2021. She rarely cooks these days. But she made an exception a few Sundays ago, going through a case of bottled water to make a pot of rice and peas.

“It’s a lot of adjustment trying to get into that routine,” said Cornelius. “It’s hard.”

The day that Jackson’s boil-water advisory was lifted, Sanders was diagnosed with a hernia, probably from lifting heavy water cases, he said. Still, the following day, Sanders drove around the Virden Addition neighborhood with other volunteers, knocking on people’s doors and asking whether they needed water.

He said he has no plans to stop water deliveries as Jackson residents continue to deal with the long-term fallout from the summer’s crisis. Residents are still worried about lead or other harmful contaminants lurking in the water.

“It’s like a little Third World country over here,” Sanders said. “In all honesty, we will probably be on this for the next year.”