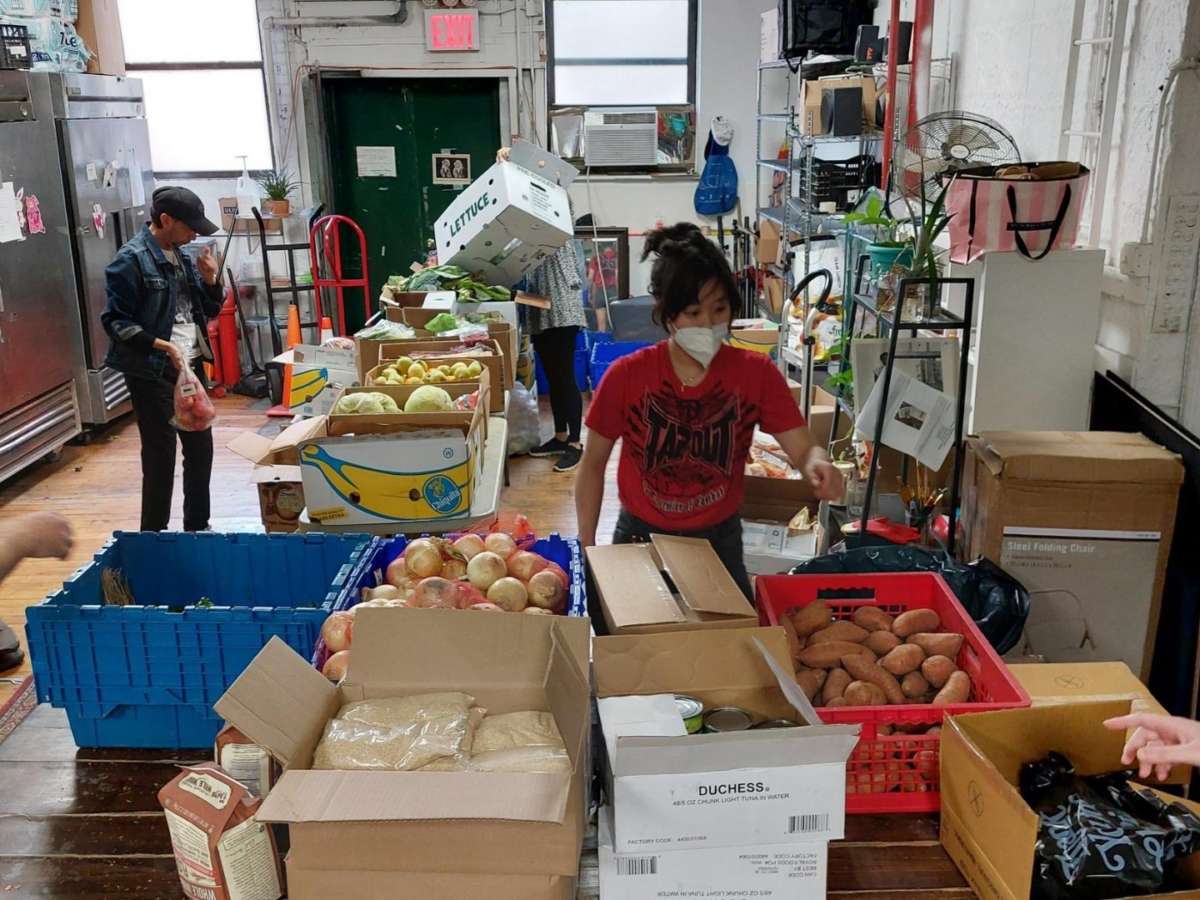 We all love a good bargain, and are sometimes willing to go to great lengths to secure one. But for a few hours at Woodbine*, an experimental hub in Ridgewood, Queens, New York, thrifting was entirely free and there wasn’t a catch. Perhaps unsurprisingly, a flood of people showed up to the space 30 minutes before its “Free Store” event was supposed to begin.

At a free store, people are encouraged to bring things they no longer need, but are too nice to throw away, and take things they want or need without any questions asked. It’s meant to be an experimental space for building an economy based in solidarity, not sales or barter, and to harness the immense amounts of waste and excess generated in capitalist economies. Pop-up models encourage people to congregate in one space on a particular day, and the momentary disruption of norms generates a buzzy atmosphere that can be conducive for building community.

Putting the free store together was fairly simple. Most of us involved in organizing it met through Woodbine’s soccer teams. We transitioned from running around, scoring goals and high-fiving each other on the field to running around with heaps of donated clothes, toys, home goods and electronics that our neighbors donated. We plastered flyers in English, Spanish, Arabic and Mandarin around the neighborhood and on Woodbine’s social media accounts to spread the word. We borrowed tables and clothing racks from Mil Mundos, a bookstore curated to celebrate Black, Latinx and Indigenous heritage in neighboring Bushwick that frequently hosts clothing swaps and distributions with free items, and brought leftover items to other community-based groups after the free store ended. During the free store, the atmosphere was fairly chaotic and crowded, and it was difficult to stay on top of organizing donations. But, overall, the event didn’t require that much time or labor.

I overheard someone saying, “They are subverting the store,” which is exactly what we were trying to do. Under the logic of capitalism, you only deserve to “make a living” if you sell yourself and your labor power to a capitalist. At a free store, the criteria for participating is simply being alive.

People who benefit from the current system — landlords, police, politicians and bosses — rely on mass media and our schooling systems to deceive and dull the population into believing capitalism is the most efficient way, or the only viable way of producing and distributing resources. As British philosopher Mark Fisher famously wrote, “It is easier to imagine the end of the world than the end of capitalism.” But what currently exists is one way of organizing a society of many, and it isn’t serving most of us. An ability to imagine and create non-hierarchical alternatives threatens the authority of people benefiting from the current system. At a free store, we can begin to glimpse a world where everything is free and built on voluntary exchange of labor, resources and knowledge.

The free store concept is far from new. Up Against the Wall Motherfuckers, “a street gang with analysis,” organized free stores in New York City during the late 1960s. The Diggers, a radical theater group, popularized them in San Francisco and New York City with dramatic flair and humor. For them, everything was theater and people were actors who could create the reality they wished to see together. “When materials are free,” they wrote in 1968, “imagination becomes currency for spirit.” Young Black revolutionaries involved with the Diggers opened a Black People’s Free Store in the Fillmore ghetto of San Francisco in 1967. One of the organizers, Roy Ballard, explained how the free store was opening the minds of people in his community in an interview with the publication Venture:

Our thing in the store is not the black and white issue — we’re far from that. Here in the store we welcome everybody. The only way we’re going to bring about change is people communicating. Once a person closes his mind, that’s it. Things become one-sided. Brother, I’m going to keep my mind open! This store is bringing about a hellava lot of wisdom. It’s helping a lot of young ones on the street who are coming in here. And it’s opening their minds to where it’s really at. That’s our whole thing here in this store. Opening minds — to share, to make understanding, to feel for each other. What I’m thinking is what would happen if black people could disaffiliate from money altogether.

More recently, anarchists started organizing “Really Really Free Markets” (RRFMs) throughout the 2000s, which tend to be pop-up events, across the United States. These markets never completely dwindled but, if media coverage is to be an accurate benchmark of organizing efforts, there seems to have been an uptick in RRFMs over the past couple years. Collectives are organizing them in cities large and small, from Louisville, Kentucky; Corvallis, Oregon; Avon, North Carolina; Ypsilanti, Michigan; Tempe, Arizona; New Paltz, New York; Athens, Georgia; Jersey City, New Jersey; and in many other locations.

From 2015 to 2019, some of the only media coverage of “free stores” was Amazon’s so-called free stores, which are just dystopian stores that rely on automation and surveillance to bill customers without a physical checkout line.

In 2022, anti-capitalist free store spaces seem to be gaining a resurgence alongside the mutual aid networks that have blossomed out of the COVID-19 pandemic.

A network of free community fridges in Atlanta that arose during the pandemic supported the opening of The Grocery Spot, a pay-what-you-can grocery store, in March 2022. Groceries are free for anyone who can’t pay, and community members with means for paying or donating are encouraged to do so. It’s also a community space that hosts bonfires, film screenings and holiday events in their lawn. They’ve seen an influx of shoppers during the summer months in the midst of rising inflation. Meanwhile, up in Minneapolis, Minnesota, a nonprofit relied on increased food donations during the pandemic to kickstart the opening of two free grocery stores.

Mutual Aid Disaster Relief Richmond (MAD RVA) is renting a space to open a free store this fall in Northside, a lower-income neighborhood and a food desert in Richmond, Virginia. Originally, throughout much of the pandemic, the collective ran a free supply drive out of a warehouse where volunteers ran a hotline and delivered requested items to people’s homes. But Tamanna Sohal, an organizer with MAD RVA, told me that they received feedback from supply drive participants that they wanted more agency over the items they received. The supply drive model was less able to cater to individualized needs because the group had a limited inventory and people weren’t able to select the brands they wanted. MAD RVA organizers anticipate having a much larger inventory at the free store, and people will be able to select what they want or need at the space.

“A big part of what we want to do with the free store is prioritize people’s choices in what they’re getting and their autonomy,” she said. “We’re also prioritizing accessibility in terms of location, how our shelves are set up and what we’re offering.”

Sohal also emphasized the collective’s desire to facilitate connections and relationships in the neighborhood. “People can come in with their kids and sit down or sit outside and rest and chat. We’ve been talking about having a really big, comfy seating area, and sitting options outside,” she said. “We know the power of talking to your neighbors, and we’re hoping that having a physical free store will allow conversations between neighbors so that people are letting people around them know that this resource exists. Maybe neighbors will pick up groceries for each other.”

In Chicago, several collectives opened a volunteer-run free store at a church in Rogers Park during the pandemic, and they recently moved into their own space. Neighbors came together to build a do-it-yourself free store outdoors in Clinton Hill, Gowanus and in Ujamaa in New York City. In January 2022, mutual aid organizers opened a free store in Chattanooga, Tennessee. And a married couple used their retirement savings to open a free store and a community fridge in Dublin, Virginia, a town with just over 2,500 people in 2021.

“There’s a really high rate of poverty in Pulaski County, and in a lot of Southwest Virginia and its really common for a lot of places that do offer help to do a lot of means testing and put other barriers in-between people and help,” Hazel Wines, an organizer involved in the free store told VPM News. “And we wanted to remove as those barriers and just be a place where people could help each other. It’s not just food, it’s not just clothes…. Everyone deserves to live a life of dignity and we want to help provide that.”

All of these efforts ultimately follow in the footsteps of some Indigenous societies, like the Navajos, that reproduced communal living for centuries. Colonizers attempted to destroy Indigenous communalism on Turtle Island through warfare and by enacting laws like the Dawes Act, which enforced private property and dissolved 90 million acres of Indigenous communal landholdings.

Indigenous communalism underpinned the culture and economy at Standing Rock in 2016 by offering massive tents full of free items, like sleeping bags and blankets. Meals were cooked and served collectively for free. (One attendee who spent several weeks at Standing Rock expressed shock after being asked to pay for food again at a store once he left the camp.)

Despite centuries of colonialist violence, cooperation is still a glue that holds societies together. When we are invited to a dinner party, we may bring a dish over. If it’s raining outside, we give our friends an umbrella. We cooperate with colleagues at our workplaces every day. As the late anthropologist David Graeber and political theorist Andrej Grubacic wrote, “[C]ommunism is not an abstract, distant ideal, impossible to maintain, but a lived practical reality we all engage in daily, to different degrees, and that even factories could not operate without it — even if much of it operates on the sly, between the cracks, or shifts, or informally, or in what’s not said, or entirely subversively.” Free stores embody these nascent communistic impulses, pulling them out of the informal cracks and into the public sphere.

As isolated, sparse units, free stores lack the resiliency and resources needed to build power on a scale needed to challenge the capitalist economy. But what if free stores spread in a given city to include 10, 20, or 30 hubs, and what if they mutually supported each other, while coordinating with other grassroots organizers, farmers, builders, and designers who were willing to contribute to their talents and resources to the projects? A well-coordinated network of free store hubs could begin to act as building blocks for moving beyond the capitalist economy and toward one that we co-produce together.

*The author has been involved with Woodbine since June 2021.