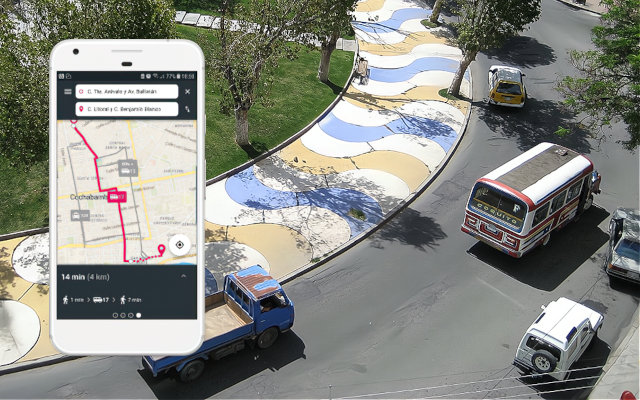 Most of us take for granted the ease with which we navigate our cities. Within seconds, a flourish of fingers can result in a comprehensive, live route plan with multiple transport options and delay warnings. Want to stop for a coffee on the way? Here are the 17 best-rated cafes on your route, complete with opening times, ratings and directions. Even in smaller European cities and towns, map options are — at least somewhat — reliable and frequently updated, even if transport options could be better.

However, in cities such as Duitama, the situation is quite different. In this city of more than 112,000 people in central Colombia, there is no official public data source with the routes and schedules of the three bus companies. This means users need to manually cross-check the schedules of each provider to find a suitable route. Delays are impossible to predict, and there’s no way of telling where your nearest stop is unless you know the city well.

Closer to home, navigating cities can be challenging. For instance, is a transport system really practical if it fails to take into consideration its disabled users? Frequently, people with mobility requirements find it challenging to secure an optimal public transport route. If lifts or escalators are broken, suggested stations have limited wheelchair access or there are other unforeseen obstacles along the planned route, transport users in wheelchairs, with pushchairs or with other mobility issues can face real issues completing their route.

Trufi is helping the people of Cochabamba navigate their city.

He acknowledges that “for someone in an industrialized country, what our apps do doesn’t sound too impressive… [but] for example in Cochabamba you can’t plot a trip across town on the buses (called trufis) using Google Maps. But with our app, you can. To the people of Cochabamba, this ability is very empowering.”

Trufi’s specialisation is the provision or collation of geographical routing data that is then developed into useable mobile apps. To facilitate this data collection and sharing, groups such as the Arcadis IBI Group, MobilityData as well as Trufi have developed open-source tools that can be used by anyone. Johnson says “our apps need the data to do what they do, but we don’t keep that data to ourselves.”

In some cases, this work has helped to create the first thorough public transport map of cities, including of capitals such as Nouakchott, Mauritania. They have also already used this technology to develop mobility apps for a diverse and ever-growing cache of global cities, including Tetouan in Morocco, Accra in Ghana, Cochabamba in Bolivia and several cities across Germany.

The latter is home to winner of the recent MobiData BW Hackathon, route:able, an app currently in proof-of-concept stage. It will allow users to plan journeys without encountering out-of-service elevators, amongst other prohibiting factors.

According to their website, “transport users… with mobility issues often encounter problems just getting to the bus, train, or trolley they need to use. An unforeseen obstacle along the route they have planned – such as an out-of-service elevator – can hamper their ability to complete their journeys.”

Like the main Trufi app, which makes public transport, including informal transport, accessible to citizens via their mobile phones, route:able looks to use OpenStreetMap for mapping public transport routes. German railway company Deutsche Bahn will provide the data on working and nonworking elevators via their public API, giving those with mobility issues the best possible chance of a smooth journey.

Over in Ghana, Trotro app collates informal and formal transport options and identifies missing routes to help people navigate the city of Accra.

“The lack of transport data for the diverse modes in African cities often results in decisions being taken without consideration for what exists, what works, and what does not” say Trufi founders.

Their model, which uses open data, open-source tools and a collaborative ‘digital commons’ through work with the local community, has the potential to drastically reduce costs and improve the impact of public transport. This could have knock-on effects for the green mobility transition across the globe, and has the potential to help nations get closer to achieving their overall climate targets.

Informal transport options such as tuk-tuks could soon me making their ways onto nagigation apps.

This is particularly true when taking into account that transport has the highest reliance on fossil fuels of any sector globally — accounting for 37 percent of carbon emissions from end‐use sectors in 2021. In 2018, cars and similar forms of transport contributed roughly 888 million tonnes of greenhouse gases in the EU alone. These astronomical carbon emissions expatiate the climate catastrophe, impact health through pollution, destroy ecosystems and consume vast amounts of energy-intensive resources like aluminium, steel and plastic.

However, this clear climate benefit doesn’t necessarily translate to those with power. Ted Johnson explains that Trufi has faced challenges convincing authorities as to the usefulness of their aims:

“Transport authorities in many cities have yet to become enthusiastic about the possibilities of the data we generate. We can fix their blind spots; the things they don’t know they don’t know about what is going on in their city”.

However, he feels determined that Trufi will continue with their mission to democratise public transport across the globe in spite of local authorities slowing them down;

“We don’t let the indifference of transport authorities dissuade us from working in a city. It’s nice to have a transport department as a partner, but if we don’t we can move ahead, create the data, and develop an app without them”.

Making public transport convenient, practical and reliable is an essential step towards getting fewer cars and private vehicles on the road. Transparency and knowledge-sharing are two of the greatest tools we have to modernise and digitise mobility, move forward with the mobility transition and to reach our climate goals before it’s too late.