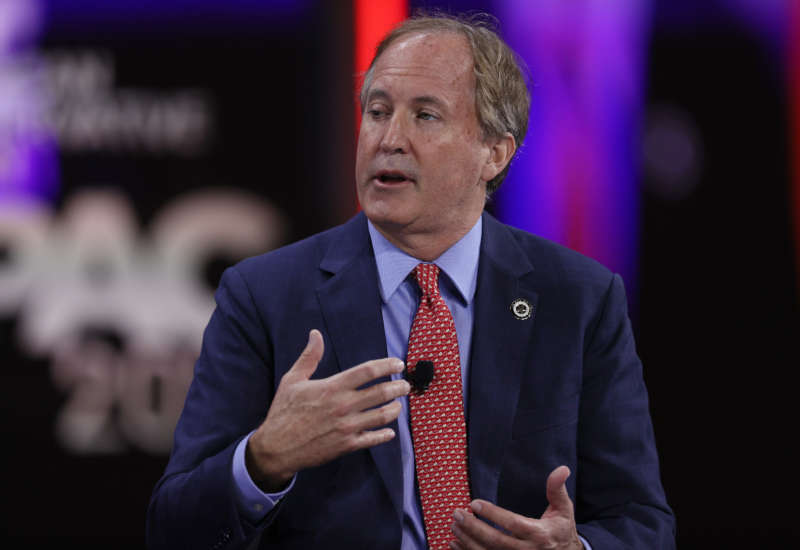 Conservative Texas Attorney General Ken Paxton said on Friday that, had his office not blocked Harris County from sending out mail-in ballot applications to all of its registered voters, Donald Trump would have lost the state.

Paxton told former Trump adviser Steve Bannon in a podcast that blocking the applications was instrumental to Trump’s win, because otherwise the state “would’ve been one of those battleground states that they were counting votes in Harris County for three days and Donald Trump would’ve lost the election.”

“If we’d lost Harris County—Trump won by 620,000 votes in Texas,” Paxton said. “Harris County mail-in ballots that they wanted to send out were 2.5 million, those were all illegal and we were able to stop every one of them,” he continued, falsely conflating ballot applications with ballots.

Harris County officials announced last August that they planned to send mail-in ballot applications to all 2.4 million of its registered voters. The county houses Houston and is the third most populous county in the U.S.

A lawsuit brought by Paxton on behalf of the Republicans to block the plan succeeded, however, and the county was barred by the courts from sending the unsolicited applications. The effort to widen voting access, Paxton’s office argued, would confuse voters. (Several states sent out not ballot applications but actual mail-in ballots automatically to voters last year without causing widespread fraud or confusion.)

Meanwhile, Texas and its largely Republican state officials had changed many voting rules several times before the 2020 election. Paxton led the charge in the state against no-excuse absentee voting and enacted a policy that was “a recipe for disaster,” as Slate wrote, when Texas disallowed people from filing for an absentee ballot if they were not considered at high-risk for complications from COVID-19 — just months before the election.

It’s unclear if Trump would have actually won the state if Harris County had been allowed to follow through on its plan to make voting more accessible. While President Joe Biden won the county by a 13-point margin or nearly 220,000 votes, with record-breaking voter turnout, Trump carried the state with over 600,000 votes.

Regardless of whether the results would have been any different for Biden had Harris County been able to send out mail-in ballot applications, Paxton’s statement about the election results seven months after the fact is revealing of how conservatives view elections and voting rights. Rather than ensuring that elections are conducted fairly, they openly support blocking access to the ballot by any means necessary, especially among voters in more Democratic leaning and nonwhite areas. Paxton, after all, is the same person who sued to disenfranchise millions of voters in battleground states following Biden’s victory in the 2020 elections.

Regardless of whether Paxton’s lawsuit against the mail-in ballot applications handed Trump his victory in Texas, it was certainly one more tool in the GOP’s voter-suppression toolbox for the state. Analyses have shown that Texas is the hardest state to vote in, with restrictions like strict voter ID laws, limits on ballot drop-off locations, and mail-in ballot eligibility requirements. Moreover, Republican-led gerrymandering has worked to further suppress Democratic voters in the state.

Recently, Texas Democrats walked off the legislative floor in an attempt to block yet another voter suppression bill that their Republican colleagues tried to ram through the legislature. In the wake of widespread outrage over provisions in the bill that will affect the voting rights of millions — such as limits on voting on Sunday mornings, which critics point out is a clear attempt to restrict the Black vote — Republicans have made the absurd claim that it was just a typo.