How Far Will the GOP Go to Steal the 2022 Election? 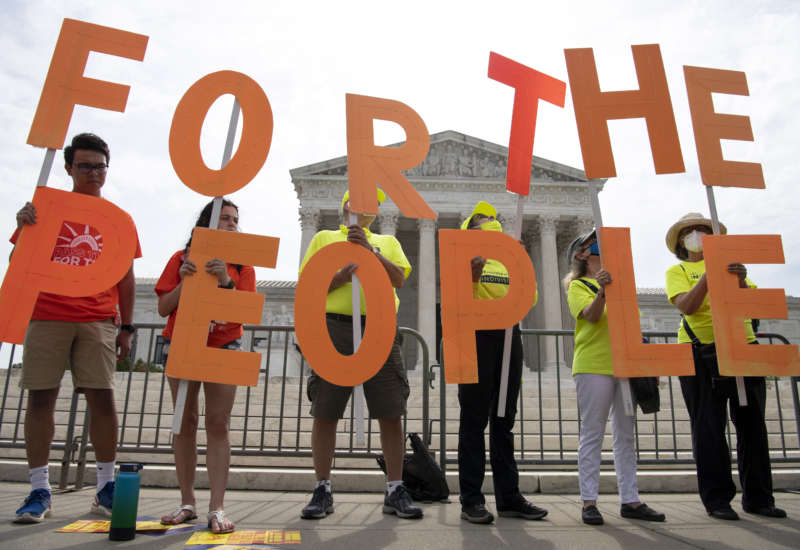 How far will the GOP go to steal the 2022 election?

The corrupt Republican Party, a wholly-owned division of corporate and billionaire America, has dropped all pretense of having any governing ideas that will help or improve America.

Instead, they’ve gone all-outrage, all-the-time and believe that getting white people all cranked up about America’s racial history will provide a veneer of “issues” while they work hard in the background to rig and then steal elections.

This is not new for the GOP.

Back in the 1960s they were hysterical about young people smoking pot and “open homosexuality.” And they were doing everything they could to block people of color from voting through programs like William Rehnquist’s Operation Eagle Eye that involved standing outside polling places and “challenging” people of color, thus forcing them to go home and get ID before they could vote…on the accurate assumption that most wouldn’t return. (This was before ID laws; you only needed ID to register to vote, and the biometric of your signature was how you verified identity on voting day.)

In the 1970s they were freaking out about Black people protesting police violence: every single “riot” through the late 60s and early 70s was triggered by an incident of police violence against unarmed Black people. Nixon fed his “Southern Strategy” in 1972 with poisonous rhetoric about “burning cities.”

Throughout the Reagan 1980s Republicans worked hard to destroy labor unions, cut taxes on the rich while raising taxes on working-class people, and freaked out even more about Black people (see George HW Bush’s infamous 1988 “Willie Horton” ads). And abortion; with Reagan’s 1980 election, the GOP went from pro-choice to pro-forced-pregnancy.

The 90s saw the GOP hysterical — positively hysterical — that President Clinton might have had sex with a consenting adult in the White House and lied about it. They were also working as hard as they could to ship factory jobs overseas (with, stupidly, help from Clinton) because de-industrializing America would destroy our labor unions, who generally supported Democrats. And, of course, they were getting “tough on crime” with stop-and-frisk and “three strikes” to make life miserable for Black people…who then could no longer vote because they’d been busted for a crime.

In 2001, Osama bin Laden gave the GOP a huge gift with 9/11, and the Bush administration and Congress reacted exactly as bin Laden had publicly predicted: wasting trillions of dollars, starting unnecessary wars, and dialing back on the civil liberties that have historically been at the core of American values. And, of course, when President Obama was elected in 2008 they went nuts again about Black people.

The second decade of the 21st-century saw the GOP fully embrace open and naked fascism with the 2016 election of Donald Trump, who then doubled down on his party’s racism with attacks on Muslim Americans, Hispanic Americans, Asian Americans, and, of course, Black people, both in America and in what he called “shithole countries.”

But where they’re going now to suppress the vote of non-white people is so over the top that even Barry Goldwater or Richard Nixon didn’t dare try it.

In Arizona they’re in open violation of federal law, “inspecting” actual ballots and voting machines and even hauling some of them off to a “cabin in the woods in Montana” for “more careful examination.” You can safely expect that any day now they’ll tell us that Trump “actually won” Arizona, and then the race will be on to “inspect“ ballots in other swing states.

Down in Florida Republicans have been putting up “ghost” candidates and it appears they successfully used them to win two or three legislative state elections. This scam involves finding some random person who has the same last name as the Democratic candidate and getting that person on the ballot to confuse voters and split the vote against the actual Democrat.

Meanwhile, 14 states have now passed laws (with another 30+ pending) to make it harder for young people, older people, Black/non-white people and low-income folks to register, to keep their names on the voter rolls, and to vote. In many of those states they’ve gone so far as to give openly partisan Republican officials the power to decide which votes will be counted and which votes will be discarded based on their own personal “suspicion.”

Their newest strategy for the 2022 election is to freak out and piss off white people by falsely claiming that progressives, Democrats and Black people want to “teach white kids that they’re racist” and “should be ashamed of being white.” Republicans call this “Critical Race Theory” although it’s not; this “definition” of CRT is entirely manufactured by the GOP, and their faux outrage is pure politics.

The GOP has been running scam after scam for 70 years now; Dwight Eisenhower was the last legitimately elected Republican president, as I document here. They’re going to try to pull it off again in 2024, but the prize in 2022 is the House and Senate — and state legislatures and governorships.

In several states, like Wisconsin, Michigan and Pennsylvania, even though the majority of people statewide vote for Democrats, Republicans still control both the state Houses’ and Senates’ as well as a majority of those states’ congressional delegations to DC because of “surgically precise” mostly race-based GOP gerrymandering.

And lording over the entire enterprise is a network of right-wing billionaires that has more employees, more offices and a larger budget than the GOP itself. The media almost never mentions them and they operate largely invisibly, but they are the dark-matter mass that deforms the orbit of American politics.

The right-wing billionaires don’t much care about race, but gleefully have their think tanks and media outlets like Fox use lies about CRT and other racial issues (“Replacement Theory”) to get people out to vote for Republicans who will then give the billionaires more tax cuts and deregulation.

Which brings us back to the question that opens this rant. “How far will the GOP go to steal the 2022 election?”

All you have to do is look at what they did on January 6, and how seriously they’re now paddling to pin the blame on antifa or the FBI or anybody other than themselves, to know the answer. But it also goes even beyond what the FBI calls open “terrorism.”

Now the Texas GOP is trying to recruit an army of 10,000 “poll watchers” to show up at polling places in minority and student neighborhoods during the 2022 election; prison tats, baseball bats and bullhorns are optional but no doubt welcome. What’s happening in Texas is being replicated in other states across the nation.

Election workers and volunteers all across the country, but particularly in swing states, are getting death threats and quitting in droves, to be replaced by GOP and Qanon operatives. One in six election workers has received a threat and one in three is thinking of leaving their job. This is all at the same time 14 GOP states have increased the power of these election workers to turn away voters or simply refuse to count their votes.

And now the NY Times is reporting that in Georgia and other states, GOP officials are actually firing and removing Black elections officials in largely-Black areas and replacing them with white Republicans. Georgia Republicans are “disappearing” Black election workers.

Meanwhile, Republican politicians and billionaire-owned right-wing media are doubling down on their lie that Critical Race Theory is “a way to make white people feel bad.” This is just the 2021 version of the “political correctness” (PC) Limbaugh and the right used to complain about in the 1990s when it became unacceptable to use the N-word and other racial slurs in white circles. They’re openly bragging these lies about CRT will mobilize white voters to show up for the GOP.

Legal or not, moral or not, consistent with American values or not, honestly or blatantly dishonest, they’ll do whatever it takes to seize and hold power.

The For The People Act will clean up a lot of this, but not the GOP’s resetting how election systems work in the states so GOP officials can simply throw out votes from precincts or areas they simply “believe” (but cannot demonstrate or prove) have “fraud” (also known as “Black voters”). That’s going to require additional federal legislation.

The next few weeks are critical and we all must contact our members of Congress and raise hell. The Congressional switchboard is 202-224-3121. Americans who care about the fate and future of our republic damn well better get active now.

Square to buy Afterpay, which offers a ‘buy now, pay later’ service, for $29 billion in stock