Explosive Growth of Toxic Algae Threatens Water Supplies Across US 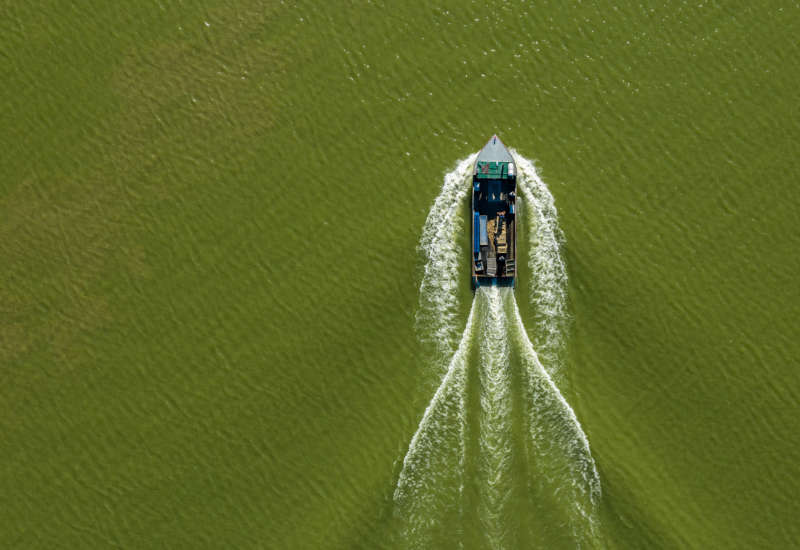 With a vast portion of the United States coping with exceptional drought this summer, conditions are ripe in many places for harmful algal blooms, bringing additional threats to already-stressed water systems and increased health risks for communities.

The blooms are in large part fueled by phosphorus and nitrogen nutrient runoff from industrial agricultural operations, which provide a feast for cyanobacteria, many of which use nitrogen as they obtain energy through photosynthesis. To protect humans and animals from potentially lethal effects of the blooms, officials have closed beaches in Wisconsin and temporarily shuttered shellfish harvesting in Florida. Annual blooms in Oregon have contributed to what has become a full-blown water war at the California border.

To the possible relief of residents living in parts of Ohio, Michigan and Ontario, many of whom have come to intimately know the telltale stench and economic impacts that wash up when a toxic soup of algae blankets the water, scientists with the National Oceanic and Atmospheric Administration (NOAA) on June 30 predicted a lower-than-average algal bloom in Lake Erie this year.

But a growing body of environmental health research links harmful algal blooms across the world to chronic health conditions spurred by microcystin: a kind of cyanobacteria linked to liver failure and increasingly, cancer. Some residents in downstream communities who have lived through past algal bloom-spurred water crises are still bracing for the worst.

Alicia Smith is executive director of The Junction Coalition, a neighborhood organization focused on social, environmental, economic and peace education that formed in response to the Toledo, Ohio, water crisis in 2014, which left 500,000 people without drinking water. “Seven years later we still hold our breath wondering if in July, August and September we will get a notification that we can’t drink, touch or bathe in the water,” Smith told Truthout.

Smith estimates that a majority of community members in her area in Toledo, known as the Junction neighborhood, were not aware of dangerous levels of microcystin in the water at the time. “We had to get football players and basketball players from our local schools to help canvas and drop off water,” she said.

Since then, in an attempt to avoid another algal bloom-fueled water crisis, a new regional commission has planned to invest in improvements to its water treatment facilities, including a $100 million new water intake system and $70 million water towers, as the Toledo Blade reported. But the cost is being passed off on city residents, whom the Blade estimated would pay double the cost of 2019 water prices by 2025.

For many Toledo residents, those prices are prompting an affordability crisis, Smith said, noting that residents still worry that water flowing through the tap may be making family members sick.

A Burst in Blooms?

Algal blooms are nothing new. According to a June article in Nature, Japanese explorers reported “red waters,” known now as “red tides,” as early as the year 731. But agricultural runoff from industrial farms and lawns and a lapse in limits and enforcement around nutrient runoff may be leading to bigger blooms. Research by the United Nations Intergovernmental Oceanographic Commission has suggested that the harm caused by blooms strongly correlates with the growth of the aquaculture industry.

The tame 2021 NOAA prediction for Lake Erie is based in part on lower-than-average March and April rains this year, which brought minimal phosphorus discharge. Hans W. Paerl, a professor at the University of North Carolina Institute of Marine Sciences, told Truthout that, at the end of the day, the NOAA algal bloom forecast is only a prediction. After a dry early spring, May and June ended up bringing higher-than-average rainfall and with it, nutrients, such that if a significant drought were to set in, conditions could change — though drought conditions in northwest Ohio remain more moderate than much of the rest of the U.S.

The kind of extremes that the climate crisis brings makes the NOAA’s job a tough one, Paerl said, and means the bloom prediction could swiftly go awry. “If the water suddenly slows down, well then those nutrients are going to be sitting in the lake, you know, ready to support a bloom.”

Through Water, Through Air

“Ohio has a very chronic problem,” Jiyoung Lee, an environmental health sciences professor at Ohio State University, told Truthout, as does much of the rest of the world.

Lee has been studying cancer data in the U.S. and in South Korea for the past 10 years. Together with a wide-ranging team of collaborators, Lee has found that microcystin strongly correlates with increased rates of liver cancer. In a 2020 article, the team compared cancer data from Ohio residents diagnosed with a malignant tumor between 2000 and 2014. They linked those cases to respective census tracts, allowing the team to connect a given person to their drinking water source.

Using satellite sensing to generate a list of surface water sources with visible cyanobacteria blooms from 2002 to 2011, Lee’s research team found that people whose water came from lakes and rivers impacted by algal blooms had a 17 percent higher incidence of liver cancer in comparison with those estimated to receive groundwater — a source coming from cooler and darker underground sources where algal blooms are not prevalent. Census tracts estimated to be served by bloom-impacted waters were also linked with higher levels of poverty and more likely to be coded as non-white.

Lee says exposure is commonly understood as occurring by sipping contaminated water, eating fish living in impacted ecosystems, or coming in physical contact through recreational activities like swimming or angling.

But exposure happens in more subtle ways too. Now, Lee is studying how the use of bloom-impacted water to irrigate crops like carrots and lettuce might also be contributing to the incidence of liver disease. The research is particularly pertinent given that 70 percent of freshwater withdrawals around the world go to irrigating agricultural fields, according to the United States Geological Survey. “We need to look at [exposure] in a more holistic way,” Lee said, noting potential links between other cyanotoxins and neurological conditions like Parkinson’s and Alzheimer’s.

A 2020 review by Paerl found that people might face exposure to toxins in even more passive ways, by inhaling aerosol particles from bloom-impacted waters, including in interior urban spaces.

While there is no one-size-fits-all fix for harmful algal blooms, Paerl said; there are plenty of what he calls “non-rocket science solutions,” like leaving native vegetation to serve as a buffer between development and waterways rather than carpeting the ground with grass, and ensuring that that septic systems are not leaking into water systems.

Most essential, Paerl said, is reducing the inputs that lead to algal blooms. “The knob we can tweak is the nutrient knob.”

Kristy Meyer is associate director of Freshwater Futures, a nonprofit focused on building political power to promote water democracy and empower residents to protect the Great Lakes. She says the Biden administration should expand which waters qualify as “Waters of the United States” — those that are protected under the Clean Water Act. In 2020, the Trump administration stripped federal protections for wetlands and streams. “I think of Lake Erie like a heart,” Meyer said. “If you cut off part of the capillaries, or the arteries, the heart starts to die. That’s basically what we’re doing when we roll back the Waters of the U.S.”

A new, more expansive rule, would allow regulators to set a daily limit on nutrients for smaller water bodies like wetlands and streams, requiring industrial-scale operations like factory or monocrop operations to figure out how to decrease what they’re releasing to a certain level or face consequences. Meyer also suggests that the next iteration of the farm bill, set to expire in 2023, should include provisions requiring agricultural operations receiving federal subsidies to be subject to a nutrient monitoring plan. Existing federal law sidesteps the nutrient runoff problem, as the Associated Press reported in 2017.

Increased protections are also needed from a public health standpoint, Toledo residents say. According to the Ohio Environmental Protection Agency, drinking water is safe for adults so long as it contains less than 1.6 microgram per liter of microcystin. The World Health Organization’s limit is 1 microgram per liter. No health guidelines yet exist in the U.S. spelling out safe levels of microcystin in food, a guideline that researchers like Lee would like to see established.

Smith says health standards that allow for any level of a toxic substance to enter human bodies are not good enough from a justice point of view, given the legacy of health disparities that map onto race and class in the U.S.

“We always have these wonderful numbers: Five [micrograms per deciliter] of lead is allowed. That’s better than, you know, 15…. But zero is the amount of lead that is safe for consumption,” Smith says.

In the same sense, Smith contends that no level of microcystin is safe for consumption, and that local, state and federal governments should work toward fully eliminating it, and other toxins, from water and food systems.

“Zero maggots is what I want to eat,” Smith said.