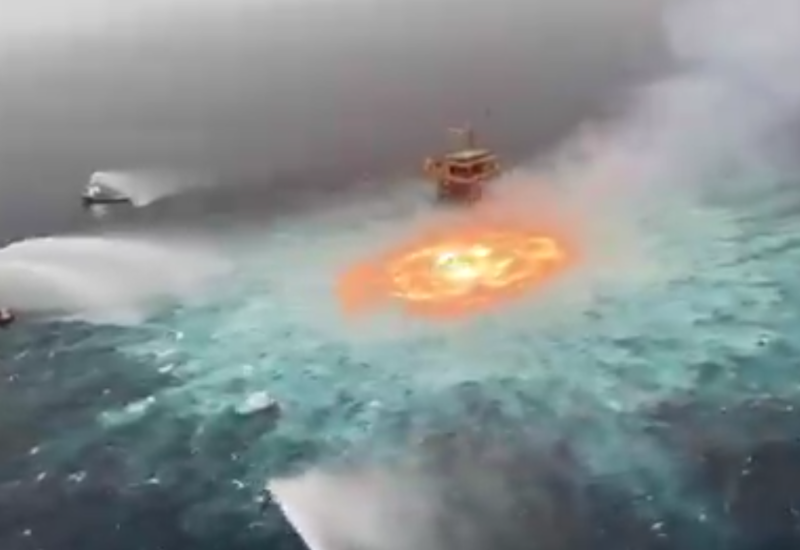 A fire that raged for hours in the Gulf of Mexico Friday offered the latest illustration of the climate emergency and the urgent need to end fossil fuel extraction and invest instead in burgeoning renewable energy industries.

The “eye of fire,” as news outlets and observers on social media called the blaze after Pemex publicized the incident Friday night, happened about 150 yards from a drilling platform in the Ku-Maloob-Zaap offshore field. According to Bloomberg, the field produces more than 700,000 barrels of oil per day.

It took emergency workers about five hours to put out the flames.

“Having to put out a fire in the middle of the Gulf of Mexico feels just too difficult to believe,” tweeted HuffPost editor Philip Lewis. “And yet…”

Having to put out a fire in the middle of the Gulf of Mexico feels just too difficult to believe and yet pic.twitter.com/8OFNNiKyrj

“The frightening footage of the Gulf of Mexico is showing the world that offshore drilling is dirty and dangerous,” Miyoko Sakashita, oceans program director for the Center for Biological Diversity, told the Washington Post. “These horrific accidents will continue to harm the Gulf if we don’t end offshore drilling once and for all.”

Pemex has seen production declining recently, according to Bloomberg, with output falling every year for the past decade and a half and putting the company into $114 billion in debt.

Entrepreneur and fair wage advocate Dan Price catalogued several of the past week’s climate-related emergencies, including the fire in the gulf as well as deadly heatwaves in the Pacific Northwest and Canada, which sparked outraged calls for climate action in recent days.

“The Gulf of Mexico is on fire, it’s 112 degrees in Portland, roads and rails are crumbling from the sun, wildfire and hurricane season are here in record time and people are concerned about the cost of going green,” said Price. “COMPARED TO WHAT?”

The pipeline burst days after undercover journalists released footage of lobbyists from fossil fuel giant ExxonMobil, in which the lobbyists discussed their fight against climate science and their reliance on centrist lawmakers such as Sens. Joe Manchin (D-W.V.), Kyrsten Sinema (D-Ariz.), and Jon Tester (D-Mt.) to ensure the failure of far-reaching climate action legislation.

The progressive advocacy group RootsAction released a version of the Gulf of Mexico fire footage with images of the centrist lawmakers.

We looped the Exxon lobbyist talking about the company’s relationship with Joe Manchin and Joe Biden over the video of the Gulf of Mexico engulfed in flames.

This is our future. Don’t forget who is responsible. pic.twitter.com/wwHcZ5PrRg

“This is our future,” the group said of the image of the world’s largest gulf on fire. “Don’t forget who is responsible.”